Alastair Sim's School for Laughter (Hue and Cry / Laughter in Paradise / The Belles of St. Trinian's / School for Scoundrels)

Film Movement // Unrated // April 14, 2020
List Price: $69.95 [Buy now and save at Amazon]
Review by Stuart Galbraith IV | posted May 22, 2020 | E-mail the Author
Yet another excellent boxed set of classic British films - they're coming out in droves from several labels this year - Alastair Sim's School for Laughter: 4 Classic Comedies is a title that's a bit misleading. Hue and Cry (1947) isn't really a comedy, but rather a boy's adventure-thriller with humorous aspects. Further, Sim's participation in that, as well as Laughter in Paradise (1951) and School for Scoundrels (1960) are supporting roles; put together, he probably has less than 90 minutes of screentime. Only in the fourth film of the set, The Belles of St. Trinian's (1954) does Sim really have the leading role(s), and that one only because Margaret Rutherford couldn't/wouldn't appear in the film, resulting in Sim playing two parts. Sim, however, is in excellent form in all of these movies, which vary from good to excellent. The transfers, likewise, and all but one of the titles boast excellent supplements. 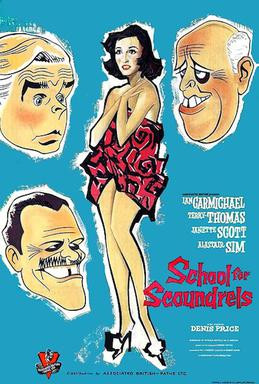 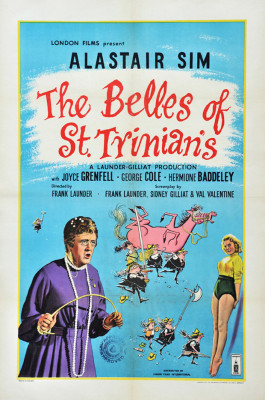 Made soon after the war, Hue and Cry plays like a more sophisticated East Side Kids movie, with a similar (if brighter) working-class gang of kids-teenagers-young adults stumbling upon a secret code used by gangsters. As in innumerable East Side Kids/Bowery Boys movies, when the police refuse to believe their discovery, the gang decides to nab the criminals themselves.

Mostly the film follows Joe Kirby (Harry Fowler), de facto leader of the Blood and Thunder Boys and avid juvenile comic fan. He's particularly enamored of the adventures of detective Selwyn Pike, and while absent-mindedly reading the latest issue is shocked to see gangsters moving crates from the same kind of truck with the same license plate (GZ 4216) as in the very comic he's reading.

When Joe tells his Covent Garden grocer boss, Mr. Nightingale (Jack Warner) and local constable (Jack Lambert) about this and they laugh off the claim, the boys decide to visit the story's author, eccentric writer Felix Wilkinson (Sim). He's surprised to learn that his precious prose is being altered prior to publication, suggesting somebody at the publishing house is tipping off the gangsters.

Directed by Charles Crichton from T.E.B. Clarke's screenplay, Hue and Cry is interesting mainly for its fascinating locations (shot by Douglas Slocombe) of post-Blitz London, with huge sections of the city still in ruins though recovering rapidly. The Covent Garden scenes are almost all in-studio, obviously so, but the footage of the boys scrambling over-around-under and through the rubble, especially during the climax, captures that time and place quite well.

The picture is more interesting than believable seen today, though one imagines young British boys loving it back in 1947. Beyond Jack Warner's cast-again-type role as the cackling secret head of the criminal enterprise, Sim gives the most interesting performance, though limited to one big scene and two short ones later. The quirky writer is delighted to welcome his juvenile fans, offering them ginger pop and delighted to share details about his fictional detective's latest adventure, but terrified when he learns that his stories are used to facilitate a criminal enterprise. One only wishes his character would have joined the boys in their epic climatic battle against the gangsters.

In Laughter in Paradise, nearly an anthology film, Sim again plays a disreputable writer, this time of lurid crime pulp novels. The premise has dying practical joker Henry Russell (Hugh Griffith) leaving his fortune to his four surviving relatives. However, as detailed by executor Endicott (Ernest Thesiger) it's on the condition they must first spend 30 days performing tasks contrary to their nature. His sister, Agnes (Fay Compton), who is cruel and unforgiving toward her maid (Charlotte Mitchell), is tasked with working as a domestic servant herself for 30 days. Rakish gambler Simon (Guy Middleton, a prototype for later bounders like Terry-Thomas and Leslie Phillips, the latter playing the part in the 1970 remake) must marry the first woman he speaks to. Mild-mannered bank employee Herbert (George Cole), compelled to don a mask and brandish a toy pistol, must obtain his bank manager's keys for two full minutes. Finally, law-abiding writer Deniston (Sim) has to get himself arrested and spend a month in jail.

The improbable story, with potentially ruinous consequences for its participants and others, isn't exactly believable, especially the Herbert story, but it's occasionally amusing. Sim is a delight trying unsuccessfully to get arrested, an old chestnut of film comedy, to which Sim adds a new wrinkle through his wonderfully funny expressions of embarrassment and nervousness. A long sequence at a department store is particularly amusing. The business with Agnes working for irascible Scot Gordon Webb (John Laurie) is also good, mainly for the payoff of Agnes coming to realize just how cruel she's been toward others.

The film's other claim to fame is the brief appearance of Audrey Hepburn, who has a couple of lines and scenes as a pretty cigarette girl. Though given an "and introducing" credit her part is tiny and, in any case, she had similar bit parts in a couple of films before this.

The Belles of St. Trinian's was a big success, leading to four sequels produced over the next quarter-century, and a reboot beginning in 2007. Adapted from Ronald Searle's satirical cartoons, the movie revolves around efforts to keep the Barchester-based private girls school solvent, despite its hellion student body and disreputable staff.

Sim plays both headmistress Millicent Fritton and her bookmaker twin brother Clarence, each short on cash and deeply in debt. Millicent conspires to steal the spending money of Fatima, newly-arrived Princess of Makyad, an Arab nation; while Clarence becomes involved with a plot concerning the Sultan's racehorse, which the girls eventually hide in their dormitory. A subplot has a policewoman (Joyce Grenfell, Sim's fiancée in Laughter in Paradise) working undercover as a teacher, hoping to expose the school's misdeeds, including using the science laboratory to produce homemade gin, which former bootblack Flash Harry (George Cole) sells on the side.

The picture works best in its broadly colorful characterizations, like monocle-wearing science teacher Miss Wilson (Beryl Reid). Indeed, so does the picture overflow with cartoonish types many recognizable talents barely have any lines. Among those in the blink-and-you'll-miss-them cast: Hermione Baddeley, Renée Houston, Irene Handl, and Joan Sims as teachers, Michael Ripper as a jockey, Sid James as a racing associate and, though I didn't spot them, Dilys Lane and Barbara Windsor as teenagers. Even Searle himself has an unbilled cameo.

School for Scoundrels (with the onscreen subtitle Or How to Win Without Actually Cheating is by all odds the best film of the set, as well as providing Sim with one of his best film roles. Adapted from Stephen Potter's popular "Gamesmanship" books, the movie stars Ian Carmichael as Henry Palfrey, who enrolls in the "School of Lifesmanship" in Yeovil, founded by eccentric Dr. Potter (Sim). The school's purpose is to train young men the science of always being "one up" on one's opponents, i.e., the art of making others feel inferior. In flashbacks Henry explains to Dr. Potter the circumstances that brought him there.

Henry is in love with April Smith (Janette Scott), but at a swanky, pretentious restaurant they run into an old acquaintance of Henry's, Raymond Delauney (Terry-Thomas), who painfully muscles in on Henry's romance, mercilessly embarrassing him over dinner while impressing April with his supposed worldliness and fancy sports car. (In fact, it is an altered Aston Martin DB3S.) Henry hopes to impress April by buying a car of his own, but two slippery salesmen (Dennis Price and Peter Jones) sell him a garish lemon, a 1924 "Swiftmobile," which strike April and Raymond as pathetic instead of posh. At the school Henry is taught all manner of ingenious tricks of the trade, which he then applies against Raymond (and the car salesmen) in the second-half of the story.

The screenplay, credited to actor-turned-producer Hal E. Chester and Patricia Moyes, but largely written by Frank Tarloff and Peter Ustinov, works so well partly because of the wonderful cast, but also because watching Henry's parade of big and little humiliations at Raymond's hands in the first half is genuinely painful, making his revenge (and Raymond's comeuppance) all the more delightful. When Henry next tries his "schooling" on April it throws off the audience's sympathy for the character; boorish, conceited Raymond is, surely, fair game, but not sweet and innocent April.

Terry-Thomas delivers what may be the defining performance of his film career, a role that forever typecast him as cads, rakes, and bounders, and indeed he's mesmerizing in his passive-aggressive awfulness. But Sim is equally delightful, his school principal as subtly played as his two parts in St. Trinian's were (comparatively) broad. Watching him study Henry like a microscope slide and subtly demonstrate his one-upsmanship skills is a big part of the film's fun.

Film Movement's boxed set is licensed from StudioCanal, who provided the restored video masters. All are in black-and-white, and all but School for Scoundrels (in 1.66:1 widescreen) are 1.37:1 standard frame. One would think St. Trinians should also be widescreen, but Ronald Searle's drawings over the opening titles are framed for 1.37:1, as appears to be most of the picture. Audio is LPCM 2.0 mono with no subtitle options, and the discs are region "A" encoded.

Laughter in Paradise has no supplements, but the others are fairly packed. On The Belles of St. Trinian's there are video interviews with film historians Geoff Brown, Melanie Williams, and Steve Chibnall, along with Meredith McKendrick (Sim's daughter) as well as the featurette "The Girls of St. Trinian's," which includes several of the actresses, now all pensioners; School for Scoundrels includes a trailer and interviews with film critic Peter Bradshaw, Terry-Thomas biographer Graham McCann, and Stephen Potter's grandson Chris; Hue and Cry includes a video interview with Chibnall and a locations featurette. A nicely designed full-color booklet with essays on each film is also included.

Despite the misleading title, Alastair Sim's School for Laughter is another unmissable set of classic British films ripe for rediscovery in the U.S. Highly Recommended.