This little-seen thriller released in 1989 is sort of like that same year's Dead Calm in an RV instead of a boat. Husband and wife Dana (Edward Albert, son of Eddie) and Rita (1980 Miss Universe Shawn Weatherly) are drifting apart but trying to stay together for the sake of their son Kevin (Matt Norero). Dana figures a trip up the California coast in their RV is just the thing to keep the family together. One of their first stops proves to be a big mistake though, as Kevin goes off exploring and runs into young drifter Eric (Maxwell Caulfield, the Cool Rider from everyone's favorite sequel Grease 2.) Kevin's immediately fascinated with him for some reason, and first invites him to join his family for their home-cooked dinner, then gets him to ride with them at least for a while. At first Eric seems nice enough (and the cover picture on this Blu-Ray is far too big a spoiler) but it's not too long til we find out that he's just a little messed up. 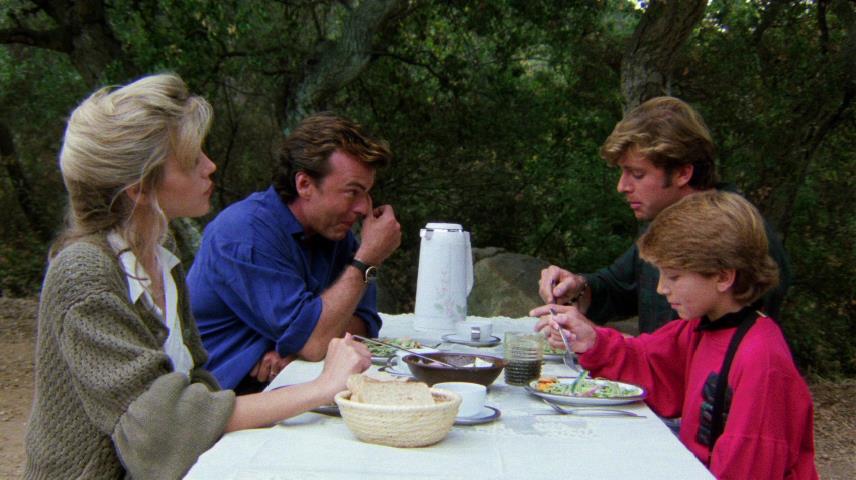 They stop at a campground for the night, with the family intent on sleeping in their nice motorhome. Eric camps outside, and Kevin begs his parents to let him join him. Dad agrees and Mom reluctantly doesn't object as she doesn't want to be seen as the bad guy. This is about where you also realize that this is going to be one of those movies where the characters make some mind-numbingly bad decisions, as if letting this guy come along in the first place wasn't bad enough. The two set out with sleeping bags but Eric says he's going to go "have some fun" before turning in. He stresses that Kevin should just stay there and go to sleep because he might not be able to handle it, but of course he begs to come along- so he agrees as long as he does everything he's told without asking questions. They end up a house where the owners are away, break in and Eric suddenly begins smashing everything in sight then tells Kevin to join in. They run away just as the owners return home to find the place trashed.

Still, the next morning Kevin still thinks Eric is cool and he stays with them as they take off for their next destination. Rita wishes he would leave, and also gets increasingly annoyed with her husband with the whole attempt to save the marriage becoming a bust. Eric sees the marriage falling apart from a mile away and still tries to get close to Rita regardless of what she thinks of him. To not give the rest of the movie away, which is decently suspenseful despite how silly it is, I'll just say that many more bad decisions continue to be made. Matt Norero's enthusiastic but naïve performance, dressed in several outfits from Generra (remember them?) is mainly what kept me from wanting bad things to happen to him, though I felt sorry for his having a mother that was not only so stupid but also smoked. His dad wasn't very bright either. As for Maxwell Caulfield, it's usually amusing to see someone known mostly for playing nice guys get a turn as a psycho, especially one that starts out seeming to be a decent enough person. 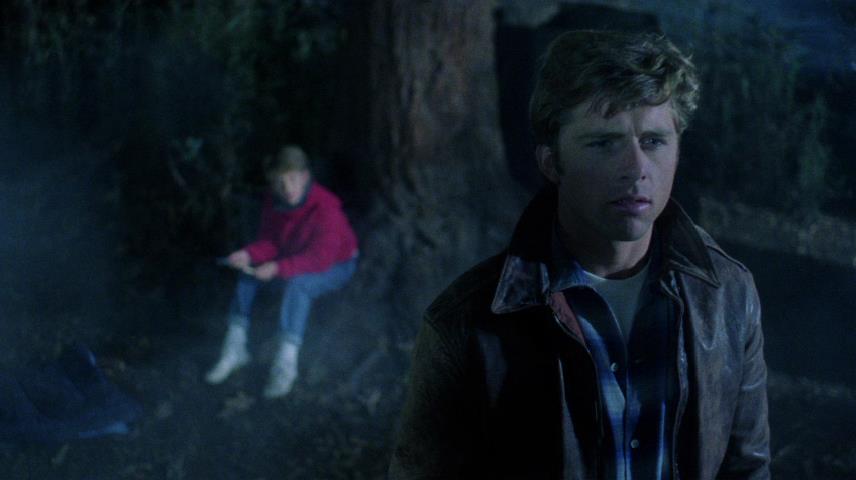 MVD presents Mind Games (its proper 2-word title, although the cover shows it as one) in a full-screen 1.78 aspect ratio, looking decent for the most part. Focus is just a bit off in some shots, colors are bright but not overly so, and bits of dirt appear at times which seem to have found their way onto the original negative. (A nit-pick, this was released by MGM but references to them from the beginning and end have been removed.) The Blu-Ray encoding is mostly artifact-free but some do show up during the final fade-out which is a bit of a buzzkill.

The Ultra-Stereo sound mix is encoded thankfully in 2-channel PCM, which is severely underused on the Blu-Ray format (up to 7.1 channels of uncompressed PCM sound is possible on the format, but only a handful of titles include that. I don't know why it isn't at least used more for 2-channel mixes, especially when my older Pioneer receiver refused to apply Pro-Logic decoding to 2-channel DTS-HD tracks.) It's a rather standard mix, with voices kept centered, a few directional sound effects and ambience in the surrounds during night scenes. Hearing-impaired subtitles with a few typos are included. 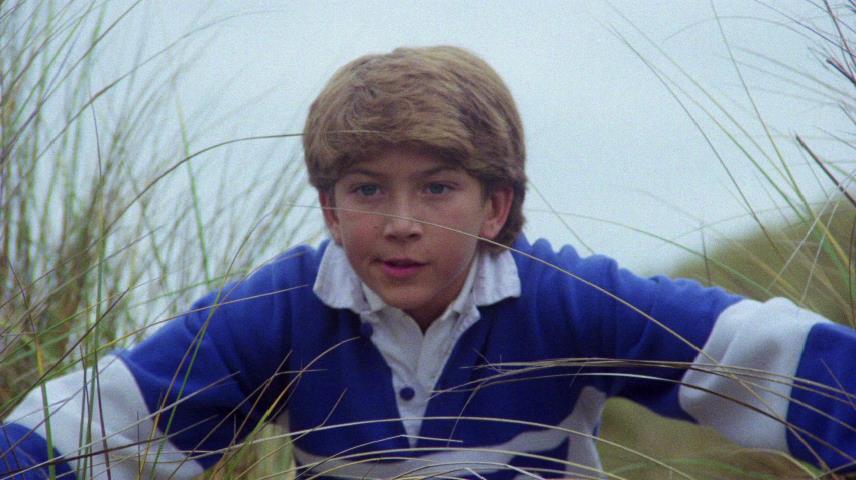 After a messed-up film like this I sometimes appreciate a good dose of reality about it, and this release does not disappoint with a "Making of" piece that actually runs longer than the movie. Sadly it doesn't deliver a whole lot during that time- I would've liked to have seen some production footage or at least photos along with recent visits to the locations, but instead we get interviews (shot on 24fps hi-def video, which I've never been a fan of) with director Bob Yari, producer Mary Apick, and cast members Maxwell Caulfield, Matt Norero and Shawn Weatherly, all speaking from their homes and edited together. You get to hear a few interesting bits such as how it was sometimes difficult to shoot in remote locations without having cell phones available, and details on how some scenes were done such as the house-trashing. A separate 33-minute segment focuses on director Yari, who talks about how his venture into filmmaking was soured a bit after Mind Games had a very sparse release (I don't remember it playing in theaters, nor even seeing it in video stores) but eventually returned as a producer and has been part of many well-known movies- five of which are also available on Blu-Ray from MVD and have trailers included here: Find Me Guilty, The Illusionist, Resurrecting the Champ, Shortcut to Happiness and Winter Passing. The trailer for Mind Games is also included, but it's sourced from a poor-quality YouTube upload. Incidentally this is the first disc I've seen from the MVD Rewind Collection, and I have to give them props for copying the cover format of Media Home Entertainment tapes, even though that design was gone from them by the time this movie was out and they had been absorbed by CBS/Fox Video. 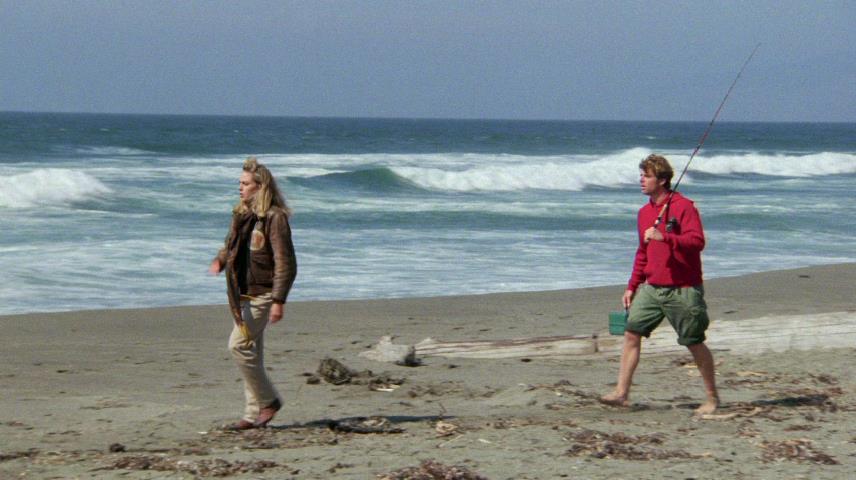 Mind Games is a decent piece of 80s cheese from that decade's final year, and a bit disturbing although the events could have been prevented with just a bit of common sense which these characters seem to have lacked. My opinion of this movie would likely be much lower had it been made more recently. Having passed me by until now, despite having a rather encyclopedic memory of that era's movies, it's deserving of the decent release it's been given here.