Paramount // Unrated // May 5, 2020
List Price: $49.98 [Buy now and save at Amazon]
Review by Stuart Galbraith IV | posted July 15, 2020 | E-mail the Author
And so with this CBS/Paramount DVD release, Gunsmoke ends its unprecedented 20-year run, wrapping up an incredible 635 episodes. While a couple of series have since beaten Gunsmoke, namely Law & Order, The Simpsons, and Law & Order: Special Victims Unit, with more seasons and/or episodes, that doesn't take into account Gunsmoke's far greater per-season output in its early years, or the much longer running times of both the half-hour and later hour-long episodes. Nor does it factor in star James Arness's appearance in every episode (and later TV movies), or the long runs of so many regulars, including supporting and bit players.

Regardless, the label's commitment to finish out Gunsmoke on DVD deserves our gratitude, especially their wise decision to remaster the entire series, and to even add some fine extra features in its last seasons.

Moreover, in the last couple of seasons, a kind of Western poetry, a lyricism began turning up in occasional episodes. In Gunsmoke's 20th and final season no episode does this better than "Thirty a Month and Found," an elegiac tale of cattle drivers doomed by progress. Gene Evans (Samuel Fuller's Park Row), a fine character actor often underutilized, gives a performance so good if it were a feature film he might have been nominated for an Academy Award, like Ben Johnson in The Last Picture Show.

Gunsmoke is especially astounding when one compares this final season to TV production methods today. A current show often costs $8-10 million per episode, with ten episodes per season. Gunsmoke in 1974-‘75 probably cost in the region of $300,000 an episode or less, and its 24-episode season, 20 hours of filmed show, made for a brutal production schedule. Once Gunsmoke shifted from a half-hour to an hour format, it became impossible to prominently feature star James Arness in every episode - he would have dropped dead from exhaustion.

So, with the shift to the hour format, Gunsmoke became a quasi-anthology series, with many more episodes built around other characters living or passing through Dodge City. Some episodes highlight Arness's Matt Dillon while in other he makes little more than a cameo appearance. Some feature him but none of the other regulars, while other stories focus mostly on Doc, or Festus, or Doc and Newly, or Matt and Festus, etc. In other episodes the guest stars carry the weight of the narrative, while one or two regulars put in token appearances. Scheduling all this must have been a logistical nightmare. It required a careful balancing of scripts and probably multiple episodes shooting simultaneously, so that the main cast members weren't overworked, and could move easily from studio-shot scenes to locations far and wide. 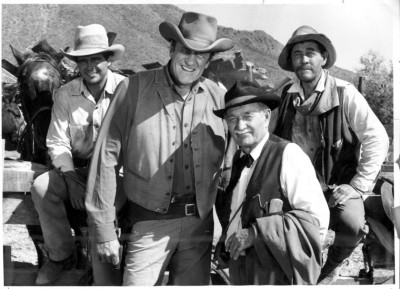 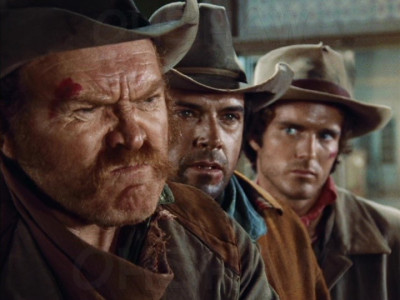 As before, most episodes' stories continue to revolve around one or more of the show's principal characters: Dodge City's Marshal, Matt Dillon (James Arness); cantankerous Doc Adams (Milburn Stone); illiterate hillbilly Festus Haggen (Ken Curtis), Matt's backwoods assistant; and Newly O'Brien (Buck Taylor), Matt's more youthful, handsome deputy. For this last season new opening titles have been created, and like past seasons Arness exhibits much generosity, billing himself last after Stone, Curtis, and Taylor, all of whom this season get warm and welcoming close-ups.

Conspicuously absent is Amanda Blake as Miss Kitty, owner of the Long Branch Saloon. Blake had been with the show its first 19 seasons, but tired of the lack of good teleplays revolving around her character, and doubtlessly the repetitiveness of those that did. Other sources claimed, probably equally true, was that she was fired after balking at a script in which her character was raped. She flat-out refused to do it and producer John Mantley, who disliked her, canned the allegedly difficult actress. With both Blake and Glenn Strange's Sam the bartender now gone (Strange having died in 1973), the Long Branch is one lonely place, throwing the series' balance off slightly. I was surprised to learn that Blake had been coaxed back, agreeing to return for Gunsmoke's 21st season which, sadly, did not come to pass.

The episodes of Season 20 are the usual mixed bag, but the stronger shows are quite exceptional, among the best Western drama ever done for episodic television. As with the last couple of seasons, the season premiere focuses on star Arness. In "Matt Dillon Must Die!" the marshal tracks down an outlaw member of the Wakefield family high in the remote, snow-capped mountains. They capture Matt and their patriarch, Abraham, wild-eyed with grief over the death of his wife, is expertly played by Morgan Woodward, TV's go-to guy for wild-eyed loonies.

Absent from the show beyond the opening credits are Doc, Festus, and Newly, also MIA from the second episode, "A Town in Chains." While it was probably wise to open the season with shows featuring Matt, the absence of everyone else might have hurt the show's ratings; audiences wanted to see Gunsmoke's regulars in every episode wherever possible.

The two-part "The Guns of Cibola Blanca" is a real epic, filmed on location in Old Tucson, Arizona, with Doc and retired saloon keeper Lyla (Dorothy Tristan, in a part all-too-clearly intended for Amanda Blake) taken prisoner by a veritable army of Comancheros. James Luisi, grouchy Lt. Chapman on The Rockford Files, makes a particularly sleazy, imposing villain, and Milburn Stone has many fine scenes as Doc.

The aforementioned "Thirty a Month and Found," beyond Gene Evans's performance, benefits from a beautifully written script by Jim Byrnes, whose lyrical dialogue justly won several awards, including one from the Writers Guild of America. Brynes also wrote "The Busters," another memorable Gunsmoke with John Beck and Gary Busey as lowly-paid bronco busters, Busey's Harve unaware that the abuse he's put his body through has resulted in a terminal illness. Beck's Mitch, armed with Doc's diagnosis, decides to keep the news from his friend, hoping to spend Harve's last days in Dodge. Busey is excellent.

"The Fourth Victim" is a strong episode with Doc apparently the next target of a mysterious, seemingly random assassin. This is one of the relatively few Gunsmokes from this season to evenly feature all of the show's regulars.

Sadly, there would be no "final" episode of Gunsmoke. The last episode broadcast, "The Sharecroppers," is a comical tale with hapless Festus cajoled into plowing fields for lazy sharecropper Dibble Pugh (Victor French) and his equally lazy son (songwriter Terry Williams). It's a fairly funny episode but not at all the fitting series finale Gunsmoke deserved.

Everyone in the cast fully expected to return for the new season, and perhaps three or four more, even. Scripts were put into development, and Amanda Blake was, perhaps, returning. Instead, the trade papers reported the news that Gunsmoke had been cancelled, news that hadn't yet reached the show's cast, including Arness and Stone, who had headlined the series from the beginning.

In color, Gunsmoke once again looks stunning on DVD, with rich color and excellent detail. The Dolby Digital mono (English only) is clean and clear, and the shows include optional English SDH subtitles. The packaging allows viewers to read the episode descriptions inside the snap case.

Once again, CBS/Paramount have provided really good supplements. "Ben and Beckey Talk Gunsmoke Season 20" has Ben Costello and Beckey Burgoyne, authors of, respectively, Gunsmoke: An American Institution (a major reference for this writer) and Perfectly Amanda - Gunsmoke's Miss Kitty: To Dodge and Beyond discussing each season's high points and share other behind-the-scenes information. One only wishes these warm chats had been a part of the Gunsmoke releases from the start.

Also included is an audio commentary by Costello and writer Jim Byrnes for "Thirty a Month and Found," episodic previews, generally in very poor condition, and a photo gallery.

Despite being denied the series finale Gunsmoke so deserved, the final season brings the series to a close not with a whimper, and maybe not quite a bang, but a handful of outstanding shows that proudly rank among the best Gunsmoke. Highly Recommended.