System (aka The Girl-Getters), The

London-born Winner (1935-2013) had a strange career with three distinct periods, the last two parallel with actor Charles Bronson, with whom is most often associated. Winner started out making shorts and, later, modestly-produced but well-received British films like The System, the first of six collaborations with actor Oliver Reed.

Next, Winner began making an uneven series of films in Britain, the European continent, and in America. Several of his early films with Bronson are excellent, including The Mechanic (1972) and the original, often-misunderstood Death Wish (1974), as well as a good if modernized updating of The Big Sleep (1978) with Robert Mitchum. But he also made some terrible films during the decade, including the repellent The Nightcomers (1971) with Marlon Brando, the unfunny Won Ton Ton, the Dog Who Saved Hollywood (1976), and the dreadful horror film The Sentinel (1977).

By the 1980s he became associated with Cannon Films where he did two terrible "Death Wish" sequels (though Death Wish 3 is amusingly over-the-top) and other dreck including the alleged comedy Bullseye! (1990), an appalling waste of the talents of stars Michael Caine and Roger Moore. The high-living, colorful Winner (his autobiography is quite charming) cemented his negative reputation following his death, when three women accused the late filmmaker of sexual harassment while he was still active in films, with Star Trek's Marina Sirtis adding, "I know you're not supposed to speak ill of the dead, but [I hope Winner rots] in hell for all eternity."

Nevertheless, The System shows Winner as a capable and imaginative filmmaker. It's a film deserving of more attention. 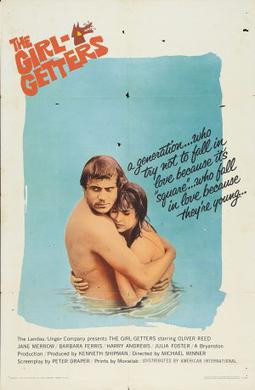 In the (fictional) British seaside resort town of Roxham, a clique of 20-something local young men have developed a "system" to prey upon single (and sometimes married) young women on holiday, scoping out and then "accidentally" meeting on trains and in stations, equitably divvying up the weekend's prospects and moving in for the kill. Most of these girls, sometimes visiting from Germany and elsewhere, are easily won over by these young lads; the girls fantasize of love and marriage while the boys are only interested in casual sex, nothing more or less than another notch in their long lines of sexual conquests.

The leader of the pack, Stephen "Tinker" Taylor (Reed), is a ruthless cad, a wandering photographer who takes snapshots of vacationers then badgers them for overpriced prints of these two-bit mementos. He, too, loves and leaves ‘em, sleeping with Lorna (Julia Foster), who foolishly is all but planning their wedding minutes after he beds her down.

Tinker, however, has bigger fish to fry: he sets his sights on Nicola (Jane Merrow, a role intended for Julie Christie), an upper class free-spirit vacationing with her father (Guy Doleman) who works (though certainly doesn't have to) as a model. Bored, she finds him as diverting and disposable as he regards all his past conquests and, before he knows it, the tables are turned. He falls in love with the unattainable Nicola, who regards him as disposable as he's always been toward his lady-friends. The main thrust of the film is a sad/funny way Tinker's behavior quickly mirrors the women he's treated so shabbily for so long, and his gradual realization that tourists like Nicola use men like Tinker as dispassionately as they use them. More so, really, and the boys on the make aren't even aware they're being taken for a ride themselves.

Class also enters into the story, with Tinker awkwardly visiting Nicola's rented house and encountering boorish upper-class types his same age. After mockingly asking, "Tennis, anyone?" they actually challenge him to a game, where he's humiliated on the court worse than Terry-Thomas's routing of Ian Carmichael in School for Scoundrels.

Released just as Beatlemania was kicking into high-gear in Britain, The System even features an actor (John Alderton) who's the spitting image of Beatle George Harrison, with Alderton playing a character whose girlfriend is pregnant and compelling him to marry. The System has its own valid soundtrack of Merseybeat led by The Searchers, who sing the title track. Filmed in and around Devon, the film has a wonderful semi-documentary air that captures that time and place well. Adding to its cusp-of-changing-Britain feel is the presence of actor David Hemmings, in a minor role as the youngest of the lads who quickly finds new ways to exploit the System.

The cast is uniformly good, though Reed, with his predator-like screen presence and verisimilitude in scenes of violence, is perfectly cast, while Merrow strikes just the right balance, teetering between innocence and heartlessness.

Previously released to DVD by VCI and by Powerhouse Indicator as a Region "B" British Blu-ray last year, Kino's Blu-ray release of The System apparently draws on the same transfer, its film elements inconsistent but generally good in this black-and-white, widescreen presentation. The DTS-HD Master Audio (mono) is fine, and English subtitles are provided on this Region "A" encoded disc.

The only supplement carried over from the Indicator release is a fine, insightful interview with actress Merrow, whose observations about the film are pretty spot-on. Also included is a new commentary track by critic Stephen Vagg and a trailer.

Not quite a lost masterpiece but very good, The System deserves to be better known and this presentation comes Highly Recommended.