Arrow Video // Unrated // July 14, 2020
List Price: $27.99 [Buy now and save at Amazon]
Review by Stuart Galbraith IV | posted August 26, 2020 | E-mail the Author
One of the very best television dramas of recent years is Chernobyl (2019), an almost unbearably disturbing yet gripping and enlightening miniseries about the 1986 nuclear power plant disaster.

Virtually suppressed for decades, Hideo Sekigawa's Hiroshima (1953) shares many of Chernobyl's myriad qualities. Resolutely unsentimental and in no way exploitative, the film is unnerving and powerful nearly 70 years after it was made. Cheap melodrama and polemics are absent; mostly this very realistic film recreates what happened during and following the dropping of the atomic bomb on Hiroshima on the morning of August 6, 1945. The movie straightforwardly presents what happened and that it more than enough. 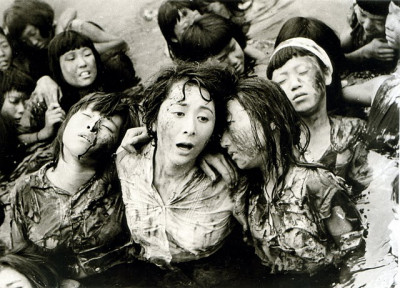 The movie utilizes an effective flashback structure. In present-day (i.e., 1953) Hiroshima, high school teacher Kitagawa (Eiji Okada) is playing a radio program about the atomic bombing for his class, of whom about one-third experienced the blast firsthand. One of them, a young schoolgirl, Michiko Oba (Isako Machida), suffers a nosebleed and is hospitalized, her condition quickly diagnosed as terminal leukemia, almost certainly caused by the Bomb.

So seamless one hardly notices it, the movie then flashbacks to the evening before the dropping of the bomb. Though essentially an ensemble film, a few characters are briefly introduced: Mine Oba (Isuzu Yamada), Michiko's mother, along with her siblings; a soldier, Endo (Yoshi Kato), with a wife and two elementary school-age children, Yukiyo (Masaya Tsukita) and Yoko (Seiko Watari); and Yonehara (Yumeji Tsukioka), teacher at a girls' school.

When the bomb is dropped Hiroshima truly becomes Hell on Earth, and the film doesn't hold anything back. In an instant, everything is forever changed. Endo's wife is buried under the rubble of her collapsed house, she pleading with her frantic husband to leave her to look for their children, even as she's burned alive in the bomb's fiery aftermath; dazed teacher Yonehara leads her surviving schoolgirls to a river where, overcome with radiation poisoning, all slowly disappear into the water, dead; Mine searches for her missing children at their various daycare and schools, but most are already dead, as she'll be soon herself.

One would have thought a Japanese movie from 1953 would have held back in various ways but it never does. The makeup graphically recreates radiation burns on the victims, which grow worse over the days until some characters become almost unrecognizable. It may not be on the horrifying level of Chernobyl but it sure comes within 90% of that miniseries. Women, children, and the elderly are not spared and, indeed, make up the majority of the victims. Immediately after the blast and long after, children unable to move cry out "sensei" ("teacher") and "okaasan" ("mother") but no one answers them. Even those who seemingly survived with only minor injuries will soon be dead, dying agonizingly in bombed-out and ill-equipped hospitals from radiation poisoning.

One also might have expected an angrier, overtly anti-American work, but in merely presenting Hiroshima as it historically and scientifically unfolded, truthful realities are enough, with the militaristic government ludicrously extoling victims that this kind of thing happens all the time in war, and to hurry up and recover so that they might rejoin the war effort. In one scene set far from the damage, a group of scientists inform their military superiors that all the evidence supports the dropping of an atomic device, but the officers angrily label them as defeatists. Disheartened but unable to contradict them, one scientist gazes at a cicada fluttering about the room, banging itself against a window, trying to get out.

Even as the narrative gradually moves forward in time, back finally to present-day Hiroshima in 1953, the movie continues to disturb, with American Occupation soldiers, usually with a Japanese woman under their arm, enjoying a fun day out, touring the devastation, buying grim souvenirs, including human skulls of victims.

Back in the present the audience learns that Endo's son, Yukio (now played by Masayuki Tsukida) with his younger sister survived the bombing (a relationship reminding viewers of the later Grave of the Fireflies), but remains haunted by the experience. He's attracted to a sickly young woman, disfigured by the bomb and shunned by society, and thus unable to marry. Further, when the tool company Yukiyo works at resumes its wartime business of manufacturing bullets, he effectively has a nervous breakdown.

The opening titles, mostly untranslated, reveal much. None of the professional actors get top billing: that is awarded to various community organizations in Hiroshima that appear in the film, including many real victims, including badly scarred "Hiroshima Maidens." And though made entirely independently by a group of labor and teaching unions, the film is remarkably polished, as polished as a big studio Japanese production.

Partly the supportive Hiroshima community ensured this, while left-leaning and communist film talent lent their support also. In contrast to the more artsy, expressionistic Children of Hiroshima (1952) from director Kaneto Shindo, or the special effects-heavy The Last War (1960), Hiroshima special effects are very effective but never intrusive. Director Hideo Sekigawa's direction never calls attention to itself. Of the cast Eiji Okada and Isuzu Yamada, among others, are instantly recognizable to those familiar with classic Japanese cinema, as is the music of composer Akira Ifukube. His main cue, endlessly repeated, turned up again in Ishiro Honda's Godzilla (1954), tying this film's real atomic bombing with the imagined radioactive wake left by Godzilla.

Undoubtedly the film's truthfulness made many uncomfortable. Imperialist Japan is depicted as cruel and willfully stupid, while the present-day students wonder if the victims of Hiroshima and Nagasaki were essentially unwilling guinea pigs of America's military, to test the bomb's effects. The still-controversial subject of Japan's hibakusha ("persons affected by the bomb") led to some Japanese-made science fiction and horror films being suppressed for many years; conversely, recognition for the long-discriminated victims of the bomb even within Japan has continued for more than half a century.

What little distribution Hiroshima did receive often exploited the horror rather than attempt to understand it. Though Children of Hiroshima eventually became available as an English-subtitled DVD in Japan and elsewhere, Sekigawa's film languished in undeserved obscurity.

Considering it was shot on nitrate film stock and held independently and not by a major studio, the black-and-white, standard frame (1.37:1) Hiroshima looks remarkably good, with only minor damage here and there. The mono is fine, and good English subtitles are provided on this Region "A" encoded disc.

The best of the well-chosen supplements is a 30-minute video essay by Japanese film scholar Jasper Sharp called "Hiroshima, Cinema, and Japan's Nuclear Imagination." Buttressed with film clips (including from Children of Hiroshima), excellent stills and poster art, Sharp traces both documentary and fictional films about the bombings of Hiroshima and Nagasaki by Japanese filmmakers, exploring the politics of their filmmakers, financing, intentions, and censorship issues with the Occupation Forces during that period. It's an excellent and highly informative piece. Also included is the 73-minute documentary Hiroshima Nagasaki Download (I, and probably others, first assumed it was some kind of PDF), which looks at survivors living in the United States. Finally, there's an archival interview with actress Yumeji Tsukioka. It's worthwhile but in poor standard definition, as are a few of the film clips in Sharp's video essay. An excellent booklet includes essays by Sharp, Mick Broderick, and a filmography of director Hideo Sekigawa.

Essential viewing, Hiroshima is, beyond its subject matter, a long-unseen genuine classic of Japanese cinema, still riveting nearly 70 years after it was made. A DVD Talk Collectors Series title.