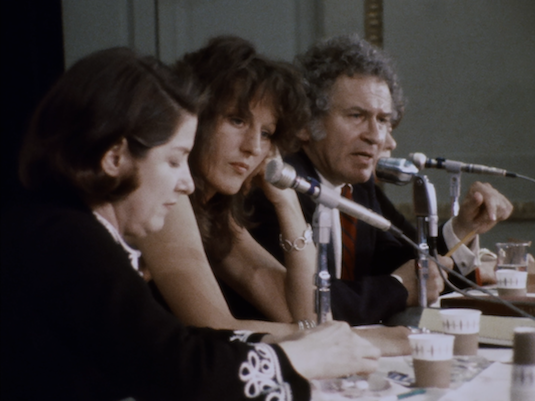 The 1979 documentary Town Bloody Hall, directed by Chris Hegedus and D.A. Pennebaker, is a fascinating recording of a panel discussion held at New York's Town Hall on April 30, 1971. Pitched with basest showmanship as a "battle of the sexes," the topic of discussion is the Women's Liberation movement. Shortly before this event, Norman Mailer published an article called "The Prisoner of Sex," expressing his not very thoughtful misgivings about the movement. In response to the article, four women are assembled to slay the macho beast: then-president of New York's chapter of the National Organization for Women Jacqueline Ceballos, The Female Eunuch author Germaine Greer, critic and lesbian activist Jill Johnston, and old-school New York intellectual Diana Trilling.

The film -- shot by D.A. Pennebaker and crew at Mailer's insistence and without permission of the venue -- distills the 3+ hour event down to roughly 90 minutes. Even with this abridgment, Town Bloody Hall attempts to represent its contributors thoughtfully. The problem is that the conception of the event itself isn't very thoughtful. All five of the panelists have distinctly different conceptions of women's liberation, so everyone is essentially at-odds with each other. It comes clear, too, that Mailer's presence there is pretty much irrelevant, except that he's famous and makes for a wild spectacle. The audience is full of New York authors and literati -- including Susan Sontag, Cynthia Ozick, Gregory Corso (who storms out, yelling, early in the event), Betty Friedan, Anatole Broyard, and Elizabeth Hardwick -- further giving the impression of a schmoozy (if shouty) upscale happening, rather than a serious political forum.

I don't mean to suggest that nothing provocative or real is being discussed. Ceballos offers the NOW platform of the time, suggesting, among other things, that housewives should be paid a basic income for their labor. Jill Johnston performs a sometimes-poetic, sometimes-tongue-in-cheek, stream-of-consciousness "episode," which jumps off from the radical notion that all women are lesbians and profoundly explores aspects of female existence. Germaine Greer is clearly positioned as the self-assured heavyweight thinker best suited to tangle with Mailer, and her main thesis begins with a dissection of the concept of male artists. Diana Trilling, on the other hand, seems the most bizarrely retrograde: she clearly sides with Mailer and uses her time to affirm her belief in Freud's notion of vaginal orgasm as sexual maturity. (Fifty years and countless biological studies later, her assertions are profoundly confusing.)

Meanwhile, Mailer tries to hijack the discussion at every turn to somehow make it about him. When Greer makes a joke about Mailer's family having three boys -- "Norman and his two sons" -- Mailer spends two minutes complaining about it being a cheap shot and (forgive me, but he is) mansplaining how he would craft the zinger better and less cruelly. Of course, elsewhere he calls a woman in the audience "Cunty" as a retort, so decorum is clearly not an actual priority.

The film eventually boils down to an argument between Greer, Mailer, and Trilling. (Ceballos mostly spectates, and Johnston leaves unceremoniously after an impromptu display of three-way lesbian affection is received harshly by Mailer and the audience.) And while Greer isn't afraid to engage in verbal combat, she distinguishes herself by actually thoughtfully responding to the topics at hand. Mailer and Trilling, like many of the famous faces who offer questions from the audience, mostly try to sound smart without really worrying about making the mental effort. Many times, Mailer just runs his mouth in the hopes that the torrent of words will magically find coherence whether or not he has pre-conceived it. He comes off as the ultimate proto-internet-commenter, even unwittingly presaging social media with his declaration that the future will be "nothing but assholes talking to assholes."

While I feel ambivalent about the event it documents, the film Town Bloody Hall is incredibly valuable and often quite entertaining. It has inherent time-capsule appeal, showing both how far and how not-far American society has come in its social and political attitudes toward women. The fact that many of the people who attended this event possibly felt like they really got to the bottom of things just shows why meaningful progress is far from tidy and is actually hard-won.

The documentary also just has some good laughs. The finest comes when author Cynthia Ozick offers a deadpan appreciation of Mailer as a "sacerdotal-sexual-transcendentalist priest" before asking him a question about his balls.

It's a testament to the intelligence and craftsmanship of Hegedus and Pennebaker that, without adding any sort of outside commentary, Town Bloody Hall ends up saying much more about the ideas with which it engages than most of the people who actually speak in the film. 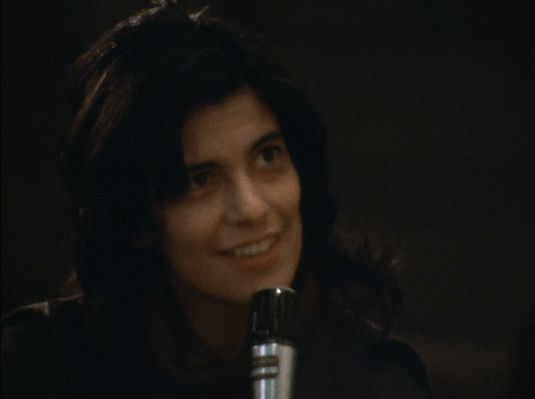 The Blu-ray
Town Bloody Hall is packaged with a fold-out featuring an essay by Melissa Anderson.

The Video:
The AVC-encoded 1080p 1.33:1 transfer is a good presentation of a generally rough-looking movie. Shot on 16mm with only available light, the end product is extremely grainy. In motion, it looks perfectly fine, but I had a little bit of trouble when I made screencaps to accompany this review of finding images that didn't just look like pointillist impressionist paintings. While the grain can get pretty chunky, in general the image has good detail and depth. The color looks lifelike and well-balanced.

The Audio:
The LPCM mono audio has been captured in the same guerrilla style as the visuals, so there are some instances where speech gets garbled or the microphone audio is not effectively recorded. This suits the style of the film, and the digital restoration sounds plausibly faithful to the quality of the source. An English SDH track is provided.

- An entertaining, thoughtful, and irreverent commentary recorded in 2004. Greer shares her memories of the event with Hegedus trying to coax further opinions and reflections out of her. They lose steam in the last 20-30 minutes, with some sizable silent gaps, but overall this is a welcome and worthwhile listen.

Final Thoughts:
In her interview on this disc, director Chris Hegedus says that Norman Mailer admitted to her later that he didn't actually understand what Women's Liberation was in 1971. That kind of says it all. Highly Recommended. 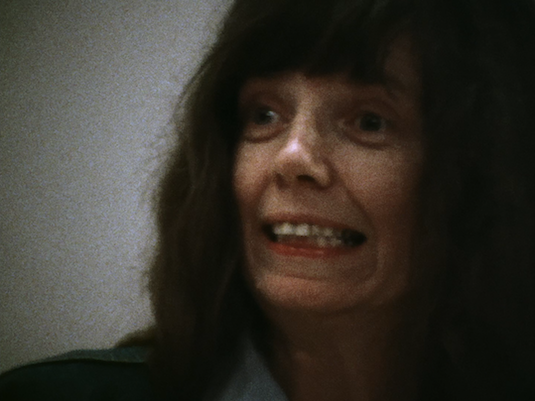