Paramount // R // August 25, 2020
List Price: $9.99 [Buy now and save at Amazon]
Review by Stuart Galbraith IV | posted September 23, 2020 | E-mail the Author
The Gunsmoke franchise did not end with the cancellation of the long-running (1955-75) TV series. Reunion TV movies were in vogue throughout the 1980s, and Gunsmoke was not immune. Gunsmoke: Return to Dodge (1987) was the first of five such films, though the only one that had a strong connection with the original series. The others were Gunsmoke: The Last Apache (1990), Gunsmoke: To the Last Man (1992), Gunsmoke: The Long Ride (1993), and Gunsmoke: One Man's Justice (1993). That meant star James Arness played the same leading role (as opposed to short or cameo appearances) over 37 years. Three of these films, presumably the first of two volumes (?), repackages earlier, stand-alone DVDs. 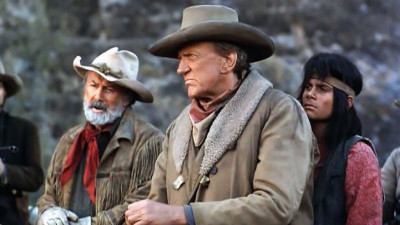 Return to Dodge plays very much like an extended episode from Gunsmoke's later seasons. Unlike those that followed, this was made by original series producer John Mantley, was written by one of the TV series' best writers, Jim Byrnes, and directed by frequent helmer Vincent McEveety. In addition to Arness reprising his role of (now retired Marshal) Matt Dillon, also returning are Amanda Blake as Miss Kitty Russell, Buck Taylor as Newly O'Brien, and Fran Ryan (who replaced Blake in the final season) as Hannah, current owner of the Long Branch Saloon. Steve Forrest, who memorably played the title heavy in a 1969 episode called "Mannon," also returns as the central villain, essentially becoming Gunsmoke's wrathish Khan.

Sadly, beloved actor Milburn Stone, who played Doc Adams, had died in 1980, while Ken Curtis, Festus Haggen beginning in a 1962 episode and a regular from 1964 onward, turned the project down. Partly Curtis was unhappy about the money being offered, but apparently also because the script gave him little to do. In the final show actor Mickey Jones plays a character that almost certainly was originally written for Curtis's Festus, and only appears in two brief scenes.

The story has Matt improbably living as a mountain man/fur trapper, improbable partly because the show presumably would be set around the 1890s or so, well after that phenomenon had ended, and also because Matt seems to living not many miles upriver from Dodge, in an expansive, mountainous region quite unlike anything in that state. (The film was shot in Alberta, Canada.) Nevertheless, retired Matt runs afoul of several outlaws almost simultaneously, including wily one-eyed Digger McCloud (W. Morgan Sheppard) and his gang, with Matt getting stabbed but escaping in a canoe.

After being rescued by Oakum (Jones, in the Festus part) and taken to Doc Adams's second-floor clinic, Matt is reunited with his longtime (almost-) love, Miss Kitty Russell (Blake), who nurses Matt back to health. (No doctor is seen, nor is Doc Adams mentioned.)

Arness was anxious to make Return to Dodge. The original series was cancelled unexpectedly and without warning, precluding a "final" episode, and a TV film that sort of wrapped things up appealed to the actor. He was 64 years old when it was made, and like real-life brother Peter Graves, Arness's features evolved into something that, quoting the trailer of John Wayne's Chisum were definitely "weary, saddle-worn." Further, Arness suffered a devastating leg wound during the Battle of Anzio that plagued him with chronic pain even during Gunsmoke's salad days. In Return to Dodge he rarely walks more than a few steps without being doubled, though the clever editing hides this well.

Nevertheless, Arness's strong performance holds this and the subsequent Gunsmoke movies together. His face may be as wrinkled as the shrunken head-apples I used to make as a kid, but there's no doubt at all this is the same fresh-faced Matt Dillon from the earliest Gunsmoke episodes, and all through the run of that series. Likewise, Amanda Blake, only in her late-fifties but looking older due to heavy smoking and cancer surgery, is unquestionably the same strong-willed, unshakingly loyal Miss Kitty, unhesitatingly rushing back to Dodge to be at Matt's side. I'd forgotten how prominent Blake was in Return to Dodge; all her scenes, with and without Arness, are excellent. Sadly, she died of AIDS-related illnesses less than two years later.

The film does a good job recreating the familiar Dodge City sets (the Long Branch Saloon, the area around Doc Adams's old office, etc.) and it's a pleasure to see other old characters from the show. Flashbacks to the 1969 "Mannon" are integrated well, allowing for clips featuring Milburn Stone, Glenn Strange (as Sam the bartender), and others. Forrest makes a formidable villain, though Holliman's character feels a bit tacked on and almost unnecessary.

Amanda Blake's untimely 1989 passing precluded any further development of the Matt-Kitty relationship, and so for the second TV-film, Gunsmoke: The Last Apache (1990), Earl W. Wallace's teleplay rekindles Matt's other great romance, with "Mike" Yardner (Michael Learned), from a famous (if improbable) 1973 episode in which an amnesiac Matt, unaware of his Dodge City life, falls in love. No other Gunsmoke characters are brought back, and Matt never even visits Dodge.

The narrative, however, is stronger in its linearity than Return to Dodge, and in some respects much more satisfying. The episode opens strongly, with Matt visiting a trading post whose owner has been murdered by gunmen. After gunning down those murderers, Matt finds a letter from Mike, asking to see him. However, he arrives just after renegade half-breed Apache Wolf (Joe Lara) has raided her cattle ranch. The lone survivor, Mike pleads with Matt to rescue her kidnapped daughter, Beth (Amy Stoch), revealing that she's Matt's daughter, too.

Joining them is old-timer Chalk Brighton (Richard Kiley), long in love with Mike himself, but an invaluable companion for Matt as he's quick with his gun and speaks the Apache language. At first Matt seeks help from the U.S. Cavalry, but Gen. Nelson Miles (Hugh O'Brian) has no interest in helping Matt, nor the Native Americans left in his charge. Indeed, he plans to hang two grandsons of Geronimo (Joaquin Martinez), so Matt breaks them out of jail, hoping to trade them for Beth, despite Wolf's determination to make Beth his wife.

The performances of Arness, Learned, and especially Kiley and Geoffrey Lewis (as an unscrupulous Indian bounty hunter) raise this Gunsmoke entry well above the usual TV-movie. The writing is sensitive to Native American issues, and the locations (Texas this time) are attractive.

Gunsmoke: To the Last Man is the least interesting of the three titles, though not bad. The story opens with Mike Yardner dead, having succumbed to fever, leaving Matt to care for her ranch and grown daughter, Beth (Amy Stoch once again). When a hundred head of cattle is rustled, Matt and Beth are drawn into a bloody range war, Earl W. Wallace's teleplay incorporating aspects of the real-life Pleasant Valley War between the Graham and Tewksbury families during 1882-92.

Pat Hingle, who briefly substituted for Milburn Stone on the series when the latter had open-heart surgery, turns up here as Col. Tucker, leader of a group of KKK-like vigilantes, while Morgan Woodward, the late, great character actor who turned up a lot on the TV show, always memorably and usually as some kind of psychopath, here plays an aging sheriff, Abel Rose, an old friend of Matt's. Woodward's scenes with Arness are the highlight of this entry.

Filmed in and around Old Tucson, Arizona, To the Last Man benefits from its better than average cast of veteran and emerging players, including Joseph Bottoms, Mills Watson, Jim Beaver (amusing as a bemused deputy), Ken Swofford and others.

Gunsmoke: Movie Collection is nothing more than a repackaging of DVDs originally released back in 2004, the discs themselves sporting identical screen menus and transfers. Shot in 35mm for 4:3 projection, the transfers are adequate but are due for remastering. The Dolby Digital Stereo is impressive for late-1980s/early-‘90s television, and the shows have optional Spanish tracks and closed captioning. Region 1 encoded.

One extremely odd note: all three bear MPAA ratings. Return to Dodge and To the Last Man are both rated "R" while The Last Apache gets a "PG-13." These are clearly the network versions of these shows, meaning they aired in primetime with, one presumes, no cuts, and the violence is so mild by today's standards they could be rerun in the middle of the afternoon without anyone noticing or caring, so what gives?

With John Wayne dead, and actors like Clint Eastwood and Charles Bronson rarely returning to the genre by this point, the Gunsmoke TV movies offered viewers a welcome revisit with another genre icon, older and certainly wrinklier, but the grit remains, and for fans these are a lot of fun. Recommended.