Kino // Unrated // September 22, 2020
List Price: $24.95 [Buy now and save at Amazon]
Review by Stuart Galbraith IV | posted October 13, 2020 | E-mail the Author
This is an odd one. One of star James Cagney's last films before retiring, Never Steal Anything Small (1959) is sort of like On the Waterfront reimagined as a toe-tapping musical comedy in brilliant Technicolor, or maybe Guys and Dolls modernized to revolve around a Jimmy Hoffa-type racketeer. Odder still is that it came from Universal-International, at the time known for its glossy melodramas, noir and crime films, Westerns, and sci-fi/horror product -- just about anything but musicals. As a musical it's also unusual: there are only five songs, of which only three are really full-fledged numbers, and the movie runs just 94 minutes, quite short for an A-list 1950s Hollywood musical. Indeed, some of the key plot points are so rushed as to be rendered unbelievable. Hollywood trade papers reported that the film was tinkered with for as long as a year after it was shot, so maybe the studio realized they had a dog long before it was released. rn

rnNonetheless, despite its weak story, Cagney, one of the screen's great actors, is fun to watch in what turned out to be his last musical ever. Filmed in CinemaScope, the cinematography by Harold Lipstein and an uncredited William Daniels, is eye-popping, with super-saturated primary colors (there must have been a sale on magenta lighting gels; many sets are ablaze with that color). The cast is mostly good and there's one outstanding musical number that deserves to be better-remembered.rn 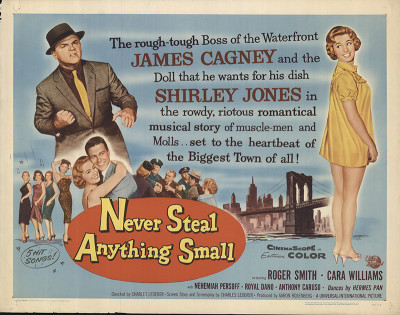 rnIn New York City, racketeer Jake MacIlaney (Cagney) extorts 10Gs from hypochondriac Charlie "Sleepout" Barnes (Jack Albertson), funds Jake uses to become president of the local chapter of his longshoremen's union. Arrested soon after, Jake is defended in court by neophyte attorney Dan Cabot (Roger Smith of 77 Sunset Strip), whom Jake decides to hire as his permanent mouthpiece partly due to the pending trial with Barnes, but also because Jake is attracted to Dan's pretty but disapproving young wife, Linda (Shirley Jones, in her fourth movie appearance). She wants her new husband to have no part in Jake's dodgy legal affairs, but Jake easily persuades Dan to work for him by bribing him with a lavish office complete with voluptuous "secretary," Winnipeg Simmons (Cara Williams). She seduces Dan within hours of their first meeting, an outraged Linda catching them necking his first day on the job. She decides to divorce Dan, clearing Jake's path to win Linda for himself. Meantime, Jake resolves to take on current union president Pinelli (Nehemiah Persoff). rn

rnNever Steal Anything Small was adapted from an unproduced play written by, of all people, Maxwell Anderson and Rouben Momoulian. (The film also credits Anderson with the songs' lyrics.) The movie never builds up much steam and none of the main characters are particularly likeable. Cagney's Jake is supposed to be a good-bad guy who, we're told, has never personally profited from all his criminal activities (hardly believable), which are technically illegal but essentially harmless: no one is bumped off, despite mild threats of violence. The basic ludicrousness of this highlighted in one sequence, where Jake personally dons scuba gear to recover a crateload of stolen watches he has dumped in the Hudson and plans to sell on the black market. The sight of short, stocky, and well-past-middle-age Cagney underwater is probably something moviegoers weren't expecting. The movie is a tiny bit clever in the way it gets around Production Code restrictions, particularly at the very end. rn

rnShirley Jones and Roger Smith don't make much of an impression. She was coming off two huge musicals, Oklahoma! (1955) and Carousel (1956), as well as the less-remembered but still popular April Love (1957). In Never Steal Anything Small, however, she sings two minor, forgettable songs, the latter a kind of spoof of television commercials, done too extravagantly to be believable. Common to 1950s Hollywood films, in which aging leading men played opposite much younger women, she's wooed by a much older man, 25 years in the movie, 35 in reality, lending some scenes a mildly unseemly air. Smith's Dan, meanwhile, comes off as hopelessly naïve and foolish, though Cara Williams's spirited performance, like Cagney's, compensates some. rn

rnBy far the film's best sequence has Jake trying to bribe Winnipeg into seducing Dan by offering to buy her the car of her choice at a foreign automobile dealership. A musical number ensues, with her insisting upon the most expensive one there, a $14,000 Ferrari, while he tries talking her down to other, cheaper models. A dozen or so classic foreign cars, all in showroom condition, would make any aficionado salivate, and marvel at their ludicrously low 1958 price tags. More importantly, the number is well-staged, beautifully shot, and both Cagney and Williams are in top form. Too the bad the whole movie isn't this good. rn

rnApparently Never Steal Anything Small was never released to DVD, making Kino's new Blu-ray, licensed from Universal, is a real treat. Filmed in CinemaScope, the 2.35:1 image shows some wear here and there, particularly during dissolves, but mostly looks stupendous, with an impressively sharp image and, more significantly, eye-popping color. The film may have had Perspecta Stereophonic Sound encoding, but the release is DTS-HD Master Audio mono and it's reasonably impressive for what it is. Optional English subtitles provided on this Region "A" encoded disc. rn

rnSupplements are limited to a trailer and a new audio commentary track by critic/filmmaker Daniel Kremer and critic Lee Gambin. rn

rnExcept for the "I'm Sorry, I Want a Ferrari" number, Never Steal Anything Small is a misfire, though for Cagney, Jones, and the great cinematography, it's definitely worth seeing once. Recommended. rn