Curse of the Undead

Kino // Unrated // October 6, 2020
List Price: $24.95 [Buy now and save at Amazon]
Review by Stuart Galbraith IV | posted October 28, 2020 | E-mail the Author
As Tom Weaver points out in his delightful audio commentary track of Curse of the Undead (1959), Universal-International went through three distinct phases during the 1950s with regards to its sci-fi and horror films. The early ones like It Came from Outer Space (1953) and Creature from the Black Lagoon (1954) were ambitious and original, but then genre producer William Alland noticed that Columbia's sci-fi output, making the same amount of money with their own films, cut corners padding their product scads of stock footage. U-I followed suit, in later films like the terrible The Deadly Mantis (1957). After that, Universal petered out with feeble efforts like Curse of the Undead and The Leech Woman (1960), movies made primarily to support double-bills, often with far better-made (yet no more expensive) imports, frequently from Britain's Hammer Films.

Despite this writer's fondness, to say nothing of tolerance, for even Universal's weaker efforts, Curse of the Undead is nonetheless a contender for the studio's all-time worst horror and/or sci-fi picture. It combines supernatural horror with the Western genre, but the results are terrible as a horror film and equally terrible as a Western. It's cheap, even shoddy, directed with no imagination, and somewhat miscast, ultimately with nothing to recommend it all.

However, Kino's good transfer, provided by Universal, helps a bit, though the real saving grace is Weaver's very entertaining and informative audio commentary. It's so good you'll want to suffer through the movie just to be able to go back and listen to him. 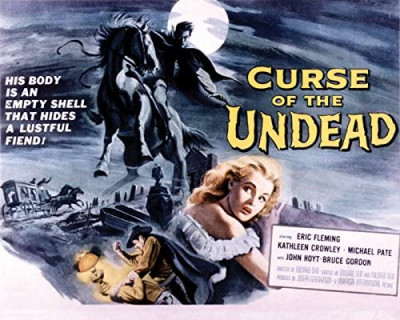 Dolores (Kathleen Crowley) accompanies her country doctor father, John Carter (John Hoyt), he helpless to prevent the death of the latest in a series of victim of some unexplained illness sweeping through their small Old West town. Cora (Nancy Kilgas) succumbs like all the others. It's obvious to the audience but not the characters onscreen that she's the victim of a vampire, complete with bite wounds on her neck, but Carter and local preacher Dan Young (Eric Fleming) are baffled.

Meanwhile, Carter's adult son, Tim (Jimmy Murphy) blames Buffer (Bruce Gordon) for damming a stream on Carter property, and later implies he's been rustling their cattle, too. The local sheriff (Edward Binns), however, is no Matt Dillon, though Buffer claims he's innocent. Elsewhere, Doc Carter turns up dead, another victim of the vampire, though this contradicts the story's premise that the fiend only attacks young women. In any case, Tim stupidly blames Buffer and the latter kills him in self-defense.

Nevertheless, Dolores decides to hire a gunfighter to kill Buffer, and a clad-in-black stranger, calling himself Drake Robey (Australian Michael Pate) accepts the job, mainly because he desires Dolores. To no one's surprise, Robey is the vampire (though he looks more like Richard Boone's Paladin), determined to make Dolores his undead bride. Or something.

Director Edward Dein and his screenwriter wife, Mildred, conceived of Curse of the Undead as a lark, perhaps initially figuring no one in their right mind would give serious thought into producing it. But, sigh, produce it they did. The film looks incredibly cheap even by late U-I standards. The 79-minute film was shot in 18 days, and even that seems leisurely given the results onscreen. Made during the peak of TV Westerns, shows like Gunsmoke and Have Gun - Will Travel were capable of much more visual flair and better production values that this, and on shorter schedules.

B-Westerns from the silent era forward on rare occasions told yarns concerning alleged ghosts and other supernatural happenings, but these always turned out to be a ruse of the "brain heavy" to scare off lawmen. Curse of the Undead offers a bona fide vampire, but the Deins show no imagination at all introducing such a character into the Old West. An episode of Twilight Zone airing not long after, the wonderfully eerie "The Grave," demonstrated that it was possible to combine the Western and horror genres effectively, but Curse of the Undead, for the most part, plays like an ordinary TV Western.

The fact that Robey is a vampire adds surprisingly little to the plot. He explains to Dolores that he can't stand bright light, but other scenes, including the climax, take place in broad daylight with Robey seemingly unaffected. Perhaps what's most shocking about Curse of the Undead is that the year before Universal released Hammer's game-changing Horror of Dracula (supported by another U-I stinker, The Thing That Couldn't Die). That was a huge hit, prompting a long-term deal between Universal and Hammer, yet the makers of Curse of the Undead clearly learned nothing from that success. If they had simply watched Hammer's film and had taken notes, myriad concepts might easily have been adapted to Curse's Old West setting.

Craggy Michael Pate was an interesting actor, but he hasn't got a chance against the flat, uninteresting direction that can't even present him as an intimidating killer-for-hire, much less the unstoppable undead.

At various times, the picture borders on incompetent. In one early scene, the sheriff confronts Tim at the local saloon. Tim, upset, breaks a few glasses, including his own mug of beer. However, the prop department apparently used the wrong type of candy glass, or something, because even before Tim breaks it the beer leaks through the glass, spilling water everywhere. When Edward Binns's sheriff nestles up to the bar, between lines one can see that he's just itching to clean the soppy mess up.

Licensed to Kino by Universal, the black-and-white, 1.85:1 widescreen image is good throughout, though the cinematography is mostly bland. The English DTS-HD (mono) audio is impressive for what it is, and optional English subtitles are provided on this Region "A" encoded disc.

As noted above, Tom Weaver's audio commentary track, amusing as it is informative, is really the only reason to buy this. Indeed, any randomly-chosen five-minute chunk of the track is more interesting than anything in the film, egregiously overlong at 79 minutes. A trailer rounds out the extras.

Famed artist Reynold Brown designed the poster, which is far more atmospheric than anything in the movie. It's a stinker of the first order, but Tom Weaver's commentary track bumps what would have been a "Skip" into "Recommended" territory, if for genre fans only.