Jesus Shows You the Way to the Highway (Ltd. Ed., includes Crumbs) 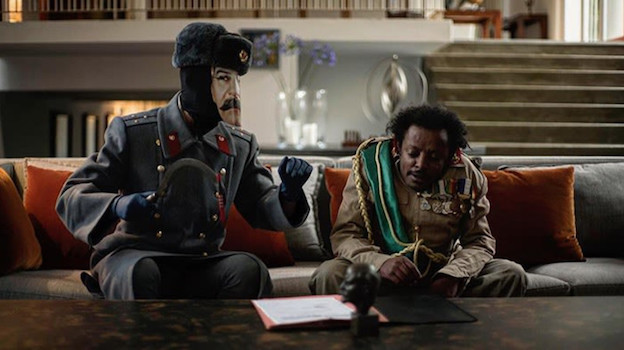 Jesus Shows You the Way to the Highway, the second feature from Spanish-born filmmaker Miguel Llansó, makes its cult-movie ambitions apparent the moment you get done reading its sentence-length title. With a convoluted head-trip narrative and a clear fondness for schlock cinema, Jesus Shows You... is a globetrotting, genre-hopping whatzit tailor-made for viewers whose tastes skew a bit gonzo. Arrow Video's limited-edition initial Blu-ray release for the film includes a second disc featuring Llansó's more studied but equally pop-culture-inflected first feature, Crumbs.

It's easier to name-check the subgenres being referenced in Jesus Shows You... than it is to properly untangle its knotty storyline, so indulge me while I attempt to do a little of both. The basic set-up is this: It's 2035. CIA agents D.T. Gagano (Daniel Tadesse) and Palmer Eldritch (Agustín Mateo) are sent into a government-run virtual reality program called Psychobook that is being threatened by a virus called Soviet Union. In the world of Psychobook, everything appears in stop-motion (think Peter Gabriel's "Sledgehammer" video) with characters wearing flat paper masks over their faces. The virtual representation of the Soviet Union virus is a man wearing a Stalin paper mask and wielding a hammer and sickle.

In a development suggesting an Afrofuturist slant on a Philip K. Dick story, Gagano ends up stuck in Psychobook, where the Soviet Union duplicates his imprisoned avatar and sends that double to "Beta Ethiopia." Beta Ethiopia is ruled by a coke-addled dictator named Batfro, who is played in different scenes by different actors, all wearing an Adam West-style Batman costume and acting like they are in a Mexican Lucha Libre film.

To echo its story of offbeat espionage, the film cribs its main look from '60s European spy flicks, although the filmmakers' low budget produces something closer to the Beastie Boys' tongue-in-cheek take on Danger: Diabolik than the vintage real deal.

Kung fu flicks are also paid tribute, thanks to a trio of martial artists in Batfro's organization named Spaghetti, Ravioli, and... Baltazar? Their fight scene with a Shaolin monk to secure "the Ark of the Covenant" is accompanied by round announcements and sound effects meant to evoke the Street Fighter video games.

Japanese monster flicks are given a brief nod too, in a sequence where human-sized houseflies appear, shooting what appear to be laser balls out of their eyes.

Llansó subverts genre expectations just as often as he pays them tribute.Everyone in the film has their dialogue dubbed in English, often with regionally inappropriate accents. Rather than a suave James Bond knockoff, his leading man, Daniel Tadesse, is a dwarf with a hunch back. The leading lady, Gerda-Annette Allikas, resembles a big-boned Viking who towers over Tadesse. Their characters' lifelong dreams are to run a pizzeria and a kickboxing academy respectively.

Non-genre fans are sure to be left cold by Jesus Shows You...'s peculiar brand of postmodern exploitation, but to the audience tuned in to Llansó's trashy-arty wavelength, this is a cult-film crowd pleaser. 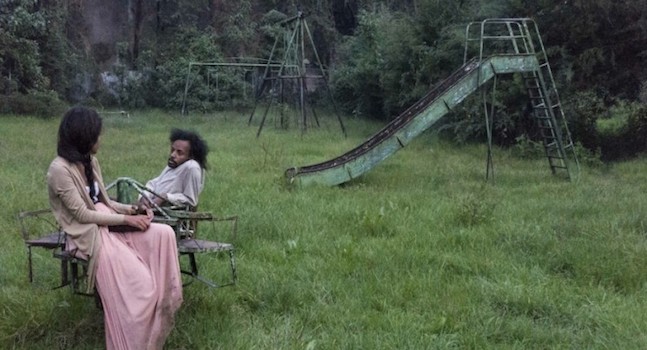 Llansó's first feature from 2015, Crumbs, is tonally quite different from Jesus Shows You.... Set in a post-apocalyptic Ethiopia, Daniel Tadesse stars as a scavenger who seeks to find out his personal connection to a spacecraft that has been hovering in the sky for decades. His girlfriend Birdy (Selam Tesfayie) lives in a long-abandoned bowling alley that has started working again on its own, and she thinks it might be the result of someone in that floating ship. Along his quest, Tadesse's character collects (and loses) pop culture detritus for bartering, like a Teenage Mutant Ninja Turtle action figure, a plastic light-up sword, and a vinyl copy of Michael Jackson's Dangerous album.

Llansó and cinematographer Israel Seoane create a surprisingly stately film whose deadpan jokes are more unexpected than the blatantly wacky Jesus Shows You.... The contemplative pace can make the 70-minute film sometimes play like a short with extra padding, but the overall effect is enchanting and unique. 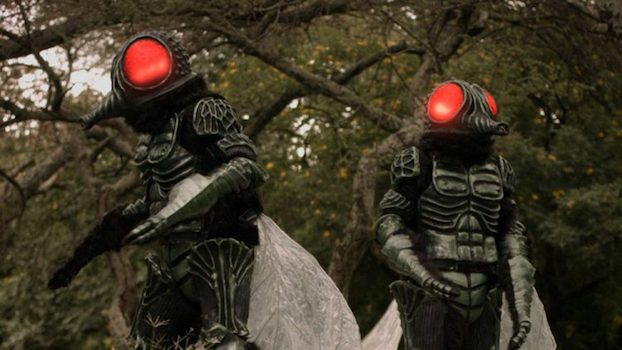 The Blu-ray
The 2-disc edition of Jesus Shows You the Way to the Highway is limited to 2000 copies. It includes a slipcase, reversible cover art, a double-sided fold-out poster, and a booklet featuring writing by Barry Forshaw and Anton Bitel.

The Video:
Jesus Shows You... has an AVC-encoded 1080p 1.85:1 presentation, although certain sections are presented in pillar-boxed 1.33:1. Different scenes were shot on digital formats or 16mm film. Some of the 16mm shows some minor fluctuations and flaws, but it presumably has not been fixed or altered for the sake of leaning into the specific throwback look created by the celluloid. The overall presentation makes sense, even with the technical rough edges.

Crumbs has an AVC-encoded 1080p 2.39:1 presentation that is all natively digital and has crisp and clean look. Colors are slightly desaturated to enhance the post-apocalyptic ambience.

- Two Australian film critics talk about the work of Miguel Llansó and this film in particular (obviously). They dissect the work both with academic rigor and the enthusiasm of fans.

Final Thoughts:
Jesus Shows You the Way to the Highway makes me wish movie theaters were doing midnight shows right now. This is the perfect kind of cult film to see with a crowd. It's a bonkers genre pastiche that seems like someone rummaged through the backroom of a VHS rental store and spliced a dozen different tapes together. It has a joyful outsider perspective that embraces the sloppy, the strange, and... yeah... the stupid. Highly Recommended. 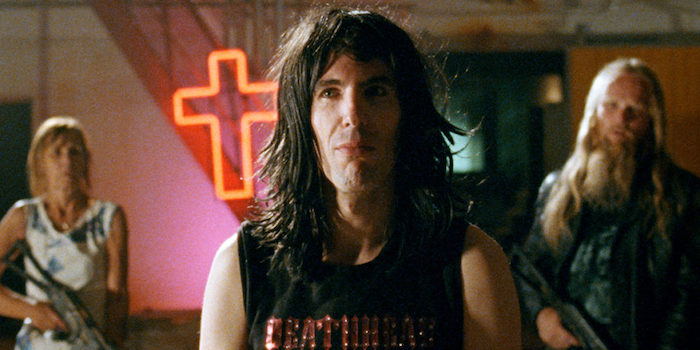