Kino // R // November 10, 2020
List Price: $29.95 [Buy now and save at Amazon]
Review by Stuart Galbraith IV | posted November 19, 2020 | E-mail the Author
A hit-and-(mostly)-miss comedy anthology that works best when spoofing old movies, Amazon Women on the Moon (1987) somewhat emulates the less-slick but much funnier The Kentucky Fried Movie (1977), made independently by producer Robert K. Weiss and director John Landis. Both have a hand in Amazon Women, but instead of Kentucky's writers - David Zucker, Jim Abrahams, and Jerry Zucker, the "ZAZ" team later responsible for Airplane! and Police Squad!/The Naked Gun - this film was written by the team of Michael Barrie and Jim Mulholland. Primarily associated with Johnny Carson and, later, David Letterman, their vignettes are sometimes clever, sometimes excruciating.

Five directors are credited for the 20 segments, strung together without much glue to hold it together. Besides Landis and Weiss, the others are Joe Dante, writer Carl Gottlieb, and actor Peter Horton. They seem less responsible for the schizophrenic quality of the film than the writers, as each director's segments also vary greatly. For instance, Dante's "Reckless Youth," curiously positioned after the end titles (How many in the audience left before it even began?) is the best in the film but, conversely, his "Roast Your Loved One" segment is, arguably in a wide field, the worst. And even when it works Amazon Women on the Moon is more clever than laugh-out-loud funny. 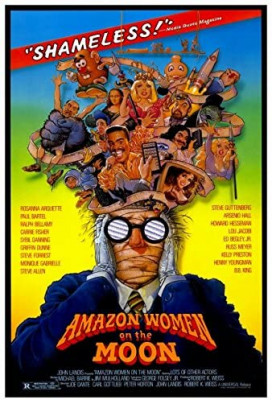 What the movie audience sees, more or less, is supposed to be the late-night programming of fiction TV station WIDB (channel 8), though the film doesn't adhere to this premise as rigidly as the (also much funnier) SCTV did for many years previously. Amazon Women on the Moon is the Late Movie, a dead-on spoof of cheap ‘50s sci-fi films, mostly emulating Cat-Women of the Moon (1953) and Queen of Outer Space (1958), though the genre's clichés reference even good movies like Robinson Crusoe on Mars (1964). The costumes, characters, art direction, etc. of this and the film's other spoofs are impressively accurate, but unlike the hilarious Bruce Lee parody in Kentucky Fried Movie the narrow focus of the humor is in merely recreating everything, rather than affectionately playing with the genre's tropes.

"Reckless Youth" is funnier because, in addition to recreating the look of exploitation films of the ‘30s and ‘40s, with Carrie Fisher the innocent victim of a "social disease," Dante and his game cast (which includes Paul Bartel, Herb Vigran, and Mike Mazurki) subtly capture the slightly cockeyed filmmaking style of those ultra-cheap pictures: Dante's camera angles and editing are just a wee bit off, and the acting is sincere but hilariously "unstudied."

A couple of the segments work not so much because the writing or direction are good, but rather because the featured performers approach the material with just the right degree of silliness. This is especially true of "Blacks Without Soul," not a particularly funny concept made delightful by David Alan Grier's committed portrait of a lily white-bread singer of easy listening standards; by William Marshall as the Captain of a band of "Video Pirates" who gleefully flaunt FBI warnings about copying video cassettes; and by Ed Begley Jr. in "Son of the Invisible Man," a meticulous recreation of James Whale's 1933 original Invisible Man, only Begley's Griffin is anything but transparent. Running amok in a pub, naked but thinking he's invisible, Begley captures Claude Rains's original giddiness but in a whole new light.

Other segments might have seemed promising on paper but prove profoundly unfunny in their final form. "Hospital," about an evasive, loony doctor (Griffin Dunne) alarming anxious parents of a newborn (Michelle Pfeiffer [!] and Peter Horton, the segment's director) is as dreadful as Saturday Night Live and its nadir, while "Roast Your Loved One," with a funeral service unfolding like a Dean Martin Celebrity Roast, is a one-joke concept stretched to interminable length. (And, apparently, it was cut way down.) Other bits, often parodies of television commercials like "Silly Pâté," and "Hairlooming," just kind of sit there, while others are sophomoric nods to ‘80s teen hot-bloodedness. Some, like "Hospital" and "Two I.D.s," with Rosanna Arquette using credit check-like technology to screen her blind date (Steve Guttenberg), don't seem aligned with the film's central conceit.

Of the original, non-spoof segments, I liked "Titan Man" best, with Matt Adler playing George, a young teen ready to go "all the way" with girlfriend Kelly Preston, if only he can get his hands on some condoms. At the local drug store, he sheepishly tries to buy some from grandfatherly pharmacist Mr. Gower (Ralph Bellamy) but things go horribly wrong in a hilarious and unexpected way.

Watching it again after many decades, I was struck by the fact that so much of the material would be lost on younger audiences in the same way early 1930s pop culture references in Marx Bros. movies went over the heads of 1970s teenagers. The "Video Pirates" is one obvious example, the treasure the pirates find being loaded to the gills with bulky VHS, Betamax, and even Laserdiscs and players.

I don't recall Amazon Women on the Moon getting anything like a wide release (it earned a paltry $550,000 in theaters) so the original film elements look brand-new. The English DTS-HD (mono) audio is also above average. Optional English subtitles are provided on this Region "A" encoded disc.

Kino packed this title with supplements old and new. The new extras include a new featurette with on-camera interview with Landis, Dante, co-editor Marshall Harvey, casting director Julie Seltzer and others; and an audio commentary track by film historians Kat Ellinger and Mike McPadden. Additional supplements include outtakes and dallies from Dante's personal archive; his "Reckless Youth" segment presented in 1.37:1 standard format, as originally intended; deleted scenes and outtakes (lots), and a trailer.

For old movie buffs and ‘80s nostalgists, Amazon Women on the Moon definitely has its moments, though also long stretches of dreariness. The disc looks great, however, and the supplements are way above average. Recommended.