Kino // Unrated // October 13, 2020
List Price: $29.95 [Buy now and save at Amazon]
Review by Stuart Galbraith IV | posted November 18, 2020 | E-mail the Author
The seventh volume in Kino's Forbidden Fruit: The Golden Age of the Exploitation Picture, this latest double-bill, Test Tube Babies (1948) and Guilty Parents (1934) offers films alike in some respects but stylistically starkly different. Test Tube Babies was made by producer George Weiss, the same fellow who backed Ed Wood's notorious Glen or Glenda? (1953), Phil "Robot Monster" Tucker's Dance Hall Racket (1953) and other no-budget wonders, while Guilty Parents is far more polished. Though undoubtedly ultra-cheap, the production values of that earlier film are about on-par with semi-reputable "Poverty Row" films from that same era. In other words, Guilty Parents looks like a real movie, albeit an extremely low-budget one, while Test Tube Babies displays an awkward, rudimentary quality not far removed from the cross-eyed masterpieces of Ed Wood.

Neither is good, but each is a kind of fascinating artifact, featuring as they do taboo subject matter unthinkable in mainstream Hollywood movies from July 1934 until the late 1960s. Prior to that, of course, "pre-Code" Hollywood movies from major studios included all kinds of material verboten after the Production Code was amended: nudity, graphic violence, racier sex scenes, homosexuality, and so forth. By the early 1950s much less prudish movies from Europe began to trickle into art house-type venues, but for the hix in the stix who nixed hix pix, these exploitation films were the only practical way to see this kind of stuff on the big screen. 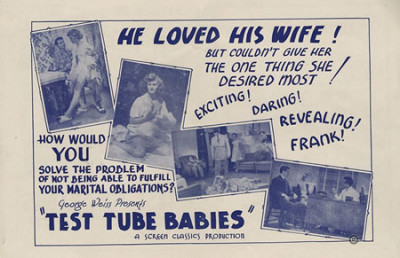 In Test Tube Babies, Cathy (Dorothy Duke) and George (William Thomason) are a newly married couple, she anxious to start a family, but he's both a workaholic and a stick-in-the-mud, preferring quiet domesticity. Bored, she throws a party that soon spirals out of control, with drunken sex and even a catfight among two of the women, one stripped in the melee. Contrite, she makes up with hubby and they try and start a family in earnest, but no luck.

Concerned, Cathy and George decide to visit a specialist (Ed Wood regular Timothy Farrell) who, after a series of tests, gives George the bad news that he has bum sperm. Disheartened, Cathy has no interest in adopting a child, and a childless future seems certain. Ah, but wait! The good doctor informs them about a centuries-old but scientifically-advanced process called artificial insemination.

Crude though it is, Test Tube Babies plays like a gen-u-wine public service film…with a little sex. The long party scene is pretty amusing, and fascinating as a document, admittedly crudely dramatized, a wild party circa the late-1940s. Some guests become sloppy drunks and fall asleep, others slip into the bedroom for a quickie with a stranger and, most amusing of all, a pretentious "actress" is revealed as a burlesque dancer prompting that blouse-ripping catfight.

The staging and the acting straddle the worlds of professional filmmaking and amateurishness. The two leads aren't bad; one can only wonder whether they thought a movie called Test Tube Babies would be a first step toward Hollywood stardom. Others, like the two dames on the floor (who seem to be enjoying themselves, giving the scene perhaps unintended lesbian overtones) are clearly not actors at all, seemingly plucked off the streets.

Guilty Parents actually predates by several months the enforcement of the Production Code, and really isn't any racier than the kind of thing the big studios were getting away with. The movie, however, is actually pretty good for such a cheap picture. It plays almost like an ultra-cheap, pre-Code Warner Bros. melodrama.

Jean Lacy stars as Helen Mason, on trial for murder. The defense attorney (John St. Polis) puts forth an unusual strategy, blaming Helen's mother (Isabel La Mal) for her daughter's waywardness, the mother being a strict, puritanical women who failed to teach Helen about the birds and the bees. (Even more radically, she casually tosses a book Helen had borrowed from the library into the fireplace.)

Rebelling, Helen begins a roller-coaster ride of sin, becoming pregnant with her boyfriend who, dead broke, tries robbing a gas station only to be fatally shot. He takes up dancing, but is drawn into a world of Jeffrey Epstein/Ghislaine Maxwell procurement for the rich and powerful, Helen eventually blackmailed into steering innocent virgins into their midst.

Though its eventful story has its share of salaciousness and violence, the only really "dirty" scene is actually quite tame, with Helen stripping at a party behind a sheet, leaving only her silhouette visible. Your average pre-Code Warner Bros. musical showed more flesh. And speaking of Warners, Guilty Parents really is like a low-budget, out-of-kilter Warner melodrama in the 3 on a Match vein, with a similar ending even.

From the late Mike Vraney's Something Weird catalog, both movies look quite good considering their low budgets, spotty distribution, and questionable storage through the decades. Test Tube Babies has some significant warping and jittering here and there, and Guilty Parents doesn't look great but it's certainly watchable. The English DTS-HD (mono) audio is adequate. Optional English subtitles are provided on this Region "A" encoded disc.

Supplements include an audio commentary by genre historian Eric Schaefer; Sex and Romance (1951), a marital education films, and theatrical trailers.

I was expecting one or both films to be fairly grueling to sit through, but instead I found each thoroughly entertaining and fascinating as pop culture artifacts. Highly Recommended.