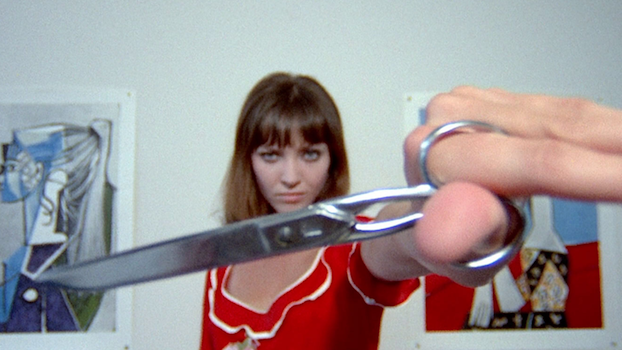 Pierrot le fou (1965) makes its long-awaited return to The Criterion Collection, after the original Blu-ray went out of print. The film, directed by Jean-Luc Godard and starring Jean-Paul Belmondo and Anna Karina, has become iconic. It's a couple-on-the-run love story that thumbs its nose at narrative and genre conventions. It's a potentially intimidating pop-art freakout full of puzzling elisions, surreal sidetracks, and Brechtian alienation that nonetheless alienates far fewer viewers than the more directly political films Godard was about to make.

Belmondo is Ferdinand, a middle-class husband who is drowning in ennui. In one of the film's most referenced sequences, Ferdinand attends a cocktail party where the guests spout nothing but ad copy. (Even an appearance by Hollywood iconoclast Samuel Fuller can't raise Ferdinand's spirits.)

Enter Marianne Renoir (Karina). She is an old lover who has since gotten involved with gunrunners. Her very presence promises excitement and intrigue. Ferdinand decides to leave his wife and children to join up with Marianne on a road trip to the French Riviera. (In one of Godard's signature moments of wordplay, a neon sign touting the Riviera is cropped to spell "vie," or "life." Of course, in Godard's cynical cinematic universe, the promise of a new/better/more fulfilling life can't help but feel like fool's gold.)

Godard is a professed fan of classic Hollywood cinema and pulp fiction novels, but his references feel less like familiar approaches to homage and more like footnotes at the bottom of a film studies thesis paper.* When Ferdinand's wife complains that he has let the babysitter go to the movies, he replies that she's seeing Johnny Guitar and it's good for her education.

Godard's reference-heavy approach can give viewers the sense that the film is going over their heads almost as swiftly as it unfolds. It's liberating, then, to hear frequent Godard collaborator Jean-Pierre Gorin admit in one of the Blu-ray's bonus features that the film's opening narration about the paintings of Velazquez goes in one ear and out the other for him. Rather than worry if you've done the proper homework, you can just... you know... watch the movie. Use your intuition. You'll be fine.

Pierrot is bright and colorful while being fatalistically downbeat, a kind of daylight noir. Even the nickname Marianne bestows on Ferdinand -- "Pierrot" -- brings to mind the stock character of the sad clown (while also mocking the idea of them being big-deal criminals, thanks to the ‘40s French gangster Pierrot le fou [or "Crazy Pete," as Wikipedia chooses to translate it]). A memorably genre-bending song-and-dance duet between Ferdinand and Marianne as they walk through the woods cheerfully underlines Marianne's belief that she is doomed. (Ferdinand would rather focus on her knockout figure.)

Knowing that Godard and Karina were on the verge of divorce during the making of the film, Pierrot le fou can't help but feel in some way like a delirious fever dream before the inevitable end. It's kind of cute that Godard would cast the more traditionally hunky Belmondo as a bookish intellect like himself, and equally a bit disappointing that Karina -- whose soulful performances helped define many of those early Godard efforts -- is a fairly flat, double-crossing femme fatale.

With a film that's built to frustrate narrative expectations, it's hard not to feel a little frustrated by Pierrot le fou. Looking at Godard's filmography, Pierrot le fou now plays like the tentative start of a transition from the self-aware narratives of his earliest work to the full-on deconstructions of cinema that would define the rest of his career. To my taste, I prefer Godard when he's safer or when he's more flagrant; the in-between is discomfiting.

That said, many of the moments and images from Pierrot are so bold that they have stayed more present in my mind than whole films I have liked better. Belmondo being lightly waterboarded to retrieve information. Cinematographer Raoul Coutard's elegant tracking shot that follows a bowling ball from Karina's hand, down the lane to the pins, and back again. Raymond Devos interrupting the climax of the film with a three-minute story about the love song that ruined his life.

Pierrot le fou is bold. It's a mess. It's a darn good film from a great filmmaker.

*It's fitting that Godard's most recent film, the essay-collage The Image Book, ends with a list of works cited.

The Blu-ray
Apart from a new cover and a slightly newer transfer (see below), this version of Pierrot le fou is a reconstruction of the out-of-print 2009 Criterion Blu-ray. It includes a 45-page booklet featuring writing by Richard Brody and Andrew Sarris, plus a vintage interview with Jean-Luc Godard.

The Video:
My last viewing of Pierrot le fou was back in the DVD days, so I have no comparison for the older Criterion BD. Consulting some of the screen grabs from DVD Beaver, it seems clear that this is the same master that StudioCanal licensed in Europe as early as 2010. Based on the grabs, the differences between the 2009 Criterion and this AVC-encoded 1080p 2.35:1 presentation are subtle. Color timing skews a little bluer overall. Certain shots look better to these eyes (a day-for-night shot that previously just looked like day), while the shot featuring Sam Fuller's cameo looks odd not tinted green -- as it has been in previous US video releases. Overall quality is good though. Maybe a touch noisy in places, but the film elements are crisp and well-restored.

The Audio:
The French LPCM mono audio (with optional English subtitles) sounds accurate to the idiosyncratic sound design of the film. Apart from some voice-over, all dialogue (and singing) was recorded with direct sound, so sometimes it gets muffled by other elements of the ambience (I'm thinking of a scene where characters shout over the motor of a boat, for example). Sometimes, Godard crowds the soundtrack with source music cues and Antoine Duhamel's score, intentionally letting different elements trample all over each other.

(HD upscale, 14:18) - A 2007 interview, in which she remembers the experience of shooting the film. She has mostly pleasant memories, although she says that working with Godard made working with all future directors a piece of cake. The actors would frequently party until the wee hours while in the South of France, and Godard would respond by giving them complicated action to do the next work day.

Final Thoughts:
Pierrot le fou is one of Jean-Luc Godard's most iconic films, merging pop and avant-garde sensibilities in a way that feels invitingly playful rather than strident. I can name a handful of "accessible" Godard films that I personally like better, but I can't deny that this film contains at least dozen sequences I've never forgotten. Criterion's revival of this out-of-print title comes Highly Recommended.