Kino // Unrated // November 24, 2020
List Price: $29.95 [Buy now and save at Amazon]
Review by Stuart Galbraith IV | posted December 1, 2020 | E-mail the Author
Another great Billy Wilder release on Blu-ray from Kino -- How many Wilder films does that make it thus far? Ten? -- The Lost Weekend (1945) is alternately described as a film noir drama and social problem film, revolving around a self-loathing (yet amiable and erudite), would-be writer (Ray Milland), whose alcoholism is taking over and gradually ruining his life. What doesn't sound much like a fun night out at the movies, in the hands of Wilder and co-writer Charles Brackett, is a completely engrossing story that in every scene rises high above the kind of TV-movies and After School specials one associates with such material.

The very end of the picture feels very slightly compromised to comply with the demands of the Production Code, but for the most part The Lost Weekend pulls few punches: it's harrowingly believable and hardly dated at all. 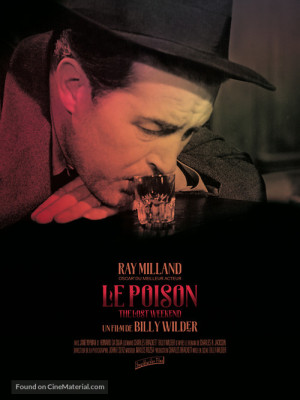 Outside a modest Manhattan apartment, a bottle of rye dangles from a rope tied to the windowsill. Inside the apartment struggling writer Don Birman (Milland) and his brother, Wick (Phillip Terry), are busy packing for a weekend getaway to the country. The unspoken tension is palpable, with Don clearly trying to maneuver unseen the bottle of rye into his suitcase, but the attempted ruse is discovered, the whisky poured down the drain. Don's girlfriend, Helen (Jane Wyman), drops by with two tickets for a concert that day. Don talks Wick and Helen into going to the concert together before catching the train. Wick and Helen are hesitant, concerned about Don's drinking problem, but Wick assures Helen that a) he's searched the apartment thoroughly for any additional bottles; and, b) Don hasn't any money to buy more.

However, Don discovers rent money Wick has hidden in the sugar bowl, and makes a beeline to the liquor store, buys two bottles of rye, and then heads to Nat's Bar for "a few drinks." (Though made in 1945 and set a few years before that, it's amazing to see how big a bender Don manages on just ten bucks.) Of course, Don misses their train, so he sneaks back into his flat for a weekend of boozy, endless drinking.

The script's clever structure allows for Don to explain to barkeep Nat (Howard Da Silva) in flashbacks the story of his decline, how he first became aware of his addiction at the opera, during La Traviata's Drinking Song. The Champagne flowing onstage reminds him of the pint of booze checked-in with his coat and hat, where he also meets Helen when their coats are accidentally switched with one another. Their attraction allows Don to quit drinking for a while, but he falls off the wagon when a meeting with Helen's parents is arranged. Long-suffering Wick tries to cover for his brother, but Don admits all to Helen. She, naively, thinks she can save him.

Prior to The Lost Weekend, alcoholism was in Hollywood movie mostly regarded as an amusing eccentricity, like the carefree booziness of Nick and Nora Charles in the Thin Man movies. While movies like the original A Star Is Born tried taking it seriously, actors like Jack Norton and Arthur Housman built entire careers out of playing comic drunks, and W.C. Fields, of course, became a huge star playing one.

The origins of The Lost Weekend are murky, but generally it's believed Wilder wanted through Don to explore his ultimately acrimonious relationship with writer Raymond Chandler during the scripting of Double Indemnity, while Brackett had close relationships with many of the great transplanted New York writers living in Hollywood during the ‘30s and ‘40s, many of whom were also alcoholics, as was Brackett's wife.

In Charles R. Jackson's 1944 novel of the same name, Don's alcoholism is driven by his closeted, repressed homosexuality, an angle obviously dropped because of Production Code restrictions, though in the movie Frank Faylen's alcoholic ward nurse, the cynical "Bim" Nolan, is a coded homosexual. Another significant supporting character, Gloria (the underrated Doris Dowling), is clearly a prostitute (and, offscreen, Wilder's mistress). In those scenes one can't help but admire just how much Wilder got away with.

As with most of Wilder's movies, visually the picture is rich and even artful, Wilder keeping this art largely invisible. And innovative, too. The Lost Weekend was among the first of a new wave of Hollywood productions partly shot on location in New York (and using hidden cameras), Wilder insisting Paramount's New York Street on the backlot was too phony. Likewise, the film's two main sets, Don and Wick's apartment, and Nat's bar, were made authentically cramped, drab and ordinary. Visually, the movie is constantly clever without drawing attention to itself: in Nat's tavern, the movie audience keeps count of Don's whisky shots by the growing number of wet rings the shot glasses leave on the bar. In another scene Wilder captures Don's dysphoria with an excruciatingly tight close-up of Milland's right eye.

Though increasingly uncomfortable with the production, Milland's brave performance is a wonder. Wilder briefly fought for Jose Ferrer to play Don, but in a rare moment of studio head wisdom, Buddy De Sylva argued that no one would care if Ferrer lived or died, but would invest themselves emotionally in a likeable star. Yet, in pulling few punches, over the course of Don's lost weekend, Milland grows increasingly disheveled and chalky-faced, Wilder's cameraman John F. Seitz photographing him with unflatteringly harsh light, or half losing him in darkness. Over the course of the weekend and beyond Milland's Don goes from troubled but reasonably secure he can self-manage his addiction; toward the end he's desperately out of control and quite pathetic.

Once completed the studio, already with misgivings, were alarmed by a disastrous preview: virtually everyone hated it; some even laughed. Wilder, disheartened, moved on to other projects but it soon became clear the reaction was due mainly to the inapt temporary music track that accompanied the preview, scoring at completely at odds with the story. Miklós Rózsa was hired, he orchestrating his much darker, even eerie score with a theremin, the same electronic instrument he used for Hitchcock's Spellbound. This and some minor tinkering (including with the ending) did the trick. The $1.25 million production eventually grossed $11 million, winning numerous awards, including Oscars for Best Picture, Best Director, Best Actor (Milland), and Best Adapted Screenplay. And, ironically, in the end, it faced minimal opposition from local censorship boards.

Remastered in 4K, Kino's release of the black-and-white, 1.37:1 standard screen The Lost Weekend looks splendid, with excellent detail and strong blacks, the latter essential to the look of the picture. The English DTS-HD (mono) audio is perfectly fine also. Optional English subtitles are provided on this Region "A" encoded disc.

Supplements include an insightful, very personal audio commentary by film historian Joseph McBride, full of astute observations about the production and Wilder generally. Also included is a radio adaptation, a Trailers from Hell segment, and a trailer for the film itself.

Anything but a cinematic sermon, The Lost Weekend is a gripping, character-driven story that holds up remarkably well today. The movie, the transfer, and the extras are all first-class, making this a DVD Talk Collectors Series Title.