Kino // Unrated // September 29, 2020
List Price: $24.95 [Buy now and save at Amazon]
Review by Stuart Galbraith IV | posted December 3, 2020 | E-mail the Author
Previously released by Kino on DVD in 2004 with many of the same extra features, the classic 1932 musical Love Me Tonight yet it garnered scant attention at the time, this reviewing noting had "this title, with the same transfer and the same set of extras been released with the words "Criterion Collection" printed on its spine, reviewers would be falling over themselves to hail its release."

Kino's new Blu-ray is equally praise-worthy. Made by Paramount, it's the best musical of the early-talkie era and, with Warner's 42nd Street and RKO's Flying Down to Rio the most influential. 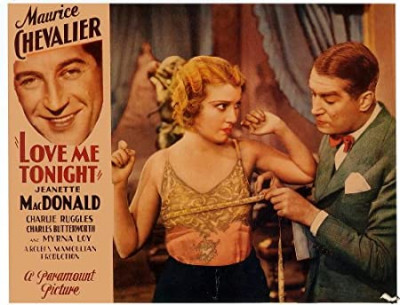 The film is set in present-day (i.e., 1932) pre-war Paris and stars Maurice Chevalier as carefree tailor Maurice Courtelin, carefree that is until playboy Vicomte Gilbert de Vareze (Charlie Ruggles) makes like Donald Trump, skipping town leaving poor Maurice and other merchants with 63,000 francs worth of unpaid-for suits, shirts, and other garments. Determined to get his money, Maurice walks right into the palatial estate of Gilbert's uncle, the Duke d'Artelines (C. Aubrey Smith). The Duke's mansion is filled with ancient, bridge-playing relatives and servants, the only young people living there being the Duke's man-hungry niece, the Countess Valentine (Myrna Loy), and the more wistfully romantic (and recently widowed) Princess Jeanette (Jeanette MacDonald). The Count de Savignac (Charles Butterworth) has designs on the princess, but this twit is obviously no match for Maurice, whom everyone mistakes for a visiting Baron, and who is determined to teach the princess "style, charm, and love."

Love Me Tonight is a real charmer itself, on multiple levels. Of course, there's the great Rodgers & Hart score (which includes the iconic if politically-incorrect "Isn't It Romantic?"), opulent sets, a terrific cast, and a very witty script in the European flavor favored by Paramount during the ‘30s. Indeed, though I read director-producer Rouben Mamoulian's name twice during the opening credits, I spent half the film in the mistaken belief that it had been directed by Ernst Lubitsch. Alleged film historian me felt like a fool until reading colleague Cinesavant's review, in which he acknowledges the confusion as understandable and, I suppose, confusing Mamoulian with Lubitsch is something like a compliment.

Working in films and on the Broadway stage concurrently, in the latter capacity directing the original productions of Porgy and Bess, Oklahoma!, and Carousel, Mamoulian's movie career was spotty and all over the map, with just 16 films to his credit. However, they include Applause (1929), Dr. Jekyll and Mr. Hyde (1931), Queen Christina (1933), Becky Sharp (1935), Golden Boy (1939), and The Mark of Zorro (1940). That's not a bad resume.

For Love Me Tonight, Mamoulian adopted an aggressively cinematic approach. Early talkie musicals of the 1927-1931 period had been mostly static recreations of stage shows, partly owing to the technical primitiveness of early sound recording equipment and its limitations, partly a bad aesthetic choice, locking the camera down and letting the dancers, singers, jugglers, whomever fight to keep their audiences awake. Moviegoers tired of such films were dazzled by Love Me Tonight, and it's still pretty impressively dazzling nearly 90 years later.

Mamoulian takes the possibilities of cinema and stretches it to genuinely startling extremes. The picture's everything but-the-kitchen-sink approach reminds one of Abel Gance's Napoleon or Welles' Citizen Kane; it's really the movie musical equivalent. Mamoulian uses slow motion, fast-motion, multiple exposures, Griffith-like inter-cutting, and always to good effect, never for its own sake but in service to the plot and/or its characters. In the very first number the film has a sudden zoom shot, a good three decades before their use became commonplace. Supposedly it's the first movie to feature one.

The "Isn't It Romantic" number cleverly begins with Chevalier singing to the camera reflected in a three-panel folding mirror. A love duet with Chevalier and MacDonald is sung with them both apart and while they're asleep, in separate rooms. MacDonald, repressively chaste in her MGM operettas beginning in 1934, here is more relaxed and even - gasp! - sexy. And Mamoulian gets everybody into the act. C. Aubrey Smith, Hollywood's ultimate Edwardian stuffed shirt has a solo, while Three Aunts, making like Sleeping Beauty's fairy godmothers, sing, too. One is played by Ethel Griffies, the eccentric ornithologist from Hitchcock's The Birds.

The film's pre-Code aspects will also startle/appeal to film fans. Even the lyrics are dirty ("You'd sell your wife and daughter for just one Latin Quarter") and politically incorrect ("Isn't it romantic? Soon I will have found some girl that I adore. Isn't it romantic? While I sit around my love can scrub the floor.") What's not to love?

Kino's 1.37:1 full frame, black-and-white presentation of Love Me Tonight is quite good, with solid blacks and a sharp image. The original 104-minute theatrical version is apparently lost, as the original negative was cut to 98 minutes. The running time of the Blu-ray clocks in at just under 89 minutes. The DTS-HD Master Audio (mono) improves upon the DVD which, unlike this Region "A" Blu-ray, did not offer English subtitles.

Supplements from the DVD are carried over here. First is a detailed, entertaining and informative audio commentary track with Miles Kreuger, a friend of the late director and an authority on early musicals. Next are two, two-minute excerpts from Hollywood on Parade a series of one-reel musical shorts: Maurice Chevalier Sings "Louise" and Jeanette MacDonald Sings "Love Me Tonight". Both seem to date from about the time Love Me Tonight was released.

Next is what appears to be an original (not reissue) trailer, also in good condition. That is followed by a well-chosen and remarkably clear image gallery, which reveals that some musical numbers were filmed to playback, while others were shot "live," with the orchestra just off-camera. Next is a highly informative set of production documents which contain items like the picture's budget report (total cost: $995,000, a lot of money at a time then most films cost less than $250,000), shooting schedule, and cue sheets. Also included are enlightening "Screenplay Excerpts of Deleted Scenes" and "Censorship Notes."

Fans of Love Me Tonight's stars, of Rodgers & Hart and early talkie musicals need no prodding to seek out this title. Its great old songs are finding new audiences, and even film fans who normally don't like musicals will enjoy Love Me Tonight for its enormous wit. A DVD Talk Collector's Series title.