Kino // Unrated // October 27, 2020
List Price: $29.95 [Buy now and save at Amazon]
Review by Stuart Galbraith IV | posted December 7, 2020 | E-mail the Author
As the 007-inspired spy movie craze began to take hold in 1965, producer Harry Saltzman, already one-half of the team (with Albert R. "Cubby" Broccoli) of the "official" three-years-old James Bond movie series, launched a second series starring Michael Caine as Len Deighton's working-class spy Harry Palmer. While The Ipcress File utilizes many of the same key behind-the-scenes personnel, including production designer Ken Adam, editor Peter Hunt, and composer John Barry, the approach to this spy was completely different. Indeed, The Ipcress File is closer in spirit to the darkest of ‘60s espionage films, The Spy Who Came In From the Cold than it is to any of the Bonds.

Two more Harry Palmer movies, also with Caine, followed, in the same order as Deighton's novels, Funeral in Berlin in 1966 and Billion Dollar Brain in 1967. Caine later returned to the character in two made-for-cable TV movies, Bullet to Beijing (1995) and Midnight in Saint Petersburg, neither based on Deighton stories. Caine is good in those, too, and they're not terrible, but tellingly were cobbled-together productions of dodgy ex-procurer Harry Alan Towers. 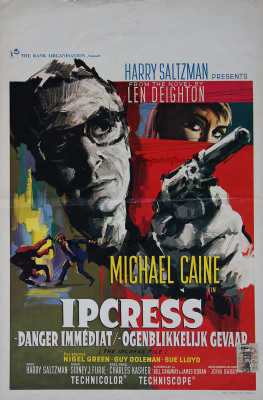 After a scientist called Radcliffe is kidnapped from a train station, Ministry of Defence spy Harry Palmer (Caine) is reassigned by his stiff-shirt superior, Colonel Ross (Guy Doleman, also in Thunderball that same year) to a department run by equally stiff-shirted section head Major Dalby (Nigel Green). Other scientists have either gone missing or returned inexplicably unable to continue their research. Ross and Dalby are deeply suspicious of one another, with Palmer caught between them.

With his contempt for authority, Palmer decides to investigate the case on his own terms, despite his fondness for easy-going colleague Jock (Gordon Jackson) and Jean Courtney (Sue Lloyd), with whom he begins an affair, though Palmer thinks she may be a mole working for Ross.

Palmer quickly tracks down the main suspect in the killings, Grantby (Frank Gatliff), who's accompanied by an imposing, bald bodyguard, Housemartin (Oliver MacGreeny). He tracks them down to a warehouse, but all has vanished by the time Palmer calls for a police raid. He does, however, find a portion of an audio tape labelled "IPCRESS" though the audio is undecipherable electronic gobbledygook. Eventually though, Grantby agrees to return Radcliffe for a substantial ransom, but after the exchange it's clear his mind has been drained like the other scientists. Eventually, as Palmer begins piecing together the mystery he also becomes a target - but by whom?

The Ipcress File cost just $750,000 to produce, significantly cheaper than even Dr. No (1962), the first and by far cheapest of the Bond films at $1 million. In Ipcress, there's no glamorous, high-stakes baccarat on the Riviera, no dazzlingly equipped Aston Martins, no cavernous villain's lair, Ken Adam's involvement notwithstanding. Except for a side trip to Albania (sort of), the movie never leaves rainy, chilly England. Though Palmer is a gourmet chef, he lives in an ordinary bed-sit and needs eyeglasses to see past his nose, very un-Bondian, that.

Like the John le Carré novels, the drab ordinariness and petty bureaucratic rivalries make The Ipcress File far more believable than the increasingly escapist Bond films, which in 1965 were losing the edginess of Ian Fleming's stories once Broccoli-Saltzman saw a swarm of competitors in their rear-view mirror.

Sidney J. Furie directed. He'd won some acclaim for two early features in his native Canada, then moved to England where mostly directed ordinary genre films, though The Leather Boys (1964) is now highly regarded. The Ipcress File, however, is the film that put Furie on the map, and he directs the hell out of it. Working with cinematographer Otto Heller (Peeping Tom), Furie stylizes drab interiors and cloud-shrouded exteriors with disorienting close-ups, from under glass tables, through lamp shades and the like. Filmed in cost-saving Techniscope, that format's more flexible, deep-focus advantages over CinemaScope allowed a freedom Furie and Heller take full advantage of. If the script weren't any good, Furie could rightly be accused of showing off, calling attention to his own cleverness, but the screenplay by Bill Canaway and James Doran is so good (including one incredible plot twist) the weirdness of Ipcress's visual style is always in service to the film. Further complementing things is John Barry's score, which combines some of the musical sensibility of his Bond scores with something darker and more European, Barry prominently orchestrating the film with a cimbalom, adding a sinister eeriness.

Michael Caine had been kicking around for years, mostly in uncredited bit parts in films like The Day the Earth Caught Fire (1961) and The Wrong Arm of the Law. Stanley Baker gave him his big break in Zulu (1964), which led to Ipcress. He marvelously underplays throughout, maintaining the viewer's interest; we in the audience are constantly trying to read behind those placid eyes and mask-like face, through which a wonderfully funny cynicism peak through.

Sourced from an ITV Studios/Network remastering, The Ipcress File mostly looks great though I don't recall either Anchor Bay's 1999 DVD nor the initial UK Blu-ray looking this dark and drained. Audio is offered in both a DTS-HD 5.1 Master Audio mix and a DTS-HD 2.0 mono version. Optional English subtitles are provided on this region "A" encoded set.

Kino has seemingly combined extras from the Anchor Bay DVD and ITV's Blu-ray, while adding a thing or two of their own. They include two audio commentary tracks: the Anchor Bay one with Furie and editor Peter Hunt, and a new track with film historians Troy Howarth and Daniel Kremer. The former is particularly entertaining, Furie lashing out uncontrolledly at producer Saltzman, while Hunt, far too polite for such scandalous talk, is more diplomatic. Also included is an enjoyable and long (20 minutes) interview with Caine, and a separate, shorter interview with Ken Adam. Also included is a Trailers from Hell segment with screenwriter Howard Rodman; trailers, radio spots, and an image gallery.

One of the best ‘60s spy films (indeed, one of the handful of really good ones), The Ipcress File is great fun and the presentation here along with the extras make this a DVD Talk Collectors Series title.