Film Movement // Unrated // October 27, 2020 // Region 0
List Price: $29.95 [Buy now and save at Amazon]
Review by Stuart Galbraith IV | posted December 7, 2020 | E-mail the Author
Mr. Topaze (1961) is a real curiosity. It's the only movie directed by Peter Sellers, who also stars, and for decades all but impossible to see. The film received mixed reviews and flopped at the box-office, and apparently Sellers himself had all theatrical prints withdrawn and destroyed. The original camera negative apparently no longer exists or is otherwise inaccessible. The British Film Institute eventually located Sellers's personal 16mm reduction print, and two faded 35mm theatrical prints were used for its 2K mastering.

The movie is an adaptation of Marcel Pagnol's play Topaze, already filmed seven times prior to Sellers's version, including twice by Pagnol himself, in 1936 starring Arnaudy, and twenty years later in a version starring Fernandel. Sellers's version is most unusual: superficially it resembles other "little" British comedies of the period, and was marketed along similar lines, suggesting a comedy like School for Scoundrels. However, what makes Mr. Topaze (U.S. title: I Like Money) fascinating is its authentic French flavor, and how closely it adheres to Pagnol's style of comedy-drama. Not very much happens, but the mildly eccentric characters are fascinating and, for the most part, exceedingly well-played by its excellent cast. 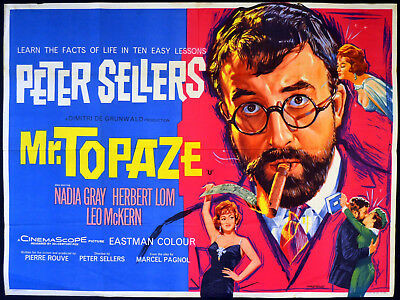 Mr. Topaze (Sellers) is a dedicated teacher at a small private elementary school in a small French town. (The film seems to be set around the same time the play was written, the late-1920s.) Soft-spoken and honest to a fault, he's in love with fellow teacher Ernestine (Billie Whitelaw), the daughter of the eccentric headmaster/owner, Muche (Leo McKern). Though gentle and unfailingly patient with his charge of unruly kids, Topaze is fired after refusing to alter the failing grades of one student, the grandson of a Baroness (Martita Hunt).

Despondent, Topaze accept a job as the front man of a crooked financial enterprise run by Castel Benac (Herbert Lom) and his mistress, musical comedy star Suzy (Nadia Gray). A simple man but no fool, Topaze soon realizes they're playing him for a patsy.

The first half of Mr. Topaze is rather remarkable. Exteriors were wisely photographed in well-chosen locations in France (by John Wilcox), while studio interiors, though shot at MGM Boremwood Studios in the U.K., through Don Ashton's production design capture the place and period with great verisimilitude.

And while, superficially, the basic plot is not unlike many other British comedies of the period, the approach to the material is completely different, specifically, true to Pagnol. Like, for example, Pagnol's 1938 film The Baker's Wife, not a whole lot happens over the course of its story, but its characters, who often have long monologues or conversations with one another, gradually reveal their eccentricities and humanity in ways that are uniquely mesmerizing.

All importantly, Sellers himself does not disappear into one of his usual eccentric characters with a funny voice. Though amusing at times, it's nearly a straight dramatic creation, a man who speaks so softly throughout he almost whispers, whose placid demeanor is often mistaken for naïveté if not outright stupidity, yet who through his quiet observation of others is more aware of the characters around him than he lets on.

In the first half of the story, Sellers plays most of his scenes opposite Leo McKern's headmaster and Michael Gough, playing Topaze's closest friend, the school's science teacher. McKern commits to a genuinely odd but beguiling characterization, fidgety and manipulative, complete with an unusual (for McKern) shrill speaking voice. Gough, who tends to be reserved in prestige films and outrageously hammy in cheap genre films, here finds a wonderful middle ground, extravagantly expressive and warmly emotional as a counter to Topaze's reticence. Both McKern and Gough are delightful, and for each Mr. Topaze is among their best work in films.

Attempts to stage the play and the various film versions have all struggled with Topaze's character arc, audiences embracing the first part of the story while divided in their opinion about the second half, when Topaze's character gradually abandons his strict moral code and becomes most unsympathetic, if tragic. In Mr. Topaze, Sellers's direction seems less exacting, the second half coming off more like an ordinary British comedy as the story shifts to the Herbert Lom and Nadia Gray characters. Lom's character is a bit like his Dreyfuss character in the Pink Panther movies, the later ones especially, when the actor was often the only bright spot of those films, but here he holds back (or was held back by Sellers) just a wee bit too much. Romanian actress Nadia Gray is miscast; she's too modern in appearance, and can't properly convey the ambiguities of the character. One doubts she was Sellers's first choice for the part. Fortunately, a marvelous scene featuring John Le Mesurier as a blackmailer, and a superbly acted final scene between Sellers and Gough at the very end redeems the film.

Filmed in color and 2.35:1 CinemaScope, Mr. Topaze was sourced for Blu-ray in 2K by Film Movement from the only (apparently) surviving film elements: two faded 35mm prints and Sellers 16mm reduction print. In correcting the strong magenta of these elements, the color has been corrected but, on Blu-ray, is significantly desaturated. Oddly, this actually helps the film: had the colors been more vibrant, that look would have gone against the film's mostly drab settings. The image is sharp and the color is there, just greatly subdued. The mono optical track from one of the prints served as the source of the audio. Other than one splice-caused jump cut, the image is impressive for what it is. SDH are provided and the disc is region-free.

The Criterion-level supplements include an excellent, full-color booklet featuring excellent graphics and strong essays by Vic Pratt and Roger Lewis. Let's Go Crazy is a 30-minute short from 1951 starring Sellers in various guises (including as Groucho Marx) in a nightclub setting. Fellow Goon Spike Milligan also appears in this modest short, really a patchwork of lesser musical acts (including a shameless rip-off of Spike Jones and His City Slickers) with Sellers around between acts. "The Poetry of Realism" is a curious video essay by Kat Ellinger, curious in that her good discussion about Pagnol is illustrated entirely by good stills from Mr. Topaze, regardless of what she's talking about. "Abigail McKern Interview" is a real charmer, the actress saying very little about Mr. Topaze explicitly, but much about her father's relationship with Sellers and her and Leo's experiences on varied projects, including The Beatles' Help! (1965) and David Lean's Ryan's Daughter (1970).

Though only a partial success, Mr. Topaze is nonetheless one of the most interesting projects of Peter Sellers's career in films, a nearly lost film restored here and buttressed with fine extras. A DVD Talk Collectors Series title and one of the best releases of 2020.