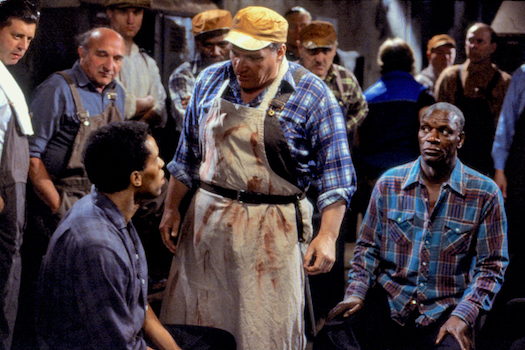 The 1984 fact-based drama The Killing Floor looks at the struggle to unionize the Chicago Stockyards in the late 1910s. The main character is Frank Custer (Damien Leake), a black man from the southern U.S. who travels with his best friend Thomas (Ernest Rayford) in search of war-time work. Frank is assigned to mop up the blood from the stockyard kill floor but realizes that the only way to move up is to become a butcher. Union man Bremer (Clarence Felder) sees Frank's quiet but insistent drive and figures he's the kind of man they need to join the union and convince the other black workers to join as well.

Scripted by playwright Leslie Lee (based on a screen story by Elsa Rassbach and adaptation by Ron Milner) and directed by Bill Duke (Hoodlum), The Killing Floor was first broadcast as an episode of American Playhouse on PBS. Anyone who was in public school in the '80s and '90s -- and spent many an afternoon watching videos their teachers taped off public television -- will recognize the low-budget, almost-filmed-theater flavor that permeates The Killing Floor. But while the film can't quite transcend its budget -- stock footage is used to add a sense of scope to the bare-bones proceedings -- the story and performance generate moments of high drama that suggest fancy sets aren't everything.

The main conflict for Frank is that he must navigate two worlds, as a black man and as a union man. Shaft's Moses Gunn plays Heavy Williams, an older black worker who harangues Frank for becoming a pawn of the white union men. Meanwhile, the union men complain about black scabs, but then assure Frank they obviously don't mean him. Both sides have legitimate reasons to be wary, which make the choices Frank must make all the more compelling.

The film tracks Frank and the other meat workers' precarious relationship with the "packers" (that is, the owners of the meat companies) through the end of the war and the 1919 race riots in Chicago. When the union leaders fail to step up for their black members during the riots, many of them quit the union. Frank is seemingly left abandoned by those who trusted him and those he trusted.

Damien Leake's performance elegantly guides the audience through the film's political history. At first, he seems like a wide-eyed innocent, overwhelmed by the realities of urban life. Leake soon makes it clear that Frank's friendly nature is as much a clever tool to ingratiate himself with those he wants to impress as it is evidence of his essential decency. The dramatic highlight of the film is an inevitable shouting argument between Frank and Heavy after the riots have kept the black workers starved and out of work. Heavy tries to humiliate Frank for picking the wrong side, but Frank refuses to accept the idea that of the two of them he is the sellout. Both actors let the characters' long-simmering enmity explode, and neither one is doing any pretending anymore.

The film is filled to the brim with great character actors. So many, in fact, that a lot of them get short shrift. Alfre Woodard, for example, plays Frank's wife; her performance in a gentle romantic scene after the two are reunited in Chicago is a highlight, but then she mostly just gets to worry in the sidelines of scenes. Other familiar faces who brighten the corners of the film include Dennis Farina, John Mahoney, Mary Alice, Stephen McKinley Henderson, and Ted Levine.

The Killing Floor is a message movie that is smart enough to place its primary focus on delivering a potent drama -- with ambiguity and unpolished edges -- rather than a heavy-handed sermon. Not all moments avoid TV-movie patness, but the film resonates as a still-relevant and creative reflection of a significant chapter in American labor history. 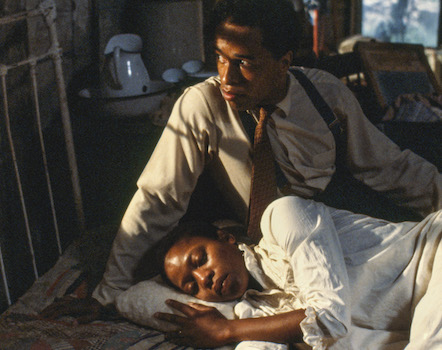 The Blu-ray
The Killing Floor is packaged with a booklet featuring essays by James R. Barrett and Joe William Trotter, Jr.

The Video:
The AVC-encoded 1080p 1.33:1 presentation is sourced from a new 4K restoration. One must assume that this is the best that the film (shot on 16mm) has looked. Even so, the low-budget nature of this production keeps it from being a particular eye-grabber. The digital image is free from dirt and damage, though. And, apart from the beat-up stock footage which typically acts as segues between scenes, the level of detail and and saturation of color is strong throughout.

The Audio:
No complaints from the LPCM mono audio. Dialogue, ambience, and musical score are all well-supported without drowning each other out. An English SDH option is provided.


Final Thoughts:
The Killing Floor mines similar territory as Upton Sinclair's classic novel The Jungle and John Sayles's indie opus Matewan. It finds the human story at the center of the early labor movement and makes it awfully compelling. The great cast easily overcomes the limits of the low-budget production. Recommended. 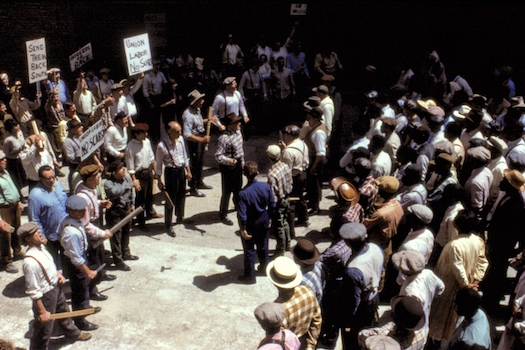