I have said it before, and I will say it again: I miss director Tony Scott. Younger brother to filmmaker Ridley Scott, Tony Scott could shoot the hell out of an action movie. I reviewed Paramount's solid 4K Ultra HD edition of his Days of Thunder back in May, which was released alongside an updated 4K edition of Top Gun. DVD Talk legend Adam Tyner reviewed that disc over the summer, and pretty much has the last word on the film. The only difference in the edition I was sent is the Steelbook packaging. You know if that is your thing or not. At thirty-four-years young (like me!), Top Gun is still a hell of a ride. From the gorgeous photography to the aerial acrobatics to the endlessly quotable lines, you will definitely feel the need, the need for speed.

It strikes me that Top Gun's replay value is through the roof. I may have rolled my eyes at the beach volleyball scene as a teenager, but this is movie that has entertained me for the better part of three decades. A young Tom Cruise knocks it out of the park as Pete "Maverick" Mitchell, the son of a fighter pilot, who is cocky and prone to breaking the rules but incredibly talented in the air. He and buddy Nick "Goose" Bradshaw (Anthony Edwards) get sent to TOPGUN, the Navy's Fighter Weapons School, where they fight to be the best of the best. A winning supporting cast includes Val Kilmer as quasi-villain Tom "Iceman" Kazansky; Kelly McGillis as Charlie Blackwood, a civilian instructor, ball-buster, and love interest for Maverick; and Michael Ironside as a TOPGUN instructor. The brotherhood is genuine, the romantic chemistry is believable, and Top Gun is a surprisingly character-based film.

Because Tony Scott directed Top Gun, it looks f'ing amazing. The effects are far ahead of their time; viewers actually get orientated during dogfights, so the stakes are apparent; and the bold cinematography by Jeffrey L. Kimball plays with light, color and shadow. Plenty of action, melodrama, soundtrack staples and humor make Top Gun one of the most entertaining films of the 1980s. Top Gun does not devolve into some overly serious, world-terrorism thriller, instead focusing on the interplay between the TOPGUN recruits. Movies like this are not made in 2020. Top Gun on 4K Ultra HD, in whatever packaging variant you choose, is absolutely worth owning.

As Adam noted in his review, Top Gun looks sweet in 4K. The 2.40:1/2160p/HEVC/H.265 native 4K transfer with Dolby Vision and HDR10 blows Paramount's dingy original Blu-ray release out of the water. Gone are spots of edginess, obvious digital noise reduction, and filtering; the remastered 4K (and accompanying Blu-ray) edition offers a wonderfully lifelike, cinematic presentation with deep, bold colors thanks to a gorgeous HDR pass. Fine-object detail is excellent, blacks are inky, and shadow detail is very impressive. Every lens flare, smoky interior, and high-contrast outdoor shot unspools in perfect clarity. Highlights are kept in check, skin tones are accurate, and print flaws are not an issue. There are some minor issues with clumping grain and artifacting (possibly a source issue coupled with an encoding issue) that do not begin to tarnish what is overall an excellent transfer.

I sampled the Dolby Atmos mix as a 7.1 Dolby TrueHD soundtrack, and it is a nearly perfect surround mix. Elements arrive from far and wide to make use of the entire sound field, including the LFE. The track's balance and range are exceptional; all elements, including dialogue, effects and soundtrack, are layered appropriately. Crowding and distortion are never an issue. Dialogue is crisp and clear. Berlin and Kenny Loggins sound fantastic. Jet engines scream across all channels, and viewers are placed inside the cockpit in this aggressive surround mix. German, Spanish, Italian, French, Portuguese, Japanese and Russian 5.1 Dolby Digital dubs are included, as are a host of subtitle options.

This two-disc set includes the 4K and Blu-ray discs plus a digital copy code. The original 4K edition came packed in a standard black case that is wrapped in a glossy slipcover. This is the Steelbook edition. The attractive, nostalgic design includes hand-drawn images of the characters and a blue-and-white color scheme. The interior artwork continues that scheme with images of clouds and some fighter jets. This is a relatively simple, attractive Steelbook if you collect these. 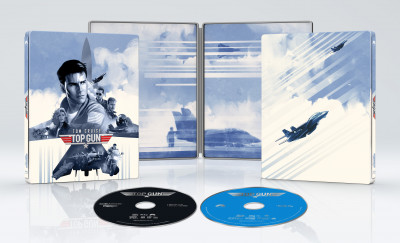 Top Gun looks and sounds better than ever on Paramount's recently released 4K Ultra HD edition. The film stands the test of time and provides nonstop entertainment thirty-four years after its initial release. If you do not yet own this title on 4K and are a fan of Steelbook packaging, this is likely the edition for you! Highly Recommended.