Buck Rogers in the 25th Century - The Complete Collection

Kino // Unrated // November 24, 2020
List Price: $99.95 [Buy now and save at Amazon]
Review by Stuart Galbraith IV | posted December 29, 2020 | E-mail the Author
Way back in March 1979 - Was it really nearly 42 years ago? - I dragged several pals to the Wayne-State Theater to see the movie Buck Rogers in the 25th Century. I wasn't expecting something as visually stupendous as Star Wars, but the production had been hyped in the pages of Starlog magazine and elsewhere with tantalizing pre-production artwork. I was already a fan of the original 1939 serial starring Buster Crabbe and its like-minded half-brothers, the Flash Gordon serials made before and after it. What could go wrong?

I recall slowly sinking into my theater seat even before the end of the silly opening titles, used in the movie but not the subsequent series, a disco-y, half-baked attempt to emulate the 007 title designs of Maurice Binder. By the time the house lights came up I was pretty mortified, and my unforgiving friends never let up about what a rotten movie-going experience that Buck had been.

The TV series debuted six months later and proved even worse. I didn't watch it religiously, but never completely gave up on it, either. Its second, abbreviated season (13 episodes versus the first season's 24) was in some respects an improvement, though it too had its share of awful episodes. Few mourned its ignominious cancellation in the spring of 1981.

Revisiting the complete series (plus the original theatrical version of the pilot), all presented in glorious high-definition, Buck Rogers sometimes fascinates, at other times appalls with its awfulness and, for its time, one can almost admire the chutzpah of even attempting such a technically challenging series. That said, as TV junk food Buck Rogers can be a lot of fun when viewed in the right frame of mind, especially as an artifact of ‘70s/early ‘80s television production. 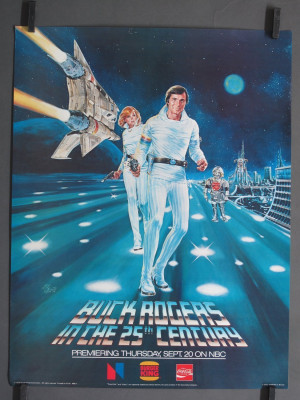 The movie and subsequent series follow the adventures of NASA astronaut Capt. William "Buck" Rogers (Gil Gerard), who in 1987 is aboard the (mini) Space Shuttle Ranger 3 when it encounters a never-explained "space phenomenon" that cryogenically freezes Buck and leaves his ship drifting for (a bit more than) 500 years. Returning to a post-apocalyptic earth, Buck is initially met with suspicion by Col. Wilma Deering (Erin Gray), and scientist Dr. Huer (Tim O'Connor), leader of earth's defense forces, who doubt Buck is from earth's past, and that he might actually be some sort of spy. So too believes Princess Ardala (Pamela Hensley, vamping to the point of resembling a female female impersonator) of the planet Draconia (also the name of her flagship) and aide de camp Kane (Henry Silva), an earthman, bent on conquering earth. But, with Buck's help, aided by diminutive robot drone Twiki (Felix Silla, voiced by Mel Blanc) and Dr. Theopolis (voiced by Howard F. Flynn), a portable computer that resembles ‘70s electronic games like "Simon," Ardala's and, particularly, Kane's plans of conquest are thwarted.

The series was developed mainly by Glen A. "Larceny" Larson, a prolific television producer infamous for developing shows suggested by successful movies (Butch Cassidy and the Sundance Kid -> Alias Smith and Jones; Star Wars -> Battlestar Galactica, etc.) and especially for stealing plot points from better, more successful series, changing the character names and calling them his own. James Garner repeatedly complained about Larson stealing Rockford Files plots and eventually punched Larson with such force that, reportedly, Larson was flung backwards into a motor home, crashing through the other side a la Wile E. Coyote.

Larson is often compared to Irwin Allen who, 15 years earlier, churned out similarly gaudy, undernourished sci-fi shows with similarly poor teleplays. Not in the same league as Rod Serling's Twilight Zone or Gene Roddenberry's Star Trek, Buck Rogers was admittedly aiming lower, based as it was on Philip Francis Nowlan's character, famous mainly as a comic strip beginning in 1929 though soon outclassed by Alex Raymond's superior Flash Gordon. Had the show emulated the spirit of the strip and subsequent 1939 movie serial (also made by Universal) it might have played better. Instead, it has the tacky polyesterized look of other sausage factory Universal fare.

In overseeing the program, Larson is primarily to blame for the show's fundamental problems, repeated almost religiously throughout its run. In every episode, for instance, Buck uses colloquialisms anachronistic by the 23rd century that always-but-always result in bemused reactions by everyone around him. Twiki adopts Buck's slang, too, resulting in a more mass confusion that leads nowhere. Twiki itself isn't a bad character, but Mel Blanc's cartoony voice and the casual informality of the dialogue is tiresome.

Erin Gray is gorgeous and Tim O'Connor rises above the material (reportedly he loved the comic strip and was eager to appear in the series) but Gil Gerard is lacking. The actor was apparently unhappy with the direction of the show, was often difficult on the set, and even threatened with legal action. Whatever extent that might have impacted production of the series, watching these episodes again (or for the first time), Gerard often comes off as dispirited and disengaged with the material. In the original serial, Buster Crabbe was no great thespian but, as with his portrayal of Flash Gordon, Crabbe's Buck Rogers was spirited and genial, highly likeable where Gerard comes off almost darkly moody at times.

For its second season, producer John Mantley, late of Gunsmoke took over the producing reins and the format was radically changed. Dr. Huer, Dr. Theopolis, Princess Ardala and Kane simply vanished without explanation, the new season inexplicably set not on earth but aboard the starship Searcher seeking other tribes of humanity. New to the cast were Wilfred Hyde-White as doddering Dr. Goodfellow, Jay Garner as Admiral Asimov (!), and Hawk (Thom Christopher) a bird-like humanoid seemingly meant to introduce a Mr. Spock-like alien to the cast. In place of Dr. Theopolis a new robot named Crichton (voiced by Jeff David) was added, but the crude mechanical prop and its snobbish characterization hurt rather than helped the show.

On the plus side, the special effects, by now essentially done in-house, by Universal Hartland, moved away, at least stylistically, from the Star Wars-influenced look incorporated into Battlestar Galactica and early episodes of Buck Rogers. Given the limited time and budget available, these visual effects are occasionally impressive and ambitious; by the end of season one the look of the visual effects surpassed those of Galactica considerably. Kudos to that effects team for trying new things.

Conversely, the tacky set design, costumes, and mechanical effects plus the standard TV production aspects of the lighting, camerawork, and direction made Buck Rogers look much like other late-‘70s/early-‘80s television. Both seasons retool props, sets, and costumes left over from the by-this-time cancelled Galactica and other Universal productions, dating at least as far back as Robert Wise's The Andromeda Strain (1971) and perhaps earlier.

Some episodes, like season two's "Shgoratcxh!" about seven playful (and horny!) dwarf soldiers, is so appalling it would fascinate were it not so dull. Conversely, the two-part "Flight of the War Witch" and "Buck's Duel to the Death" aren't awful when viewed through the prism of comic strip/serial-style ambition, and each benefits from strong guest casts: Sid Haig, Julie Newmar, Sam Jaffe, Vera Miles and her daughter, Kelley Miles, in the former, and Keith Andes and William Smith in the latter. Indeed, the list of guest stars on Buck Rogers is a dizzying mix of talent: Jamie Lee Curtis, Dorothy Stratten, Jerry Orbach (!), Gary Coleman, Jack Palance, Buster Crabbe, Cesar Romero and Roddy McDowall among them.

Kino's Buck Rogers in the 25th Century: The Complete Collection is a handsome boxed set divided into three standard Blu-ray snap cases. The first contains the theatrical feature version of the pilot, presented in its original 1.85:1 widescreen, while the two seasons of the series each get their own case and are presented in their original 1.37:1 standard format. For the most part, everything looks great. The special visual effects understandably look grainer; likely they weren't film in large formats like VistaVision as many big sci-fi features of the time were doing, but still impress with their ambition. The DTS-HD 2.0 mono is fine for what it is and optional English subtitles are provided on these Region "A" discs.

Supplements abound. They include an audio commentary track on the feature film by Steve Mitchell and Nathanial Thompson, while for the series TV historian Patrick Jankiewicz does the chore on eleven of the episodes. While a little on the fannish side, I found Jankiewicz's screen-specific commentaries, fairly packed with interesting trivia about locations, props, behind-the-scenes anecdotes and the like, often more entertaining than the episodes themselves.

Also included on the feature is a trailer, an extended "theatrical preview" which basically condenses the entire film over 10 minutes, and radio spots. Supplements conclude with two good on-camera interviews, first with still-lovely Erin Gray and actor Thom Christopher.

Never what one might call good but frequently nostalgic "comfort food" TV viewing, Buck Rogers in the 25th Century: The Complete Collection is mainly for nostalgic fans, but for them it's Highly Recommended.