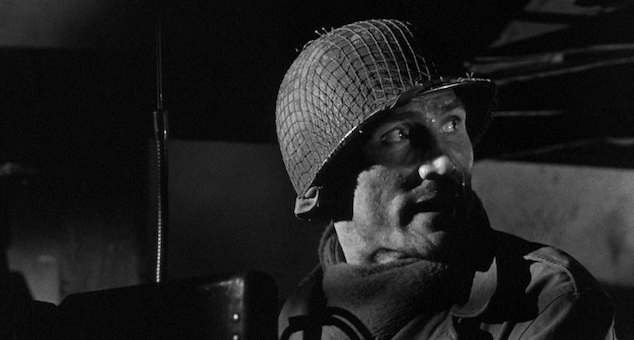 The 1956 World War II flick Attack is the work of director-producer Robert Aldrich, best known for the tough noir Kiss Me Deadly and the aging diva showcase Whatever Happened to Baby Jane?. Attack, oddly enough, plays like a tonal hybrid of that early film's hardboiled toughness and the latter film's camp theatricality.

Jack Palance is a primo man's-man as Lieutenant Costa, the tortured hero/antihero of the picture. The source of his torture is his superior officer, the foolish, cowardly, and quietly cruel Captain Cooney (Eddie Albert). At the beginning of the film, Cooney fails to make good on a promise to back up a squad of Costa's men in battle. When Cooney chokes, a dozen good men get mowed down by the Germans. Cooney faces no reprimand because he has done his share of favors for the good-ol'-boy Colonel (Lee Marvin). Another well-meaning lieutenant (Papillon's William Smithers) tries to get the Colonel to get rid of Cooney, but the Colonel just hopes to run down the clock on the war.

Unsurprisingly, the characters don't luck out and avoid further combat. Cooney's company is told to capture a French town from the Germans, and Cooney bungles the strategy. He sends Costa and his platoon on a mission that is sure to put them in jeopardy, and then inevitably fails to back them up again.

The first two-thirds of the flick has the spareness and clear-eyed attitude one would associate with a Sam Fuller war flick like Fixed Bayonets!. But then in that final third, Eddie Albert and Jack Palance's characters go a bit... mad. Their bitter hatred and rivalry suddenly becomes operatic. Both actors are well-suited to the challenge -- and Joseph Biroc's contrast-y cinematography suits the stylized mood well -- but the film loses its footing just a bit here. For example it's arguably not more interesting to have Eddie Albert's character deliver a drunken soliloquy about the hard-nosed dad he could never satisfy, especially because the film mostly seems to do it just to intimate the character is gay -- or a least a classic ineffectual film "sissy" -- whose pathology can be explained away as daddy issues.

And the decision to have one of the fallen soldiers prominently freeze his face in a shocked, wide-eyed death rictus for the concluding five minutes of the film might the campiest thing I've seen in a supposedly serious movie.

But mostly, the performances are great. Aldrich peoples his film with memorable character actors. The Beverly Hillbillies' Buddy Ebsen is Palance's platoon sergeant. Robert Strauss and Richard Jaeckel are a pair of bickering privates. Gilda's Steven Geray and Wages of Fear's Peter van Eyck appear as a couple of German soldiers who cross paths with the doomed platoon. A briefly glimpsed Strother Martin meets his maker in the opening scene.

Even though the tonal shift of the final section really jarred this reviewer, Attack is still a well-acted and entertaining war flick. 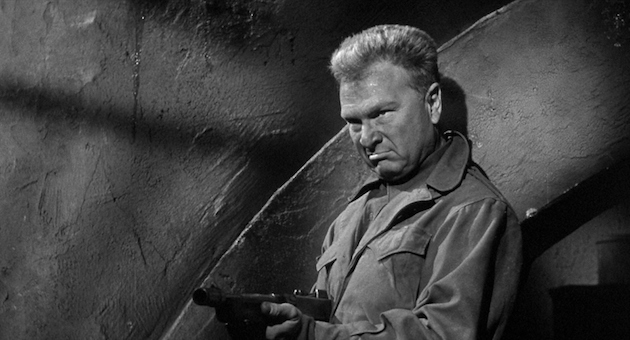 The Blu-ray
The Video:
The AVC-encoded 1080p 1.85:1 presentation looks excellent. MGM clearly provided a great master to Kino, and Kino has been doing a good job of putting their recent reissues on BD-50s that allow for a generous bitrate that minimizes encoding issues. As such, this is a clean and stable presentation, with nuanced contrast, crisp detail, and a satisfying filmic look.

The Audio:
The DTS-HD MA 2.0 mono audio sounds excellent. The dialogue is mostly quite clear. A few brief moments of muffled dialogue in some of the larger scale scenes, but this is presumably originates in the mix. Effects are powerful and well-delineated; some sound a bit canned, but again this goes back to the original sound design. Frank De Vol's music is well-supported without drowning the other sound elements. An optional English subtitles track is offered. In the plus column, the track also transcribes the dialogue in French and German instead the typical cop-out "(speaking foreign language)." In the minus column, the subtitles often rephrase the English dialogue to make it shorter, which can be distracting.

- for this film, plus these other Robert Aldrich flicks: Ten Seconds to Hell, Apache, Ulzana's Raid, The Killing of Sister George, and The Grissom Gang. At the tail-end is a trailer for Cornel Wilde's war flick Beach Red.

Final Thoughts:
Robert Aldrich's Attack is tense and well-acted, with a first-rate cast. The story gets a bit strange and theatrical in its final third, which threw me personally. Even so, if you're a fan of war flicks or the cast, this one still comes Recommended. 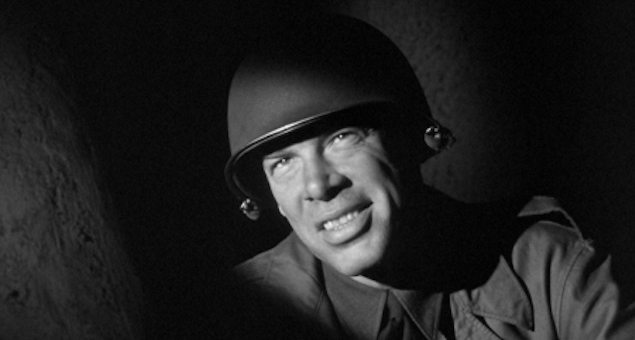