Kino // Unrated // December 8, 2020
List Price: $49.95 [Buy now and save at Amazon]
Review by Stuart Galbraith IV | posted January 4, 2021 | E-mail the Author
During the 1950s, Universal-International, as it was then known, liked its stars homegrown. With the major exception of free-lancer Jimmy Stewart, one of the top box-office draws of the 1950s, most of U-I's leading men came from within: Jeff Chandler and Tony Curtis became big stars there, Clint Eastwood and David Jassen would stall, blossoming in the 1960s. Others, like Richard Carlson, John Agar, and Rex Reason toiled in B-pictures. But Universal's biggest homegrown attraction was Rock Hudson, whose popularity would eclipse Stewart's before the decade was out.

Rock Hudson had already appeared in more than a dozen features prior to Seminole (1953), the earliest film in Kino's new three-movie set, and received top billing in just one other before it, The Lawless Breed (also 1953). Seminole and the other two titles, The Golden Blade (1953) and Bengal Brigade (1954) are mostly trivial, standard genre films, none a great addition to Rock's resume. But like John Wayne and his B-Westerns of the 1930s, Hudson used these trifles to learn the craft of film-acting while U-I built Hudson's fan base. Shrewdly, all three movies appeal to a wide spectrum of movie audiences: men and women, children and teenagers. All three films are basically higher-end B-pictures gussied up with Technicolor and very slightly better production values than the usual U-I ‘50s feature. 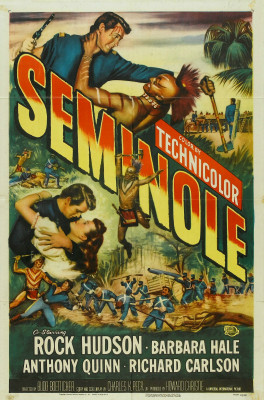 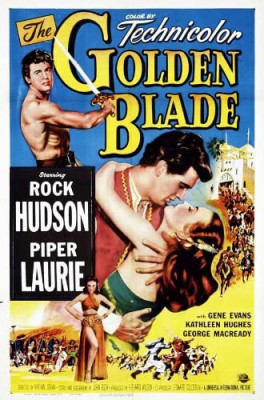 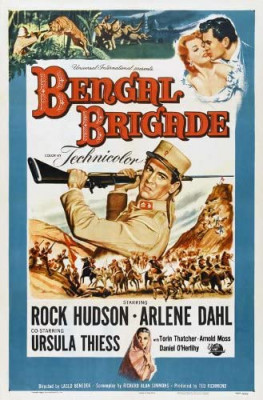 Seminole is, to a large extent, a reworking of John Ford's Fort Apache (1948), transplanted to the swamps of 1835 Florida Territory, with Rock Hudson and Richard Carlson in roles played in Ford's great film by John Wayne and Henry Fonda. Charged with the murder of a sentry, Lt. Lance Caldwell (Hudson) recalls via flashbacks his posting as a scout at a fort commanded by Major Harlan Degan (Carlson), an ambitious martinet determined to further his career by wiping out, rather than negotiate a peace settlement, with the Seminole Indians.

Raised in the area, Caldwell loves Revere Muldoon (Barbara Hale), but she's secretly in a relationship with Caldwell's childhood friend, the half-Indian chief of the Seminoles, Osceola (Anthony Quinn). Osceola, like Caldwell, is anxious to negotiate a peace settlement, but Degan is determined to wipe them out in an ill-advised, Little Big Horn-type raid.

The unusualness of the setting, with few Westerns dramatizing famed Osceola or the Seminoles, is a plus, and by most accounts the film, while heavily fictionalized for dramatic purposes, nevertheless is historically accurate in terms of the big plot points and in many of the details, with Degan based on real-life figure Thomas Jesup, whose actions were later condemned in the court of public opinion. The period costumes of both the soldiers and the Seminoles also appear accurate, though Universal's sound editors lazily tracked African and Asian wildlife for background noise including, most anachronistically, a Kookaburra. Merry merry king of the bush he may be, but not in Florida.

The film's one big flaw is Richard Carlson's overwrought performance, though Charles K. Peck Jr.'s screenplay does the actor no favors, with Degan a bloodthirsty screamer with zero charm, no redeeming features at all. Rock is fine, a confident leader when scenes call for that, and restraining himself believably when his duties as a soldier include following the orders of a madman. Barbara Hale, four years before debuting as Della Street on Perry Mason, does what she can with a mostly thankless role though she's active in the film's narrative and no distressed damsel.

The supporting cast is memorable. Lee Marvin has a juicy early role as a Sgt. Magruder, torn between his long service under Degan while also realizing he's criminally incompetent. Hugh O'Brian is, unexpectedly, a formidable presence as Osceola's political rival, particularly in full war paint. As Cpl. Gerard, a young James Best is put through the ringer, taking most of the story's physical abuse, including having his arm crushed by a wagon wheel and nearly drowning in quicksand.

The Golden Blade is a throwback to Universal's costume adventure films of the 1940s, the Technicolor spectacles starring Maria Montez, Sabu, and Jon Hall. This one is a strange confection with mild fantasy elements and a dash of high camp, though mostly this Arabian Nights knockoff plays it with a straight face. It also, peculiarly, liberally borrows from the Sword in the Stone.

Here Rock plays Harun, anxious to avenge his Basran's father death in a battle with soldiers from Baghdad. In Baghdad Harun buys a seemingly worthless gold-colored and jewel-encrusted sword that turns out to have magical powers. It cuts through metal like butter and makes Harun impervious to injury. Harun also meets spunky Khairuzan (Piper Laurie), revealed to the audience but not Harun as a princess; for a time, she also disguises herself as a boy/runaway slave, though Harun catches on pretty quick.

Khairuzan's father, the Caliph, is reluctant to agree with sinister Vizier Jafar's (George Macready) warmongering or with his desire to have his oafish son, Hadi (Gene Evans), marry the princess. Jafar, of course, wants to take control of Baghdad, and plots his way to the throne.

It's standard stuff most of the time, but has its moments. Piper is just wonderful masquerading as a boy; she affects this higher-pitched voice that really sounds like a kid, at least the type of voice one would hear in cartoons. Though it's a little depressing to see the underrated Gene Evans playing a big dumb oaf in this, so soon after his dazzling performance in Sam Fuller's Park Row (1952), which should have made him a star, George Macready is appropriately villainous as Jafar, amusingly revealing his own banner while usurping the throne, a design dominated by scorpions. The throne room climax is staged well, though the supposedly heavy stone walls wobble noticeably here and there.

In Bengal Blade Hudson plays English (but not English-accented) Capt. Jeffrey Steven Claybourne. On Christmas Day, 1856, he leads a group of loyal Sepoys (British Indian soldiers), loyal because of Claybourne's respect for Indian culture and shared desire for eventual Indian independence. Col. Morrow (Torin Thatcher), whose daughter Vivian (Arlene Dahl) is hand in marriage is sought by both Claybourne and Capt. Ronald Blaine (Dan O'Herlihy), orders the two to lead an assault on fortified brigands, but Claybourne's Sepoys are lured into a trap. When Morrow refuses to send reinforcements, Claybourne disobeys a direct order to rescue them. Court-martialed, he resigns his commission.

Now unable to marry Vivian, Claybourne loses all interest in life, nearly allowing himself to be mailed to death by a tiger during a hunt. Later, Indian leader Rajah Karam (Arnold Moss) offers Claybourne the position of leading his revolutionary army in the fight for independence, Sepoy resentment against the British fueled by rumors they're being provided with cartridges oiled with beef fat, their consumption when the Sepoys bite off their paper wrappings thus "stealing" their Hindu souls.

Story-wise, Bengal Brigade is nothing much, chockfull as it is with British Empire clichés. Hudson is never convincing as a mid-19th century Englishman; in civvies he looks almost contemporary. But as a mid-level "A" production the film has a lot of flash: big backlot sets, colorful period costumes, and plenty of lively action.

The best things about Bengal Brigade is Michael Ansara as Sgt. Maj. Furan Singh, Claybourne's loyal right-hand man. Always an imposing presence, Ansara makes a strong impression saying very little, the Lebanese-Syrian actor not too much of a physical stretch playing (presumably) a Sikh. All three features in this set have white actors in "blackface" of one sort or another, but while The Golden Blade is escapist fluff, both Seminole and Bengal Brigade treat the repressed/threatened races with a kind of clunky empathy, hero Rock clearly on their side.

Seminole, filmed in Technicolor and 1.37:1 standard framing, suffers from pretty bad matrix misalignment. Individual shots look splendid with incredible richness, but much of the picture has the color elements noticeably misaligned. The Golden Blade looks like it was probably shot for 1.37:1 but may have been released in widescreen, at least based on the title blocking. Also in Technicolor, it too has some really rich cinematography and without the alignment issues of Seminole. Bengal Brigade is in 1.85:1 widescreen. All three are presented in DTS-HD Master Audio (mono) and sound okay. Optional English subtitles are provided and the three discs, each given its own Blu-ray case, are Region "A" encoded.

Supplements include two new commentary tracks: critic Nick Pinkerton on Seminole and historian Phillipa Berry on The Golden Blade. Trailers for all three films round out the extra features.

None of the three films in this Rock Hudson Collection is particularly memorable, but as generic entertainment they're passable, and for those interested in the evolution of their star attraction, Hudson at the cusp of the biggest phase of his career, this is Highly Recommended.