Scorpion Releasing // R // December 8, 2020
List Price: $29.95 [Buy now and save at Amazon]
Review by Stuart Galbraith IV | posted January 7, 2021 | E-mail the Author
Trashy but eminently watchable, The Greek Tycoon (1978) is a roman à clef based on shipping magnate Aristotle Onassis and his eventual marriage to Jacqueline Kennedy, widow of American President John F. "Any resemblance to persons living or dead is purely coincidental" is stated the credits, but the filmmakers weren't fooling anybody. Indeed, the movie follows details of the Onassis family story quite closely; even the character names are changed only slightly.

Partly for this reason the film is rather fascinating, but the main impetus to watch it is for star Anthony Quinn, playing the tycoon of the title. Quinn had a long career appearing in many great and very good films - La Strada, Lawrence of Arabia, Zorba the Greek, The Guns of Navarone, Lust for Life, etc. - but it's as if Quinn felt they were all a preamble to The Greek Tycoon, the role of a lifetime. And, in a way, it is. The movie may be nothing much, but Quinn creates an unforgettable character nonetheless, one that helped cement in the mind of many that the Mexican-Irish actor was, in fact, Greek himself. I hadn't seen it since it ran on network television (twice, if I remember correctly) not long after its unspectacular theatrical run, but remembered Quinn's performance vividly.

Undoubtedly Quinn saw a lot of himself in the role. "Theo Tomasis," the renamed Onassis, is larger-than-life, a self-made peasant half-billionaire, uneducated but self-taught and crudely cultured, rough around the edges but irresistible to women, despite his open infidelities and occasional outbursts of violence and misogyny. Quinn's life was equally storied: an artist and civil rights activist as well as an actor-producer, he fathered 12 children from various wives and mistresses, the last when he was past eighty. 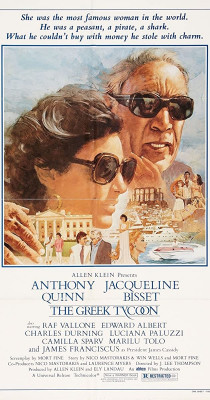 The movie roughly covers a period stretching from about 1960 to 1975, though the costume designs, hair styles, etc. remain firmly stuck in 1977 throughout, when it was made. At a party on his enormous yacht, Greek multi-millionaire Theo Tomasis (Quinn) is immediately attracted to Liz Cassidy/Jackie Kennedy (Jacqueline Bisset), the wife of rising Democratic Senator James Cassidy/John F. Kennedy (James Franciscus), this despite his marriage to Simi/Athina Onassis (Camilla Sparv), already complicated by Theo's longtime and very open affair with opera star Sophia Matalas/Maria Callas (Marilù Tolo). Also present at the party is former British Prime Minister Robert Keith/Winston Churchill (Roland Culver).

Theo and Liz are quickly drawn to one another, though Liz also loves and supports her ambitious husband. After he's assassinated, however, she divorces herself from the powerful Cassidy clan (during brother John Cassidy's/Robert Kennedy's own Presidential campaign) to fly back to Greece and eventually marry the Greek Tycoon.

Meanwhile, Tomasis has his own share of problems, including a troubled relationship with his playboy but honest son, Nico/Alexander (Edward Albert), and a shady brother, Spyros Onassis/Stavros Niarchos (Raf Vallone), who later marries Theo's first wife.

The fine cast, which also includes Charles Durning, Luciana Paluzzi, and others, are good matches for their real-life counterparts but completely overwhelmed by Quinn's presence. Though Jacqueline Bisset is fine in the Jackie Kennedy part, she too plays a distant second-fiddle. A key exemplifying this has Tomasis persuaded to dance with a stranger at a club, Quinn all but reprising his signature Zorba moves. Liz, having initially turned down Theo's offer to dance, quietly grows jealous of the pair on the dance floor, everyone transfixed on this manly-man women find so sensually appealing, his many millions a mere bonus, while all the men look on with awe and admiration.

Quinn was not one for half-measures, in that class of actors who might be considered hammy yet who undeniably committed 100% to every part he played, no matter if the movie was good, bad, or indifferent. Bela Lugosi, oddly enough, was another. There were few others like them.

To its credit, The Greek Tycoon is never dull, playing like a four-hour miniseries cut to the length of a movie running less than two hours. Some characters get shortchanged: the scene where President Cassidy is assassinated has barely begun with Franciscus and Bisset not even speaking before - BAM! - he's shot in the head. That and the location of the assassination (on a lonely beach rather than the heart of Dallas) throws viewers off-guard, though we all saw it coming at some point early in the story.

Director J. Lee Thompson and cinematographer Anthony Richmond infuse the film with appropriately excessive glamour. The reported $6.5 million budget is used well, with enormous yachts with interiors worthy of Ken Adam touring exotic Aegean locations. Wherever they go in their big limousines, Theo and Liz are swarmed by paparazzi and looky-loos.

A Scorpion title The Greek Tycoon was filmed in Technovision, a Panavision-type anamorphic process in vogue during the ‘70s and early ‘80s (Apocalypse Now was another shot in the format). The image is a bit on the soft side, but that seems to be the result more of Richmond's use of gauzy filters than the new 2K transfer. Similarly, some reviews have complained about oversaturated skin tones but that seems to be more the ‘70s fad for deep tans among the leads (particularly Quinn, Bisset, and Franciscus). The DTS-HD Master Audio (mono) is acceptable, and optional English subtitles are provided on this Region "A" disc.

Supplements include a panned-and-scanned trailer in poor condition (not surprising, given this was a Universal release originally) and an audio commentary track featuring Howard S. Berger, Steve Mitchell, and Nathaniel Thompson. Also included is an alternate pre-credits scene not in the theatrical cut, featuring actor Joss Ackland. It's interesting but doesn't add much beyond underscoring Tomasis's dodgy business practices; and alternate end credits, which look better visually than what appear in the main feature. My vague memory suggests these were used when the film was shown on network television.

Trashy but fun, The Greek Tycoon is Recommended.