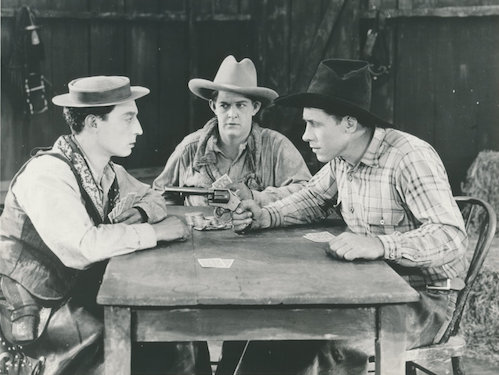 The images accompanying this review are promotional stills which do not reflect the quality of the Blu-ray under review.

The Cineteca di Bologna and Cohen Media Group teamed up a few years ago to restore and re-release all of Buster Keaton's silent films. (One exception: Criterion released the Cineteca's restoration of The Cameraman, Keaton's first film under his infamous contract with MGM.) Cohen has been releasing the full-length films in double-features on Blu-ray in their Buster Keaton Collection. The most recent release, Vol. 4, pairs up the cowboy comedy Go West (1925) and the slapstick sports flick College (1927).

Go West is a little slow-starting, as it tries to figure out a logical reason for its tenderfoot hero to end up on a western ranch. But once he's there, Keaton creates plenty of opportunities for funny small character moments and bigger slapstick setpieces. One memorable gag is focused around his simple misunderstanding of milking a cow -- he sets the bucket under the udders and then uses the stool to stare the cow down, face-to-face, and wait for the milk to come.

Eventually, Buster bonds with a cow called Brown Eyes, and she essentially becomes his pet (or, if you want to go there... love interest). Buster is so sad to see her shipped off to the far-away Los Angeles stockyards that he hitches a ride on the cargo train along with Brown Eyes. This pays off with one of Keaton's funniest extended setpieces, in which Buster and Brown Eyes drive the herd of cattle through the streets -- and shops! -- of downtown L.A.

Not that Go West is the pinnacle of intricate plotting, but College is plainly just a parade of gags and sketches held together by the loosest story points. Buster is a teacher's pet whose high school sweetheart demands he become more interested in sports. He decides to turn over a new leaf in college and throw himself into athletics. Despite absolutely no knowledge of sports, he attempts baseball, track and field, and rowing crew, with predictably disastrous results. Fortunately for Buster, his gal is just happy he's trying.

Buster also tries out a few jobs, to help pay for his college tuition. This includes a position as a soda jerk, where he attempts to get fancy -- like a veritable Tom Cruise in Cocktail -- and fails spectacularly. He also dons blackface to apply for a job as a "colored waiter." Thankfully, the cringe factor is much less in this scene than it could be, since the humor continues to be about Buster's strange decisions rather than exploiting stereotypes.

In the big climax, Buster finds his untapped athletic ability to save his gal from a real cad. The sequence is a little predictable because of how meticulously it has been set up earlier in the film, but for the same reason, it is also quite satisfying.

Go West and College lack the ambition of Keaton's best-loved films, but they both offer enough clever gags and sweet character moments that only a determined grump won't have a good time. 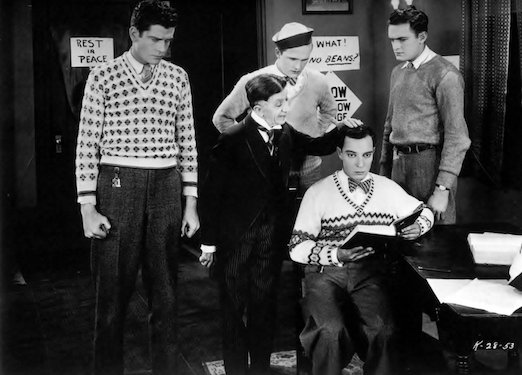 The Video:
Sourced from the Cineteca di Bologna's 4K restoration, these AVC-encoded 1080p 1.33:1 presentations are quite strong, especially considering that these are cobbled together from a number of different first-, second-, and third-generation sources. The image is stable and generally clean. Fine detail fluctuates, but you kind of have to be looking for it to notice the difference. I have not seen the Kino Blu-rays from a decade ago to compare, but many reviewers I trust say that the new Cohen presentations are a notch above those already pretty good restorations.

The Audio:
Both films feature DTS-HD MA 2.0 stereo musical scores. The Go West score is by the Mont Alto Motion Picture Orchestra. The College score is compiled by Rodney Sauer.

(59:19) - A lo-fi audio recording of Keaton talking out an idea that he wanted to pitch as an episode of the show Wagon Train for him to also guest star in. 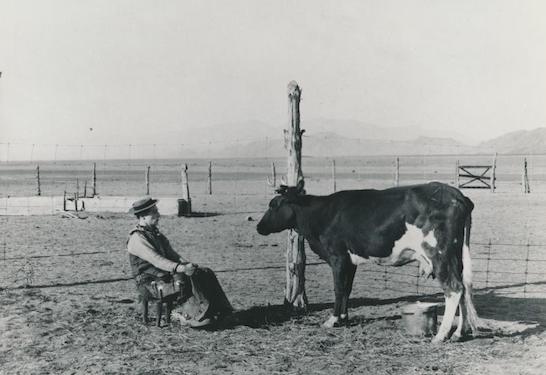