Kiss Before the Mirror, The

Kino // Unrated // February 2, 2021
List Price: $24.95 [Buy now and save at Amazon]
Review by Stuart Galbraith IV | posted January 22, 2021 | E-mail the Author
A decidedly offbeat murder-courtroom drama, The Kiss Before the Mirror (1933) is one of those fiendishly obscure titles presumably chosen for Blu-ray release because of the talent involved. James Whale directed it, sandwiched between two of his horror genre classics, The Old Dark House (1932) and The Invisible Man (1933). Both Walter Pidgeon, very early in his long career, and genre favorite Gloria Stuart appear in the opening scene, while Frank Morgan and Charley Grapewin, both subsequently in The Wizard of Oz, have roles sharply contrasting those signature parts. Celebrated cinematographer Karl Freund gave this pre-Code title a distinctive look, and even Laurel & Hardy favorite Richard Cramer turns up in an amusing bit, as an unrepentant murderer. 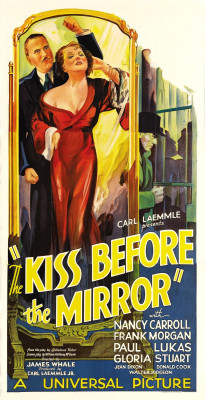 Based on a play by Hungarian writer Ladislas Fodor, the movie, set in present-day Vienna, is sometimes stagey and floridly melodramatic, but at other times cinematic and well-acted. Lucy Bernsdorf (Stuart) is a married woman carrying on a love affair with a handsome man (Pidgeon). At his home, she sits at a vanity (Is he married, too?), preparing to disrobe when her husband, Walter (Paul Lukas), appears at a window. Enraged by her blissful expression in the mirrors' reflections, he shoots her and, after she drops to the floor, fires his pistol twice more.

Longtime friend Paul Held (Morgan), an attorney, rushes to defend him. Walter is inconsolable but describes the rage he felt seeing his wife disrobe and applying makeup before the mirrors. When Paul returns home, he's unnerved by the sight of his own wife, Maria (top-billed Nancy Carroll), doing precisely the same thing. Long suspecting that Maria also has a secret lover, Paul becomes determined to beat Walter's murder rap, and perhaps then kill his own wife as an act of precedented justifiable homicide.

I never knew the old Vienna before the war with its Strauss music, its glamour and easy charm, but it probably didn't look much like this. Except for Austria-Hungary-born Lukas, everyone speaks with standard American accents, and many of the sets look like leftover components from Whale's earlier horror titles. Frank Morgan, not yet settled in playing befuddled, generally lovable middle-aged men, is interesting here, a far cry from his Professor Marvel/Wizard of Oz character; though sometimes melodramatic in the style common to 1920s stage acting, he understands the camera well enough to tone it down for several key scenes and is very good indeed. Grapewin, as his elderly law clerk, sports muttonchop whiskers that makes him look like President Chester A. Arthur and nearly unrecognizable. More interesting is Jean Dixon's lady lawyer, aiding in the case. Possibly but not necessarily a coded lesbian, her cool character contrasts Morgan's hot-blooded one.

The short film, only 69 minutes, is talky some of the time, but Karl Freund's cinematographer livens things up here and there, most interestingly in a slow, 360-degree pan around the courtroom while Morgan's lawyer holds the floor, a camera move replicated years later by director Stanley Kramer and DP Ernest Laszlo in Judgment at Nuremberg (1961).

Licensed from Universal, The Kiss Before the Mirror is presented in its original black-and-white, 1.37:1 standard format with DTS-HD Master Audio mono sound. While not as pristine as Universal's classic horror releases from this same period, the transfer is nevertheless above average. The audio, while clear, had me frequently adjusting the volume, with gunshots and courtroom outbursts overwhelming while, at other times, dialogue is like a whisper. (All things considered, the range with that primitive early sound recording equipment is impressive.) Optional English subtitles are provided on this Region "A" disc.

The lone supplement is an audio commentary track by Alexandra Heller-Nicholas, covering a lot of ground given the film's brief running time.

Not exactly a lost classic but certainly interesting on many levels, The Kiss Before the Mirror is Highly Recommended.