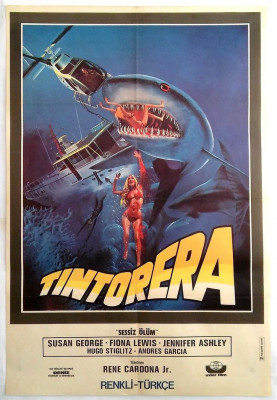 The film's plot and characters are decidedly murky, almost schematic at times. Top-billed Susan George, for instance, doesn't even appear until the movie is almost half over, then she disappears completely for the final 15 minutes or so. The plot summary in Wikipedia describes her character as opting to return to England, so upset is she by all the shark attacks, but in the film I don't recall any explanation of her disappearance at all. Further, Wikipedia's description of the movie's climax is completely different from how Kino/Scorpion's Blu-ray version (unsatisfyingly) ends. In their audio commentary Troy Howarth and Bod Barnett vaguely reference an "alternate ending" that includes the missing material, but offer no explanation as to why it wasn't included here.

Steven (Hugo Stiglitz) is a wealthy American-born Mexican businessman living aboard a giant yacht anchored off the coast of a Mexican resort island. He hires shark hunter Colorado (Roberto Guzmán) to look after his boat and set him up with women, sometimes for group sex. He meets and has sex with Englishwoman Patricia (Fiona Lewis), but when he expresses his growing love for her she leaves him abruptly, preferring the company of suave womanizer Miguel (Andrés Garcia).

At this point the movie becomes a kind of Musical Chairs with Patricia killed by a 19-foot-long tiger shark while skinny-dipping - no one witnesses her death, she just disappears - and another Englishwoman, Gabriella (Susan George), all but takes her place as far as the plot is concerned. Similarly, Steven and Miguel become unlikely friends, the later taking over Colorado's duties as far as procuring women. Steven, Miguel, and Gabriella eventually form a ménages à trois, Steven and Miguel agreeing to share Gabriella, with no strings attached and definitely no love.

Although Tintorera is light on shark attacks, only one of which is particularly gory, Steven and Colorado, and later Steven and Miguel, spend much of their time spearing and brutally clubbing to death dozens of real sharks. Indeed, the body count of real dead sharks by the end of the film is far higher than faked dead humans. Those sensitive to conservation issues will want to proceed with caution.

Steven and Miguel's relationships with Gabriella and other, often nameless women isn't interesting because we learn next to nothing about any of these characters, nor is their interest in shark hunting explained. What does Steve do for a living that he can afford to spend months aboard a huge yacht sleeping, drinking, having sex, and engaging in watersports? Why does he fall in love with Patricia so quickly, but not Gabriella? What's she getting out of her loveless (but lively) relationship with two men at once? What's the point of having Patricia eaten by a shark when nobody notices or even misses her? The film offers few answers.

The casual nudity is startling for viewers expecting a Jaws rip-off. Throughout the picture, beautiful women cavort topless and often bottomless, dancing on Steven yacht, making out with Steven, Miguel, or one another, and most of the swimming in this film is done naked. Steven and Miguel, along with a few other men, are likewise shown sans wardrobe often, stopping just short of full-frontal nudity. Supposedly a tamer version was shot simultaneously for the Mexican market; it's hard to imagine the R-rated version ever making it to free cable without extensive cuts.

By the looks of things, a real, dead shark or maybe a manmade prop pulled by a visible cable is seen in a handful of shots, but mostly the audience sees little more than good underwater photography of real sharks that rarely interact or are in the same frame with the human actors. Ludicrously, when the big shark is around the filmmakers added the sound effects of growly heavy breathing, implying this shark has lungs which, of course, sharks don't have.

Originally released by Hemdale and licensed from MGM, Tintorera Scorpion presents the film in 1.85:1 widescreen, the image generally clean, sharp, and bright with good color. The film retains George's and Lewis's original speaking voices (some versions of the film have them dubbed into "American") while some Spanish dialogue is presented with the original English subtitles used in the theatrical release version, and are not redone for home video. The DTS-HD 2.0 mono is acceptable, and optional English subtitles are provided on this Region "A" encoded disc.

Supplements are limited to the aforementioned audio commentary track, a TV spot, and a trailer.

Interesting as a document of its time (Jaws rip-off, the influence of the Emmanuelle films, etc.), one of that lovers of trashy cinema might enjoy, and for them it's Recommended.