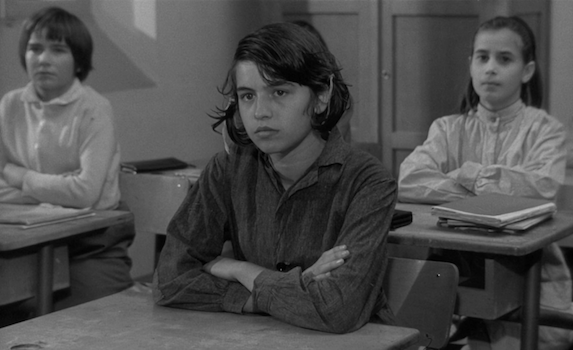 Robert Bresson doesn't waste words, images, or sounds. His 1967 film Mouchette is 81 minutes long. It's poetic, but sparse and without indulgence.

The lead character in Mouchette is played by Nadine Nortier, in her only film role. Bresson mostly worked with nonprofessional actors because they come across more honestly onscreen. Nortier was a few years older than 14-year-old Mouchette at the time, but her looks suggest a girl on the cusp of adulthood.

Bresson eschews a typical approach to scene-setting and character development, forcing viewers to put together the identities of the characters and their connections purely through the way they interact. Mouchette is a poor peasant girl, whose second-hand clothes and greasy hair immediately cast her as an outsider. At home, she is forced into the matriarchal role, since her mom is bedridden with an undefined sickness. Her father and older brother spend all their time focused on their bootlegging business, so Mouchette is forced to care for her unwanted baby brother.

Bresson's film before this, Au hasard Balthazar, followed the doomed life of an innocent donkey, who is maltreated at every turn. Many characterize Mouchette as nearly the same story, but with a young teenager instead of a donkey. Mouchette, however, is not as saintly as Balthazar. She fights back in little ways against the repression of others: she throws mud at a clique of well-dressed classmates, she mumbles insults at those who condescend to her, and, at one point, she indignantly stomps in the mud when she has to go to church. Her father shoves Mouchette into the holy water font as a corrective for that last transgression, which only makes us side with her more.

At the same time, a different conflict is brewing in her village. The old local gamekeeper Mathieu (Jean Vimenet) grows more and more fed up with a younger local poacher, Arsène (Jean-Claude Guilbert), mostly because Arsène has poached the local barmaid that Mathieu had been courting. The whole town, including Mathieu's wife, is aware of the whole debacle. Finally, one night a fed-up Mathieu decides he is going to let Arsène have it.

It is during this night that the two main threads of the film come together. Arsène discovers Mouchette stranded by a rainstorm in the woods and offers to take her somewhere where she can warm up. He starts feeding her a story to use as an alibi for himself, because he thinks he might have killed Mathieu the gamekeeper during their quarrel. Mouchette offers to say anything he likes, because she hates the others anyway. This encounter between Arsène and Mouchette takes up roughly the middle 20 minutes of the film, and Mouchette's character will be profoundly changed by it.

From this scene on, the misfortunes begin to pile on Mouchette. Internally, she seems to think that she might be more of an adult now, but the adult world makes it clear again and again that it doesn't accept her any more than her schoolmates did. It all leads to a famously surprising and ambiguous ending that leads the viewer to wonder whether the cruel world won in the end or whether the victory secretly belongs to Mouchette.

As someone raised on Hollywood storytelling, I admit to often having trouble locking into Bresson's atypical rhythms and the long wordless passages in many of his films. But Nortier's sympathetic performance at the center of Mouchette makes one want to stick with her and try to figure out her world, almost in the same way that she is trying to figure it out. Bresson's craftsmanship is impeccable, and thematically the film is quite rich, but it is Nortier who makes this film connect on an emotional, human level. And if you're only going to act in one film, it might as well be an all-time classic. 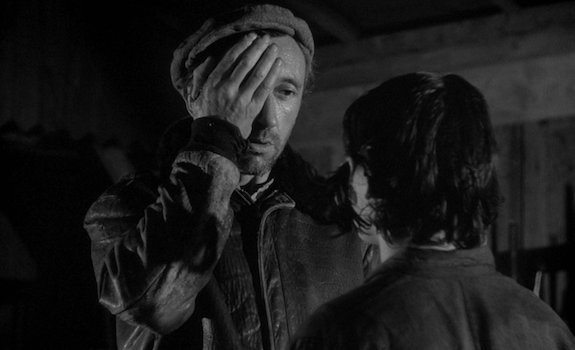 The Blu-ray
This Blu-ray is essentially just an upgrade of Criterion's 2007 DVD. It features the same bonus features and comes with a fold-out featuring an essay by Robert Polito.

The Video:
Sourced from a new 4K restoration, the AVC-encoded 1080p 1.66:1 presentation is quite impressive. Clean and stable, with a satisfying film look. The blacks are particularly rich, but there is strong nuance and detail in darker night time scenes.

The Audio:
The French LPCM mono audio (with optional English subtitles) is excellent, considering how spare the sound design is. There is palpable ambience throughout, even if the film is generally light on effects and music. Dialogue is clean and clear. No noticeable distortion or damage. A bit of surface noise, but nothing that interferes dramatically.

- Sight and Sound critic Rayns offers a thorough and engaging reading of the film, suggesting that while it might be up in the air whether Mouchette is a "Catholic film," it is certainly a film made by a man concerned with sex and death. He also shares details from the source novel by Georges Bernanos that help illuminate both the hidden intentions of certain actions in the film and the places where Bresson has chosen to diverge.

Final Thoughts:
Robert Bresson has been an acquired taste for this viewer. I've always appreciated his fastidious attempts to create works of pure cinema, but they rarely have moved me. This time, Mouchette did the trick. The central performance by Nadine Nortier plays a key part in this, but also Bresson's economy and sparseness do not translate to the "coldness" that a lot of viewers (typically, myself included) detect in his films. This is a potent and emotional film. The Blu-ray upgrade looks and sounds great, and the bonuses genuinely enrich the feature. Highly Recommended. 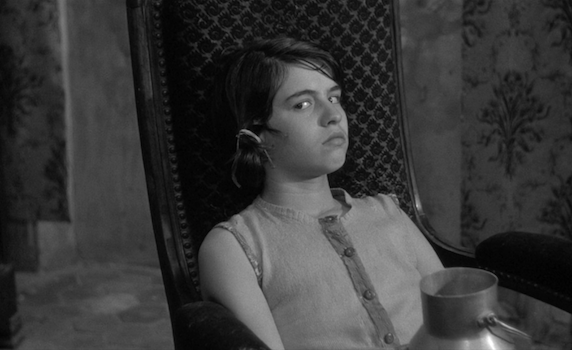