After the awfulness of Texas Across the River (1966) -- You did read that review, didn't you? -- I expected Rough Night in Jericho (1967), another Dean Martin Western also from Universal, to be even worse. Fortunately, it turned out to be much better, if not exactly memorable.

Rough Night in Jericho's single claim to fame is that it's the only movie, Western or otherwise, in which Martin played the villain, though that's not what makes it worth seeing. The singer-comedian-turned-sometimes-serious-actor brings little to the part. He's hardly the revelation here that Henry Fonda was in Sergio Leone's Once Upon a Time in the West (1967), one of the most startling examples of casting against type. Martin's is a stock character in Westerns, particularly B-Westerns from the ‘30s-early-‘50s, and he adds nothing that hundreds of other actors famous and forgotten hadn't done before him. The movie is a bit better than average, but he's not the reason. 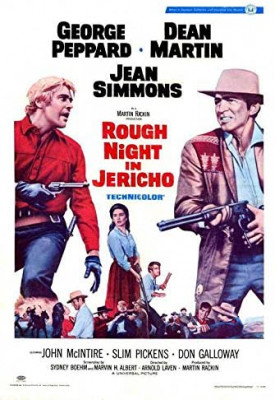 Hickman and his partner, Molly Lang (Jean Simmons), Flood's lover once upon a time, refuse to turn over a controlling percentage of their stagecoach line to Flood, despite intensifying threats of violence. Predictably, Dolan is attracted to Molly but believes she and Ben's conflict is hopeless, that they have little choice but surrender their business to Flood.

The heart of Rough Night in Jericho is the overly familiar but entertainingly done cat-and-mouse game between Dolan and Flood. Flood realizes Dolan is smart and fearless, and that intimidation tactics effective against ordinary townsfolk aren't likely to work on calm, cool Dolan. Instead, Flood adopts that combination of oily charm mixed with subtly-stated threats, for instance allowing Dolan to beat him in a high-stakes poker game then suggesting Dolan do the "smart" thing and use the money to get outta town.

In these scenes Martin is just adequate but Peppard, unexpectedly, is very good. Though he headlined movies throughout the 1960s (and, later, on television). Peppard was never quite a big star, nor was he an exceptionally good actor, but in Rough Night in Jericho he plays all his scenes well, giving the kind of performance that predominantly consists of listening and observing, while the audience tries to figure out what's going on inside his head.

Busy writer-producer-director Arnold Laven was no stranger to Westerns, having created TV's The Rifleman and, later, The Big Valley, and immediately after this directed the underrated Sam Whiskey (1968). Rough Night in Jericho varies from not-bad to pretty good, without ever becoming memorable. For instance, one set piece is a violent fight between Dolan and Yarbrough (Slim Pickens), Flood's chief henchman. With Yarbrough armed with a whip, the fight lasts several minutes and, for a 1967 release, it's fairly brutal. Laven's staging is mostly good and the sequence is tense and exciting. Just not enough so to warrant including it on a highlight reel of great Western movie fight scenes. It does exactly what it's supposed to do, just not to the point where I'm likely to remember it at all six months from now. The entire movie is like this: the cinematography, the musical score, the other performances (especially Simmons), etc., etc. All competent and, taken as a whole, reasonably engaging, but it could have been even better.

Licensed from Universal, Rough Night in Jericho was part of the brief trend at that studio to shoot their features in Techniscope, the 2-perf format that cut down production costs but also resulted in a somewhat grainier image. The transfer is superior to Texas Across the River, also in Techniscope, with a more consistently pleasing image and stronger, more stable color. The DTS-HD Master Audio (mono) is likewise just okay; optional English subtitles are provided for this Region "A" encoded disc.

Supplements consist of a trailer and a new audio commentary by film historian Samm Deighan.

Not great but better than adequate, certainly far better than this reviewer was expecting, Rough Night in Jericho is Recommended.