Texas Across the River

Kino // Unrated // January 5, 2021
List Price: $24.95 [Buy now and save at Amazon]
Review by Stuart Galbraith IV | posted February 2, 2021 | E-mail the Author
A perfectly dreadful Western comedy, Texas Across the River stars actors working at a level well below their abilities, often in ill-suited parts. Top-billed Dean Martin, sometimes very good in the right role, was by this time coasting. Alain Delon, star of a dozen classics of 1960s French cinema, here almost perversely, certainly pointlessly, plays a Spanish nobleman. Rosemary Forsyth, so memorable in the Medieval drama The War Lord (1965), also made at Universal, plays the love interest. Somebody there must have been turned on by her nude bathing in that film, as she all but reprises that same scene here, filmed maybe in the same backlot pool. Even the Kingston Trio's title song is mediocre. 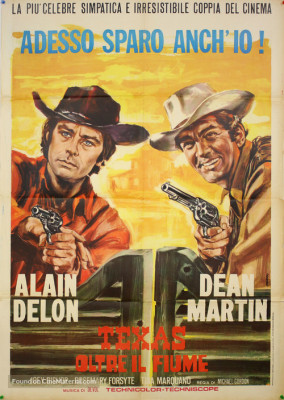 In 1845 Louisiana, Phoebe Ann Naylor (Forsyth) is about to wed Don Andrea Baldazar, El Duce de la Casala (Delon), when longtime purported sweetheart Yancey Cottle (Stuart Anderson), and various cousins all belonging to the same U.S. Dragoons troop, led by Capt. Rodney Stimpson (Peter Graves, with unconvincing Southern accent) put a halt to the proceedings. Yancey is killed accidentally, and Baldazar is wanted for the presumed murder. He flees to Texas, then an independent nation but on the cusp of statehood.

Texas Across the River is usually described as a Western spoof, but what is it supposed to be spoofing? Certainly not the conventions of the Western movie genre. Rather, the screenplay by Wells Root, Harold Greene, and Ben Starr is shapeless, aimlessly lurching along its thin narrative and even thinner characterizations, in scenes that would not be out of place on Martin's variety series, such as the labored comedy of Martin, feigning serious injury, to try to get Forsyth into bed with him. Scenes involving the Comanches, primarily with Michael Ansara and Linden Chiles, but also an unrecognizable Richard Farnsworth as a medicine man, are so broad they resemble the broad slapstick of F Troop. Some reviews consider Joey Bishop's deadpan Indian hilarious, but he's not even trying. For those able to make it all the way through the end, just look at the background extras in the final scenes: even they looked totally disinterested. The action-filled climax is imitative of Zulu (1964).

One suspects one or more of the writers may originally had in mind something slightly more ambitious, perhaps more along the lines of Cowboy (1958), which teamed veteran trail boss Glenn Ford with greenhorn Jack Lemmon, here with Delon playing a spirited but naïve European dandy. Delon, to his credit, tries hard, but his limited English got in the way of his acting in his handful of Hollywood credits; asking him to affect a Spanish accident on top of it was pointless. Why not just make him a French nobleman?

Other than a single interesting, almost funny concept, that the oil bubbling up everywhere is a curse on the land, nothing in the film works. Frank De Vol's very ‘60s score is wildly anachronistic, quoting from American standards like "I've Been Working on the Railroad" for instance, 50 years before it was written. For that matter, railroads were uncommon in 1845.

Director Michael Gordon was slowly rising from the B-movie ranks in the 1940s, from program pictures to several good film noir before peaking with Cyrano de Bergerac (1950) the acclaimed film starring Jose Ferrer. He was blacklisted soon after, returning to films with several hits (Pillow Talk, Portrait in Black) but that resurgence faded quickly with a series of erratic, undistinguished movies like this one. Gordon's direction here is sloppy and uninspired: he exhibits no affinity for the genre and the picture and, visually, his compositions are often pretty ugly.

Licensed from Universal, Texas Across the River was part of the brief trend at that studio to shoot their features in Techniscope, the 2-perf format that cut down production costs but also resulted in a somewhat grainier image. The transfer here is mostly okay but imperfect: the opening titles are a bit wobbly, and minor damage and other imperfections turn up here and there. The DTS-HD Master Audio (mono) is likewise just okay; optional English subtitles are provided for this Region "A" encoded disc.

Supplements consist of a trailer and a new audio commentary by film historian Samm Deighan.

An outlier of Rat Pack cinema, of interest only for Alain Delon's ultimately embarrassing presence in a rare Hollywood production, Texas Across the River sounds intriguing, but the film is quite bad. Rent It.