Kino // Unrated // February 9, 2021
List Price: $29.95 [Buy now and save at Amazon]
Review by Stuart Galbraith IV | posted February 17, 2021 | E-mail the Author
A pair of low-budget but above-average Anthony Quinn Westerns made independently for release through United Artists, both Man from Del Rio (1956) and The Ride Back (1957) are unusual and interesting throughout. 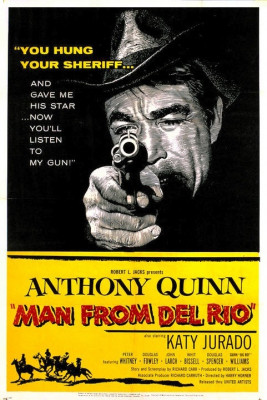 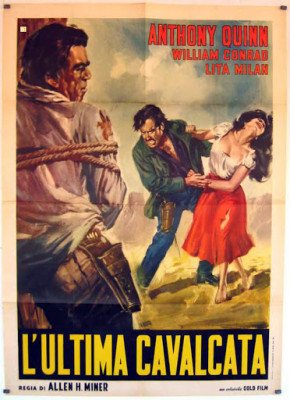 Man from Del Rio has a strong opening. Quick-draw gunfighter Dan Ritchy (Barry Atwater, uncredited) rides into the town of Mesa, greeted at the saloon by Hispanic peasant Dave Robles (Quinn), who almost meekly challenges him to a gunfight. Ritchy, Robles explains, was one of a band of outlaws that terrorized his village five years ago and he's spent that time learning to shoot. Ritchy can scarcely believe such a low-life would challenge him, but in the extremely well-staged, lightning-fast confrontation Robles shoots Ritchy dead, the Mexican merely grazed by Ritchy's bullet.

At the office of Doc Adams (Douglas Fowley), Robles is attracted to the sawbones's assistant, beautiful Estella (Katy Jurado), but she wants nothing to do with him. Meanwhile, former gunfighter-saloon owner Ed Bannister (Peter Whitney), impressed by Robles's gun, offers to hire him.

That same afternoon a trio of raucous outlaws ride into town, including Bill Dawson (John Larch) and Fred Jasper (Guinn "Big Boy" Williams). They get drunk with Robles, welcoming him as one of their own, but later the trio sadistically taunt Mesa's cowardly sheriff (Douglas Spencer), threatening to lynch him. Robles, appalled, guns them down, too, and when the sheriff has a nervous breakdown following that public humiliation, the townsfolk appoint Robles as his replacement, he anxious to stay in hopes of wooing Estella.

The film is a good vehicle for Quinn while turning genre conventions on their head. The people of Mesa need Robles's gunfighting skills but privately hold this illiterate peasant in contempt. When he shows up at a town party, everyone treats him rudely and unwelcomingly, driving him outside like a smelly dog. Estella, invited but at a disadvantage as a Latina, sides with the cruel townsfolk. Outside, Robles gets drunk with seemingly his only friend, Breezy Morgan (Whit Bissell), the local rummy. (Bissell is good in an atypical role.)

Though a bit actorly in his speech and mannerisms, Quinn was generally good playing this type of uneducated, bottom-rung illiterate, shy and childlike at times while contrastingly bold and over-confident at others, and almost always self-destructively stubborn. Estella likens him to a snake set loose in a house full of rats; once the rats are dead, no one wants the snake around anymore, but Robles can't reconcile this. A long sequence has him preening over his new wardrobe now that he's sheriff, attracted to the glamor of it and unaware the people of Mesa want only the gun, not the man.

The movie surprises here and there, including its climatic front street gunfight between Robles, saddled at this point with a broken wrist, and Bannister. How it ends is perhaps unique in the Western genre.

Though one might reasonably assume The Ride Back is a low-budget imitator of 3:10 to Yuma, in fact it predates that Western classic by more than three months and its similarities are coincidental. Though it would be easy to overstate its qualities, this is an exceptionally good small-scale film built around two characters and only four other supporting parts of any note.

Gambler-gunfighter Bob Kallen (Quinn), a Mexican-American, flees across the border after killing two men. He's wanted for murder though Kallen claims self-defense. Deputy (not sheriff, as claimed in some sources) Chris Hamish (William Conrad) rides alone to bring him back, making his way to a small village in Mexico where Kallen is holed up with his lover, Elena (Lita Milan), cousin of the local priest, Father Ignatius (Victor Millan). Though outmatched, Hamish disarms Kallen without incident and the two begin riding back toward the U.S. border. Along the way, they are stalked by a band of Apache warriors and also contend with Elena's determination to follow them on foot.

The movie operates under an interesting premise, as a character study that gradually reveals that Kallen, who may or may not be guilty, nonetheless has all the qualities Hamish yearns for but does not possess. Hamish is a brooding loner, unaided and alone, while the villagers stand ready to kill the lawman to protect Kallen. Hamish's wife hates him while Elena risks her life traipsing across the desert just to be with her lover. Hamish is childless after his wife becomes barren, but a little girl (Ellen Hope Monroe) orphaned in an Apache raid bonds with the outlaw instead, not the lawman.

The film was a production of director Robert Aldrich's The Associates & Aldrich Company, and produced by co-star William Conrad. Though busy in films as a character actor, Conrad at this time was best known as the star of the radio version of Gunsmoke (1952-61) as Dodge City Marshal Matt Dillon. Though his acting was widely acclaimed in this celebrated series, the last huge hit of radio drama, when it was adapted for television in 1955, Conrad was passed over for the lead, deemed too short and (especially) too fat. Yet in The Ride Back Conrad is about as thin as he ever was and the movie plays like a repudiation of that rejection. Further, some sources claim the movie was adapted from a Gunsmoke radio script, but while writer Antony Ellis did later pen four episodes of the Gunsmoke TV series, this seems unlikely. For one thing, Gunsmoke often featured stories about Dillon escorting prisoners back to Dodge or somewhere else to stand trial. (For readers ambivalent about the TV Gunsmoke I recommend the somewhat similar 1962 episode "Gallows," an episode as good as the greatest movie Westerns ever made.) In any case, Conrad is so good and, because the movie is really about this character, Quinn almost fades into the background. It's Conrad one watches in every scene.

Allen H. Miner is the credited director, but reportedly Oscar Rudolph replaced him for 10 shooting days. Given that the entire picture was probably shot in 20 days or less that would be a significant contribution. Regardless, much of The Ride Back is shot with more imagination than other films at this budget level. Joseph F. Biroc's black-and-white lensing cleverly shoots Conrad at low angles at the beginning of the film, often with brilliant images of clouds behind him, emphasizing his position of authority and power, yet by the end of the picture it's mostly looking down at him and angling up toward Quinn. The blocking of the actors throughout further suggests everyone involved with The Ride Back worked together to make something a little better than the average low-budget Western.

Little touches throughout exemplify this. Unusual for a Hollywood film from this period, much of the dialogue is in untranslated Spanish, long conversations between Kallen and Elena, Kallen and the priest, etc., that Hamish can't quite follow, putting him (and the movie audience) at a disadvantage. Particularly good are two long scenes with Hamish and a Mexican border Guard (Jorge Trevino), whose English is minimal. Despite the well-worn plot, the screenplay has one startling surprise I won't reveal here. And, unexpectedly, actor Eddie Albert sings the title song.

Kino's Blu-ray presents both films, each running less than 90 minutes, on a single Blu-ray disc, via new video masters from MGM. Both are in black-and-white and in their original widescreen aspect ratios and look solid, with strong blacks and much detail. The DTS-HD Master Audio (mono) is fine and optional English subtitles are offered on this region "A" encoded disc.

Surprisingly, the only extras offered are trailers for each picture.

Small-scale and low-key, both films are unexpectedly good and the disc comes Highly Recommended, especially for Western film fans.