Pain in the Ass, A

Kino // Unrated // March 30, 2021
List Price: $24.95 [Buy now and save at Amazon]
Review by Stuart Galbraith IV | posted February 19, 2021 | E-mail the Author
A Pain in the Ass (L'emmerdeur, "The Troublemaker," 1973) is a very funny French comedy built around a premise as old as the movies, though rarely done this well: a character with a pressing engagement encounters a well-meaning stranger whose actions foul everything up spectacularly. Another recent Kino release, Clockwise (1985) with John Cleese, builds from the same idea, and A Pain in the Ass itself has been remade multiple times, none remotely as good as the original.

The best-known of the remakes is Buddy Buddy (1981), the last film of director Billy Wilder. Wilder himself disowned the film, and despite the presence of two big stars, Jack Lemmon and Walter Matthau, it's hard to come by on DVD and yet to be released to Blu-ray. I've never seen it, but watching A Pain in the Ass some of the reasons for its failure are immediately clear. 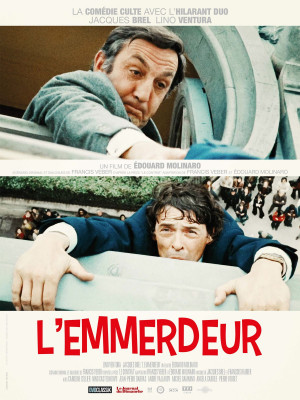 The film opens like a straight crime thriller. The car of Louis Randoni (Xavier Depraz) is blocking a neighbor's garage access, and when the building manager tries to move the vehicle, a bomb planted inside explodes, instantly killing the manager. Later, the would-be assassin is himself murdered for failing to eliminate Randoni, the key witness is a high-profile criminal trial.

Contract killer Milan (Lino Ventura) is flown in to finish the job. He moves into a hotel suite across the street from the heavily fortified courthouse, intending to eliminate Randoni with a sniper's high-powered rifle. However, shirt salesman François Pignon (Jacques Brel) has moved into the suite next-door and, despondent over his crumbling marriage, attempts suicide by hanging himself in the bathroom. But the pipe Pignon has tied his rope to breaks, causing a minor flood with water seeping into Milan's suite also. Keeping his cool, Milan talks a concerned bellhop (Nino Castelnuovo, Catherine Deneuve's lover in The Umbrellas of Cherbourg) out of reporting Pignon's suicide attempt to the police, per hotel policy, but that also forces Milan into consoling inconsolable Pignon, who threatens to try again unless Milan can help him get in touch with Louise (Caroline Cellier), Pignon's wife.

Édouard Molinaro (La Cage aux Folles) directed, from a screenplay by Francis Veber, based on his play Le contrat ("The Contract"). The main reason the movie works so well are the lead performances of Lino Ventura and Jacques Brel, and how their characters are written. Ventura was something of a French Humphrey Bogart, specializing in gangster and police detective parts. Like Clint Eastwood, he capitalized on a less-is-more approach to his acting, commanding the screen by saying very little. The character of Milan is like one from any number of Ventura's films, and he plays it absolutely straight. As the problems and obstacles Pignon creates get worse and more ridiculous, Milan tries to remain focused on the task at hand, the opening scenes establishing that, should he fail, Milan will undoubtedly be "eliminated" as well. However, Milan's growing exasperation gradually giving way to desperation becomes increasingly hilarious.

Iconic Belgian singer Brel has the more difficult part because a) Pignon is genuinely mentally disturbed and b) intensely annoying yet c) must not be entirely unlikeable or unsympathetic. Just as the movie audience feels sorry for A Pain in the Ass's contract killer, almost rooting for him to succeed by the end, it understands why Milan doesn't simply do away with the annoying basket case next-door.

The obstacles Veber's script throw at Milan press the boundaries of believability without ever crossing over into the absurd. For instance, near the end, when Milan is many kilometers from the hotel with but minutes to go before Randoni's scheduled arrival in court, Milan hitches a ride, handing a big wad of cash to the driver if he can get him back there in five minutes. The driver (Éric Vasberg), it turns out, is a professional stock car driver, and obligingly floors it. Milan, not expecting this, is unprepared for the driver's racecar-like speed, and Ventura's reactions are hilarious. And, to Veber's credit, the climax had this writer guessing, with no idea how it was going to end.

Even without ever seeing it, it's easy to see why Wilder's Buddy Buddy was doomed from the start. Though he played similar parts early in his career, Walter Matthau is all wrong cast as the contract killer. That part should have been played by Charles Bronson, his screen persona long established playing similarly poker-faced and no-nonsense bad and good guys like Ventura. Jack Lemmon would at first seem like a good fit in Brel's part, Lemmon having already played the suicidal Felix Unger during the breakup of his marriage in The Odd Couple, but the Pignon character also requires qualities Lemmon wasn't really up to (not even, for that matter, in The Odd Couple): clinical neuroses and the ability to straddle that fine line between being sympathetic and intensely annoying.

(In his defense, contrary to what one might have expected, Wilder did not cast Matthau and Lemmon. Rather, they came to him with the project, their parts already set.)

Buddy Buddy apparently follows A Pain in the Ass fairly closely though Wilder and longtime collaborator I.A.L. Diamond did change the very end of their film, not for the better, but in recognition that the French film's final moments don't entirely work, either.

Licensed from Universal, A Pain in the Ass is presented in its original 1.66:1 widescreen and looks splendid throughout, with near-perfect color, contrast, and impressive sharpness in this new 2K transfer. The optional English subtitles are good, as is the DTS-HD Master Audio (mono) on this Region "A" title.

The light supplements consist of an audio commentary by critic Nick Pinkerton and an original trailer.

Almost perfectly executed and highlighted by two outstanding performances, A Pain in the Ass is a classic French comedy and a DVD Talk Collectors Series title.