There's no sled in this Rosebud, which is not to say the movie isn't tough sledding. A kidnapping-political thriller, Rosebud was the penultimate film of director Otto Preminger. Considering how it came out, one is surprised he was entrusted to make another one. It's a very strange picture, at once both slick and globe-trotting yet also incredibly shoddy. It features both established and up-and-coming actors of note, but has no good performances, though star Peter O'Toole is interesting to watch. The direction is almost amateurish at times, yet in other ways it exhibits some intelligence.

Most bizarre is the film's structure. Both O'Toole and Richard Attenborough get above-the-title billing, but O'Toole doesn't appear until nearly 30 minutes into the film, and Attenborough's first appearance comes nearly an hour later, the first of two brief scenes totaling maybe five of the film's 125 minutes. Others prominently billed in the cast, like Peter Lawford and Raf Vallone, have tiny roles, little more than extended cameos.

Instead, the film is dominated by non-native English-speaking actors (and, clearly, some non-actors) struggling with the all-English script, even in scenes where Palestinians are alone in a room with other Palestinians or French people are alone with other French people, talking amongst themselves. Some of these players are clearly struggling, reading lines phonetically, others had to be dubbed in post-production. Director Preminger was no help; at times it's hard to tell apart the experienced actors from the non-actors. 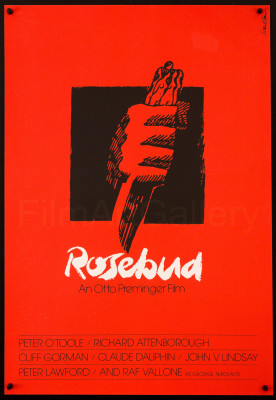 The first half-hour of Rosebud details the kidnapping by Palestinian Liberation Army terrorists of five teenage girls, all daughters of wealthy industrialists or influential politicians, aboard the Rosebud, a yacht owned by one of the fathers, Charles-Andre Fargeau (Claude Dauphin). Nearly 30 minutes into the story, a British correspondent of Newsweek, breezy Larry Martin (O'Toole), actually a CIA operative, is prevailed upon to rescue the girls.

The girls, meanwhile, have been hidden in a remote village in Corsica, forced to appear in films reading the from scripts the demands of their kidnappers. Besides rescuing the kidnap victims, clues lead Martin to elusive head of Black September, Edward Sloat (Attenborough), holed up in a cave like Osama Bin-Laden. (I never did figure out how this WASP-y Brit became a radical Muslim. Attenborough's incredibly pale calves seemed especially out of place.)

Rosebud is leisurely paced and short on action, but not without interest, and was timely as hell. Sloat is connected to the recent and real-life assassination of Jordian Prime Minster Wasfi Tal and the massacre of Israeli athletes at the 1972 Munich Olympics. Overall, the movie plays like a much less interesting Raid on Entebbe, though details of how the kidnappers work is intriguing, such as moving one blindfolded hostage by a small plane that never actually leaves the ground, or in another scene driven around in endless circles to disorient her.

Preminger himself narrates the movie's trailer, referring to the kidnap victims, with his thick, signature Austro-Hungarian accent, as "five new stars." And he wasn't entirely wrong: one is played by Isabelle Huppert, another by Kim Cattrall. (Lalla Ward was a regular for a time on Doctor Who; Debra Berger was the daughter of actor William Berger; Brigitte Ariel starred in Edith Piaf: The Early Years.) Huppert has the biggest role, but baby-faced and barely 21, there's little hint of the great actress to come.

None of the performances are very good. O'Toole was, apparently, a last-minute replacement for Robert Mitchum, who didn't get along with infamous screamer Preminger, but O'Toole just sort of wafts through the film with his signature charm, as if unaware of the grim nature of the international crisis the PLA has created. Rarely does one get the sense that he's taking any of this seriously. But it's a delightful show he puts on, nonetheless: in one scene he and Israeli colleague Yafet Hamlekh (Cliff Gorman, of the underrated Cops and Robbers) need seats on a fully-booked flight, and O'Toole effortlessly charms two tickets from two older ladies like a genial movie star, or maybe the pickpocket at the beginning of Casablanca.

Like Preminger's bloated, oversoaked Exodus (1960), it presents a completely one-sided take of the Israeli-Palestinian conflict, but otherwise is more realistic and complex than that earlier triumph. But the frequent shoddiness of the production keeps getting in the way, like the frequently awful, distracting musical score.

Preminger was perhaps the most erratic filmmaker in Hollywood history. He began with several excellent film noir (most famously Laura) then spent much of the 1950s pushing the boundaries of film censorship making films breaking longtime taboos (The Man with the Golden Arm, the all-black musical Carmen Jones, Anatomy of a Murder). Directorial signatures (his use of title artist Saul Bass, his penchant for offbeat casting) served him well much of the time, and his movies were always unusual up to Bunny Lake Is Missing (1965), his best film being Advise and Consent (1962), an ensemble political drama. Beginning with Hurry Sundown (1967) Preminger seemed lost. Skiddo (1968) is so awful and misbegotten it fascinates, though his small-scale Such Good Friends (1971) is pretty good. Son Erik Lee Preminger wrote the script for Rosebud. He did not write another.

Licensed from MGM, Rosebud, filmed in Panavision, features what's billed as a 2K restoration, though the image is just okay at best, grainy with rather blotchy, dull color, though the trailer, also included, looks no better. It may have always been an ugly-looking movie. The DTS-HD Master Audio (mono) is likewise acceptable but no more than that. Optional English subtitles are provided on this Region "A" encoded disc.

In addition to the trailer, the other extra is a new audio commentary track by filmmaker/historian Daniel Kremer. The track is informative and Kremer clearly knows his stuff, but his halting delivery -- he says "Um, and ahhh" about 300 times -- that it becomes distracting. Given Kino's one-take approach to recording its tracks (I'm told), this is not at all surprising and not really Kremer's fault, but more rehearsal and/or judicious editing would make such tracks more pleasurable to listen to.

Not quite as terrible as its reputation but still something of a train wreck, Rosebud will interest fans of outré cinema but those with more mainstream tastes will want to avoid it. Recommended.