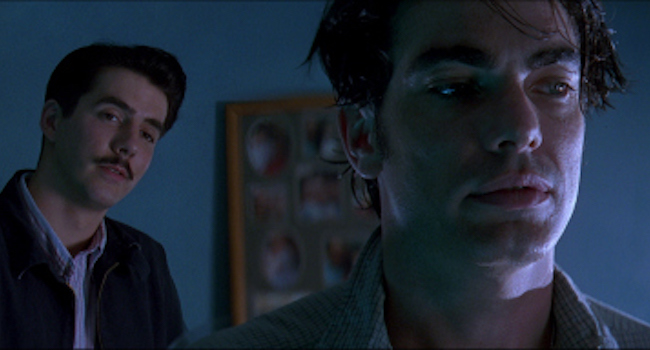 I will admit, it takes a little while for The Underneath to start firing on all cylinders. Released in 1995, the film is a remake of the 1948 film noir Criss Cross from writer-director Steven Soderbergh. Soderbergh has never been happy with the film -- he had his script credit replaced with "Sam Lowry," the main character from Brazil -- and, watching The Underneath, one can feel the filmmaker fighting with himself.

Many stylistic ideas on display here -- the achronological story structure, the aggressive use of color gels, and the selection of different film stocks to help distinguish different time periods -- would reappear in later films to better effect. Here, one feels Soderbergh is looking for an eye-grabbing analogue to the high-contrast expressionism of the original noir films, but he doesn't always find it. For example, the heavy use of split-diopter shots early on -- rendering every person in a frame in sharp focus, whether they are positioned close to the camera or farther away -- draws focus (ha ha) to the technical feat rather than illustrating any sort of psychological aspect of the characters.

sex, lies, and videotape's Peter Gallagher stars as Michael Chambers, a prodigal son who returns to Austin, Texas, when his fiftysomething mother (Anjanette Comers) announces her impending marriage to a sweet fella, Ed (Paul Dooley). Ed puts in a good word for Michael to join him on the job as an armored truck driver, and maybe it's a sign that Michael is turning his life around...

Michael can't stop thinking about his old flame, Rachel (Alison Elliott), or about the way he mistreated her when they were together. Michael is a gambling addict who blew the couple's nest egg on football and split town to avoid angry bookies. It's no surprise, then, that she doesn't roll out the red carpet for Michael's return. Plus, Rachel's new boyfriend, Tommy Dundee (William Fichtner), is a crooked bar owner with a fondness for violence.

The Underneath holds pretty faithfully to the noir playbook, as Michael ends up throwing in with Tommy and concocting a scheme to rob the armored car, in the hopes that he and Rachel will keep the cash and run away from Tommy and all the rest. It's really in the closing third of the film -- the hold-up and its aftermath -- that The Underneath pleasantly wanders into uncharted territory, as Michael is left drugged-up in a hospital bed, unsure if the people talking to him are real or not. That uncertain dream quality carries all the way through to the end credits, as the final puzzle piece falls into place. The film has a few twists up its sleeve -- some expected* and at least one which is satisfyingly left-field.

Compared to what Soderbergh would pull off with his Elmore Leonard adaptation Out of Sight a few years later, The Underneath feels like a half-realized dry run. There are a lot of elements to enjoy -- including welcome appearances by the likes of Joe Don Baker, Shelley Duvall, Twin Peaks' Harry Goaz, Elisabeth Shue, and Adam Trese as Michael's suspicious brother. Soderbergh just hadn't quite cracked how to execute his offbeat stylistic ideas in a way that felt consistently organic and emotionally honest. It's still an entertaining attempt.

*After all, both Don Tracy's source novel and the original film were called Criss Cross.

The Video:
The Underneath made its Region A debut as a bonus feature on Criterion's King of the Hill release. I don't have that disc on-hand to make a comparison, but I would not be surprised if this AVC-encoded 1080p 2.35:1 presentation is sourced from the same master. If so, the edge goes to this version because here the film is allowed to fill up a BD-50 disc on its own, with a generous encode bitrate. Elliott Davis's cinematography, with its range of color palettes and different film stocks, is well-preserved here. No noticeable damage or dirt, but it doesn't look too scrubbed clean and antiseptic either.

The Audio:
The disc offers both a DTS-HD MA 5.1 surround option and a DTS-HD MA 2.0 stereo option. Even if it's not flashy in a typical way, Soderbergh is always pretty intentional with his sound design. The surround option is notably more immersive, and the scattered musical performances by local Austin bands -- including Cowboy Mouth, glimpsed before their song "Jenny Says" became an alt-radio hit -- have a beefy live sound. An English SDH track is the sole subtitle option.

- Critic and scholar Tonguette offers a defense of this often-dismissed film by taking a look at its place in director Steven Soderbergh's career. There are long stretches where Tonguette does not reference the onscreen action, which can be mildly frustrating... but it's a worthwhile listen overall.

Final Thoughts:
Steven Soderbergh has already stated his distaste for this quirky neo-noir from early in his career, but he managed to make an entertaining movie despite himself. The A/V specs on this release are excellent, so if you haven't already snagged Criterion's King of the Hill (which slots this in as the B-picture on an unbilled double feature), this disc comes Recommended.