Jazz on a Summer\'s Day

As a casual fan of jazz but no expert, I figured the concert movie Jazz on a Summer's Day (1959) would be good but it far exceeded my expectations. Directed by famous commercial photographer Bert Stern and editor Aram Avakian (known for his collaborations with director Arthur Penn), it's a visual and, especially, aural feast. Much of the film, sometimes too much of the film, turns its cameras away from the performers to focus on myriad other things - spectators and water, mainly - but this approach works for the most part. Louis Armstrong and, somewhat incongruously, Chuck Berry and Mahalia Jackson are the star attractions but many lesser-known performers, especially featured performers in headliner acts, are just as fascinating to watch and to listen to, sometimes more so.

The film, shot in Eastman color and 1.37:1 standard format and released here in DTS-HD 2.0 stereo surround, is among the best-sounding concert films of the pre-Dolby era. Rather than conventional stage microphones, studio-grade mikes and magnetic recording equipment were utilized and that, obviously, made all the difference in the world. 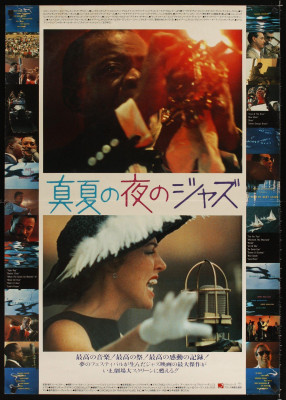 The movie is composed of highlights from the 1958 Newport Jazz Festival in Rhode Island. In the relatively short (82-minute) film, most performers get to do one complete number, but a few are allowed more screentime than that. During the performances, the camera often cuts away from the artists to focus on audience members dancing, eating ice cream, smoking pipes, making out, etc., with surprisingly few quietly contemplating the music onstage. The movie also cuts away to endless shots of water: beaches where other musicians jam, for instance, and there's lots of footage of that year's America's Cup yacht race. But a lot of this water footage is abstractly presented, sort of grooving in-synch with the music, and this reminds one of Norman McLaren experimental animated shorts like Begone Dull Care (1949) that attempted to visualize jazz.

As a casual fan, I found myself drawn to names I was less familiar or artists I frequently listened to but had never actually seen before. During Louis Armstrong's set, for instance, I was fascinated less by Satchmo than his longtime collaborator, the great trombonist Jack Teagarden. Footage of Armstrong is everywhere, but I don't ever recall seeing such rich footage of him interacting with Teagarden before. And while I sometimes listen to Anita O'Day I had only the vaguest idea what she looked like. The movie offers great performances by her, "Sweet Georgia Brown" and "Tea for Two"; only later did I learn that, reportedly, she was high on heroin at the time, unaware even that she was being filmed.

Thelonious Monk is predictably great, but I was also bowled over by jazz drummer Chico Hamilton and especially jazz flautist Eric Dolphy, a performer previously unknown to this writer. Jimmy Giuffre, George Shearing, Dinah Washington, and Big Maybelle also perform. Chuck Berry is unexpectedly subdued performing his one song, "Sweet Little Sixteen," though the audience seems to enjoy it. Louis Armstrong is fine in his segment though he seems a bit on master showman auto-pilot. Gospel icon Mahalia Jackson would seem an odd choice to close out the festival, but in the movie her three numbers come off as oddly appropriate.

Movies like this also work as great time capsules; this would make a great double-bill with America As Seen by a Frenchman (1960). As in that film, Jazz on a Summer's Day captures far more accurately than any Hollywood film the everyday musings of ordinary people - white and African-American alike - of a specific time and place, gone forever yet still recognizable.

Jazz on a Summer's Day looks great on Blu-ray, especially when one realizes both the sound and picture elements available for this 4K restoration were less than ideal, reportedly an interpositive, internegative, and quarter-inch magnetic tape. Yet the images and audio really pop throughout, with bright primary colors and robust stereo surround. Optional English subtitles are provided on this Region "A" encoded disc.

Supplements abound, including an entire second feature documentary in high-def, Bert Stern: Original Madman, a 2011 documentary by Shannah Laumeister Stern, Bert's wife, filmed not long before the photographer's death. Also included are photo galleries, an audio commentary by music journalist Natalie Weiner, a trailer and a booklet essay by Nate Chinen, author of Playing Changes: Jazz for the New Century.