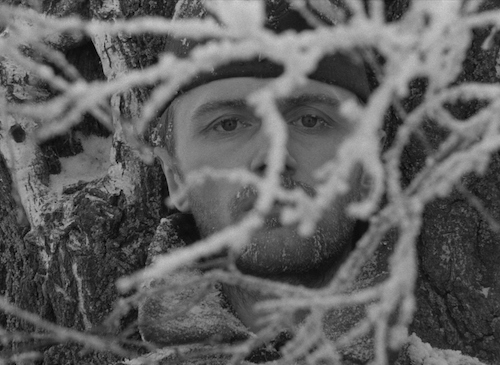 There are two films I've seen critics cite in reference to Larisa Shepitko's 1977 film The Ascent, and I can't resist mentioning them too. The first is Elem Klimov's Come and See, which is another harrowing World War II film that examines Soviet hardships and Nazi cruelty. (Klimov was also Shepitko's spouse.) The second is Carl Theodor Dreyer's The Passion of Joan of Arc, which is another film that uses expressive close-ups to represent existential anguish and spiritual transcendence.

These references suggest the style of The Ascent somewhat but don't quite capture Shepitko's masterful synthesis of realistic brutality and ravishing aesthetic beauty. The black-and-white cinematography by Vladimir Chukhnov and Pavel Lebeshev alternately echoes combat newsreels and fussed-over art photography. But even at its most emotionally wrought, The Ascent never comes off as inauthentic or sentimental.

At its core, The Ascent is about how the characters' choices define who they are and essentially determine the true nature of strength. In the beginning, we are thrown into the plight of a traveling band of Soviet partisans and their families. Freezing in the bitter winter cold and almost out of food, this group is suffering terribly. Rybak (Vladimir Gostyukhin) is charged with gathering provisions; Sotnikov (Boris Plotnikov) volunteers to go with him. The mismatch is immediately apparent: Rybak is a fisherman, tough and earthy, seemingly a natural fit for the life of a partisan; Sotnikov is a teacher, quick-witted but unable to keep pace with Rybak, and his persistent cough suggests that he is too sick and weak to undertake the task at hand.

And their mission is not an easy one. The farm where they seek sustenance is ransacked and vacated. The pair resort to taking a single sheep from a village elder (Sergey Yakovlev) who has collaborated with the Nazis. They are tracked and attacked by soldiers before they can get back to their group. Sotnikov shoots a German, but is himself injured. He resolves to commit suicide, but Rybak refuses to let him either pull the trigger or be captured in this fight. They are finally found hiding in the home of a single mother, Demchikha (Lyudmila Polyakova), who, despite her innocence, is taken in with Rybak and Sotnikov as a Red Army conspirator.

Anatoly Solonitsyn, the star of Tarkovsky's Andrei Rublev, plays Portnov, the interrogator who unwittingly reveals the true nature of Rybak and Sotnikov. The physically weak teacher shows exemplary moral strength in the face of Portnov's goading and eventual torture. In contrast, the adept soldier and fisherman, haunted by speculative visions of being shot in the back while attempting escape, willingly gives up tactical information about his partisan group in the hope of saving his skin. Rybak blanches slightly at the idea of becoming a member of the German police, like Portnov, but he doesn't rule it out.

In the way that Shepitko has the camera frame Sotnikov's face as he endures his torture and ponders his fate, the viewer can't help but see him as Jesus. Rybak becomes Judas, and Portnov the interrogator, horrified at Sotnikov's refusal to succumb to his tactics, is a version of Pontius Pilate. Although Shepitko reportedly wasn't religious, she uses this archetypal imagery to add a metaphysical aspect to the plight of her characters. Also, knowing the Biblical story adds a damning irony to Rybak's fate, which is arguably worse than Judas'.

I've read reviews that argue back and forth about whether Shepitko's The Ascent or Klimov's Come and See is the more shattering take on the cruelty and ugliness of war. They both pack a tremendous wallop. However, there's something more evocative and less blunt about Shepitko's approach that, while it doesn't lessen the impact of the events depicted, allows viewers to process the film's images emotionally and intellectually as they unfold. Come and See punches you in the kidneys and leaves you gasping for air. The Ascent uses all the tools of cinema to seep into your mind and body and overtake you. In both cases, you will be profoundly changed. 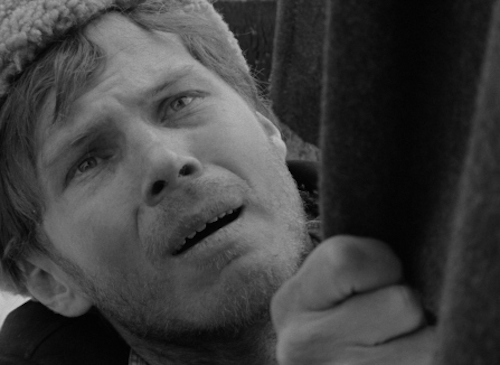 The Blu-ray
The Ascent is packaged with an insert featuring an essay by poet Fanny Howe.

The Video:
Restored in 4K by Mosfilm, The Ascent's visuals translate perfectly in this AVC-encoded 1080p 1.37:1 presentation. Criterion's original DVD release of this film was as the eleventh volume of their Eclipse series. The initial premise of that sub-label was content over quality, so this HD upgrade represents a marked visual improvement for the film, with sharp detail, nuanced contrast, and little noticeable film damage.

The Audio:
As with the visuals, the restored Russian LPCM mono audio (with optional English subtitles) reveals unexpected depth and richness, especially in the quieter and more sparsely ambient moments. The louder effects and Alfred Schnittke's musical score are also well-supported in the mix.

Special Features:
Apart from the commentary, the supplements are in Russian with optional English subtitles.


Final Thoughts:
A powerful, shattering movie. An impressive A/V upgrade. A wealth of informative supplements (not to mention the excellent short film, The Homeland of Electricity). For arthouse fans, this is a must-own. DVD Talk Collector Series. 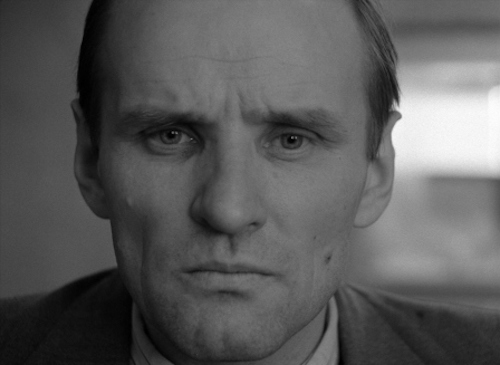