Some movies just rub you the wrong way. That was my reaction to Battle Hymn (1957), a Douglas Sirk-directed war drama starring Rock Hudson, the same combo behind Magnificent Obsession (1954), All That Heaven Allows (1955), Written on the Wind (1956), and The Tarnished Angels (1957), all exceptional films. Battle Hymn, however, turned me off almost from the start. It contains Sirkian elements common to those other films but this comes off as exceptionally phony throughout. Set mostly during the Korean War, it's a paint-by-numbers emblematic ‘50s Hollywood movie: part-Armed Forces recruiting film, part-religious, God-is-on-our-side film, with dashes of doomed interracial (i.e., Asian-Caucasian) romance and a vague anticommunist air, though that's more an after-effect.

I recently re-watched a coincidentally similar film, Three Stripes in the Sun (1955) a much lower-budgeted Columbia offering that, in some respects, has an almost identical story. That film is sentimental but unpretentious and emotionally truthful in ways Battle Hymn never once approaches. 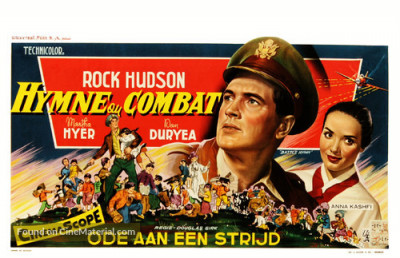 Not uncommon to movies from this period, Battle Hymn opens with a long, dry onscreen introduction by Gen. Earle E. Partridge. He's such a stiff and his introduction so boring, he makes Dr. Frank C. Baxter intro to Universal's The Mole People the previous year seem like a highlight of TED Talk. Dean "Killer" Hess (Hudson) is a fearless bomber pilot in World War II. Another flyer, Dan Skidmore (Don DeFore), notices one bomb on Hess's plane has become stuck during a run over Germany, and when Hess shakes it loose it drops on a church and orphanage, killing 37 children. Returning home to Ohio after war, Hess becomes a small-town minister, but he's no good at his job, haunted by guilt over the accidental killing of children years before.

In 1950, with the invasion of South Korea, Hess reenlists not as a combat pilot but rather agreeing to oversee the training of pilots for the Republic of Korea Air Force, at a ramshackle former Japanese airbase near the front lines.

Unaware that their commanding officer is a minister, Hess's men refit the base, and he's reunited with old pal Dan, now a captain, who can't grasp Hess's crisis of conscience. When child refugees raid garbage cans behind Alan Hale Jr.'s mess (on Thanksgiving, no less), Hess comes to the aid of a shelter established at a Buddhist temple by half-Indian Korean En Soon Yang (British-Indian actress Anna Kashfi, soon-to-be Mrs. Marlon Brando) and wise if mysterious old man Lun-Wa (Philip Ahn, his performance inexplicably dubbed by an uncredited Paul Frees). Rather pointlessly story-wise, she falls madly in love with Hess, unaware that he's already married. Nevertheless, Hess develops a saintly-like devotion to the children of the orphanage, even if that means disobeying orders from his superiors.

In Three Stripes in the Sun, Aldo Ray played a M/Sgt. harboring racist attitudes toward the Japanese after he's assigned there during the Occupation. However, influenced by his own troubled childhood he stumbles upon an orphanage there and soon he has half the battalion contributing to its survival, all the while Ray's character falls in love with a Japanese woman. Unapologetically sentimental, it nevertheless is surprisingly honest and believable in depicting the M/Sgt.'s evolution from Jap-hating World War II vet to feelings he for a long time can't reconcile for the kids but mainly for the Japanese woman he falls in love with. Though probably made for less than $500,000, almost all of it was filmed on location in Japan, adding to its verisimilitude.

Conversely, Battle Hymn is Hollywood-imaged backlot Korea, the H.Q. in Seoul played by the same clocktower building later at the center of Back to the Future. Sets built in Nogales, Arizona, doubled for the Air Force training base. En Soon Yang's unrequited love for Hess seems inspired by the huge successes of Love Is a Many-Splendored Thing (1955) and the current vogue for movies about white men falling in love with Asian women (and, far less commonly, Asian men falling for white women). In Battle Hymn, what's really a minor subplot feels awfully and artificially shoehorned into the plot.

It's the religious angle, however, that's most grating, unbelievable and contradictory. "Killer" Hess seems oblivious to "total war" strategies implemented by the Allies, assuming his bombs were hitting only fuel dumps and the like while avoiding civilians. After bombing the orphanage (a decent miniature effect) Hess visits the site after the surrender (How?) and seems surprised when locals confirm that, yes indeedy, 37 children died there. In Korea, Hess absurdly seems to think that by staying out of combat directly while training South Koreans fighter pilots to do all the killing somehow skirts the harsh realities of modern warfare and, incredibly, when Hess inevitably has to shoot down a North Korean fighter to save a fellow flyer's life, he actually agonizes over the decision. The film's moral code is so screwy it's like the war movie equivalent of The Man without a Body (1959), a sci-fi thriller with such bizarre notions of identity and consciousness it leaves one's one head spinning.

Surprisingly, the movie was based on a real Hess, Col. Dean E. to be precise, who unlike the M/Sgt. in Three Stripes in the Sun was more the self-promoter and very persnickety about how his life would play out on the screen, Hess refusing original choice Robert Mitchum for the leading role. The picture is fictionalized to the point of barely resembling real events. Hess died in 2015 at 97.

Battle Hymn, in color and CinemaScope, looks fairly good though it seems to be an older HD transfer. The DTS-HD Master Audio (mono) is acceptable and optional English subtitles are provided. Region "A" encoded.

Supplements include a good audio commentary track by Nick Pinkerton and a trailer.

Douglas Sirk and Rock Hudson, along with producers Ross Hunter and Albert Zugsmith, partnered on a long string of solid melodramas, but Battle Hymn isn't one of them. Worth seeing once, but otherwise Rent It.