A dramatization of efforts to contain the Fukushima Daiichi Nuclear Power Plant disaster following the March 11, 2011 earthquake and tsunami, Fukushima 50 partly succeeds in its ambitious aims while being dramatically clunky in other ways. It's neither good nor bad, but it is unusually political, harshly critical of the blunders of both the Japanese government and TEPCO, the energy conglomerate operating the plant. Such direct criticism is almost unheard of in a mainstream Japanese movie. Star Ken Watanabe reportedly spearheaded the film, adapted from On the Brink: The Inside Story of Fukushima Daiichi, a non-fiction book by Ryusho Kadota.
The film unavoidably invites comparisons to the superb 2019 miniseries Chernobyl, which tells much the same story better in every way. That series was almost unbearably tense and deeply disturbing, while Fukushima 50 is curiously devoid of tension because its mostly accurate account of events is undermined by a confusing and needlessly sentimental screenplay. Nonetheless, overall, it's somewhat better than one might have expected. 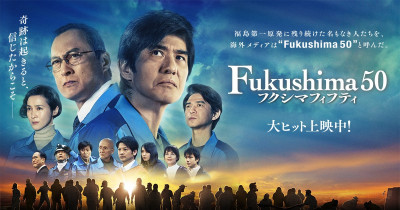 Soon after the 9.0-magnitude earthquake, 14-meter (46-foot) high waves from the resultant tsunami engulf the plant, past its seawall and into the lower levels of reactors 1-4. With electricity already out, the workers had been relying on back-up diesel generators to pump coolant through the reactors' cores. With those now destroyed, multiple nuclear meltdowns and the release of radioactive contaminants into the sea, soil, and air seem inevitable. Unless the workers can improvise solutions while exposing themselves to possibly lethal doses of radiation, all of eastern Japan could become uninhabitable for decades to come.

Neither portrait is flattering. Prime Minster Kan comes off as an ill-informed micromanager, yelling and flailing about, terrified Japan will be destroyed until his watch, while Onodera exemplifies TEPCO's overriding image consciousness and willingness to put the plant's economic survival ahead of human lives. Here, the film is impressively honest and direct.

But the screenplay by Yoichi Maekawa and Setsuro Wakamatsu's direction are deeply flawed in other respects. Early in Chernobyl there's a cleverly written scene in which, en route to the disaster, the leading Soviet politician asks the leading scientist to explain how a nuclear reactor works. It's perfectly timed, providing the audience with exactly the kind of basic technical knowledge they need to understand what's happening onscreen. In Fukushima 50, it's all technobabble that mostly goes unexplained. Worse, spatial relations aren't clear at all: for most of the film, I had no idea where Yoshida and his team were in relation to the power plant's control center where Izaki toiled. In another part of the plant's grounds? A few miles away? In Tokyo? It wasn't until the movie was more than half over that became clear. Further adding to the confusion, the script incorporates abrupt flashbacks, flash-forwards, and even imagined scenarios that haven't yet happened and, in most cases, never do. The movie would have been much stronger dramatically had all the action been confined to the efforts of Izaki and Yoshida, from their perspective, but instead there's a lot of dead weight concerning Izaki's estrangement with his adult daughter and other problems with his family. As if an earthquake-tsunami-nuclear disaster weren't enough drama for one film.

Some of this material also seems to exist solely to dazzle us with CGI effects. Chernobyl has some of the best use of CGI I've yet encountered, precisely because one hardly notices it's there. But Maekawa and Wakamatsu can't resist showing us completely unnecessary visual effects like the initial earthquake as seen from the bottom of the ocean, or footage of a dead, deserted Tokyo covered in gray ash in one imagined scenario.

Watching Fukushima 50 it struck me how much it resembles big studio movies about the Imperial Navy during the Pacific War, all-star and spfx-filled extravaganzas like Storm Over the Pacific (1960). Nearly all the same tropes are there: the rank-and-file ready to sacrifice their lives for the good of Japan, leaders continually frustrated by the terrible decisions made at the top levels of government, the spirit of comradeship, graphics identifying the name and position of all the important characters, dates, and places, etc. Fukushima 50 is overwrought and sentimental in ways Chernobyl is subtle and emotionally authentic, and thus more powerful.

Toward the end, Fukushima 50 is also almost comically naïve. Screenwriter Maekawa positively adores the Japanese Self-Defense Forces and the U.S. Military, the latter portrayed by the usual batch of terrible gaijin talent. (Spoilers) Also near the end, when one of the characters from the plant arrives at an evacuation center, he apologies (lots of deep bowing) to those families, explaining that, despite his best efforts, their town is now uninhabitable. Incredibly, instead of beating the man to death, everyone practically gives him a hero's welcome: "That's okay! You did your best!" Would people who've just lost everything react that way? Hardly, I would imagine.

An epilogue further invites incredulity, completely ignoring the fact that Japan's central government and TEPCO have learned nothing since the disaster, and continue to push nuclear power while ignoring the dire warnings of scientists against the reopening of other plants. Instead there are cheery images of clean energy installations, and text suggesting that Fukushima's resurgence will symbolize the country's victory over adversity at the 2021 Olympic Games. In fact, many Fukushima residents are outraged at the government's exploitation of their loss, hardly fully recovered even now, or that in the 20 years since the disaster TEPCO barely received a slap on its wrist, and fought in the courts against even minimally adequate financial compensation to residents after lying for years about the plant's supposed safety. Indeed, the very release of this Blu-ray coincides with the controversial discharge of treated radioactive water from the plant, with current Prime Minister Suga declining a cup of the "safe" drinking water.

Released by MPI, Fukushima 50 is presented in its original 2.35:1 widescreen with two audio options, DTS-HD Master Audio 5.1 mixes in its original Japanese with optional English subtitles, and a 5.1 mix with English dubbing, though I can't imagine wanting to view (and listen) to the film this way. All of the graphics have been converted to English-only. Picture and sound are generally excellent, up to contemporary standards. Region "A" encoded.

Other than a trailer, no extras.

Customer and IMDb User reviews of Fukushima 50 have been overwhelmingly bad, but it's really a mixed bag, with impressive elements and some pretty embarrassing ones. If the Chernobyl miniseries rates an A+, Fukushima 50 earns about a C+. Rent It.