Defending Your Life (The Criterion Collection)

Defending Your Life (1991) is not the Albert Brooks film I admire most -- that would be his disturbing and hilarious Modern Romance (1981) -- but, if IMDb User Reviews offer any clue, it's by a wide margin the sentimental favorite, an atypical crowd-pleasure from a writer-director-comedian who rarely provides happy endings to his uncompromising screenplays and, regrettably, that may be one of the reasons he's made criminally too few films.

Another reason seems because Brooks' film comedies (and his earlier stand-up) are unique, completely unlike the film comedies of his contemporaries, who either fell into projects almost always unworthy of their talent (think: John Candy) or eventually fell into mediocrity after showing much originality in their early work (e.g., Steve Martin). When one thinks of the great movie comedians, nearly all are traceable through various influences, through venues like Vaudeville, English music halls, burlesque, early silent film. The major exception from that first great era of classic film comedy was W.C. Fields, who despite a long stage career created not one but two unique screen personae: the unrepentant grifter and the hen-pecked but genial patriarch, each quite unlike anything in movies before or since. Brooks is cut from similarly rare cloth. His concerns are ever so slightly different from even the most talented of his and generation, addressing nagging issues of self-esteem and interpersonal relationships in ways more honest than serious drama. And they're often hilarious at the same time. 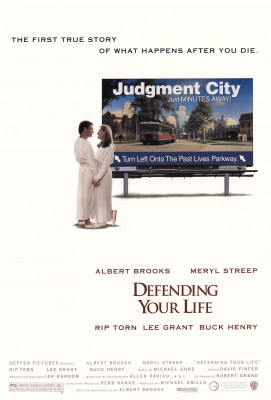 In Defending Your Life Brooks plays Daniel Miller, a Los Angeles advertising executive, who on his birthday treats himself to a brand-new luxury convertible and is promptly killed in a self-made head-on collision with a commuter bus. Instantly he finds himself aboard a tram bound for Judgment City, a Purgatory-like -- but, significantly, non-religious -- waystation. There he and other recently deceased humans are the subject of hearings to determine whether they'll be allowed to proceed into the next plane of existence, something like reincarnation -- or sent back down to earth, to try again.

Daniel is introduced to his defense attorney, breezy Bob Diamond (Rip Torn), who cheerfully explains that because human beings use less than 5% of their brains (Diamond, more evolved, uses 47% of his) most men and women are held back by their own needless fears. Diamond seems unconcerned about the trial-that's-not-really-a-trial, but Daniel's not so sure. Facing no-nonsense prosecutor Lena Foster (Lee Grant), images from Daniel's past projected onto a movie screen seem to leave no doubt that hapless Daniel will be shipped back to earth for another go. (One prescient montage anticipates the "epic fail" videos one finds on Facebook and YouTube.)

But during his nine-day ordeal in utilitarian Judgment City, which resembles the hotels and convention halls one finds around big airports, Daniel meets Julia (Meryl Streep), another rare 40-something among the mostly old men and women. Charmed by his sardonic humor, she unexpectedly falls in love with hapless Daniel, and he certainly falls in love with her. Julia, in sharp contrast to Daniel, led an impressively carpe diem-filled life back on earth (even saving her children and family cat from a raging housefire) though -- and this is pointedly emphasized -- not without its problems and misfortunes. Clearly, though, she's a shoo-in for promotion into the next world. What will happen then when, inevitably, they must part?

Defending Your Life is sweet and funny, sometimes both at once, and often hilarious. Brooks creates a deliberately bland but comforting vision of the afterlife, one where you can pig out on the most delicious meals and never gain weight, while sidestepping weighty questions that arise only after the lights are back on and you're on your way home from the theater. For example: What if you're sent back as a starving Syrian refugee? Or as a cockroach? The odds would seem stacked against you. On the other hand, Brooks wisely keeps all organized religion off the table, even more than movies as varied as A Matter of Life and Death and Oh, God!. Much emphasis is placed on confronting one's fears rather than one's moral choices, contribution to society, generosity to others, etc. It keeps the script focused, but does seem an odd choice as a single measurement of a person's character.

Nevertheless, one hears that Defending Your Life is a popular title for people in hospice and palliative care; it's that's reassuring. Except for James L. Brooks, in movies like Broadcast News, Brooks' screen persona would seem difficult to right for; he makes it seem effortless, almost improvised, yet one assumes it requires the same precision of great dialogue writing as a Billy Wilder or Preston Sturges film. Defending Your Life further benefits from the scene-stealing performance of Rip Torn. Though he'd done a few comedies before this, prior to Defending Your Life Torn was thought of as an intense dramatic actor along the lines of Harvey Keitel. Another actor would've been just fine with Brooks' dialogue, but Torn really embellishes it with complexities that surprised even Brooks. Diamond is reassuring but not reassuring, not deliberately condescending but condescending nonetheless, he doesn't mock Daniel's failing but kind of does, though affectionately so. Together, Brooks and Torn fashion a truly original comic character, which Torn would harness with great success and variation on The Larry Sanders Show and 30 Rock. He's so good he almost overwhelms the film.

Also delightful but not usually acknowledged are all the bit players playing Judgment City's eager-to-please staff of waiters, bellhops, and the like, such as Eduardo (James Manis), the manager of an Italian restaurant who positively insists Daniel take home a boatload of pies, causing him enormous embarrassment.

Criterion's Blu-ray of Defending Your Life is a director-approved 4K transfer from the original camera negative and presented in its original 1.85:1 widescreen. Brooks wisely avoids special visual effects, which are limited to a handful of matte paintings, and the presentation improves greatly upon Warner Home Video's solid DVD version. The original 2.0 surround was remastered from the original tracks, Criterion's liner notes advising viewers to be sure to enable Dolby Pro Logic receivers to properly play the Dolby 2.0 surround audio. Optional English subtitles are provided on this region "A" encoded disc.

The highlight of the long list of supplements in a new conversation between Brooks and filmmaker Robert Weide. Due to the COVID-19 pandemic, they're photographed at different locations, but the lighting, editing, etc. almost convinces us that they're in the same room. Also new is a featurette-interview with theologian (!) and critic Donna Bowman, a clever extra. A trailer is included, along with newly edited 1991 interviews with Brooks, Grant, and Torn. A fold-out booklet, designed as "Your Visitor's Guide to Judgment City (Courtesy of The Continental)" includes an affectionate essay by filmmaker Ari Aster.

A fine, funny comedy that sure to please audiences unfamiliar with Albert Brooks, Defending Your Life is a DVD Talk Collectors Series title.