While a big critical and commercial success in its day, Cecil B. DeMille's The Greatest Show on Earth (1952) doesn't get a lot of love today. The reason? It won the Academy Award for Best Picture, beating out the much more deserving The Quiet Man, while other great movies like High Noon, Singin' in the Rain, and The Bad and the Beautiful weren't even nominated. (Still others, such as Othello, Limelight, and Ikiru probably weren't eligible that year.)

The Greatest Show on Earth is, as the trades used to say, sheer hokum, corny as hell, but it remains all these decades later highly watchable and entertaining just the same. As in other circus films, it greatly romanticizes this curious avenue of show business and, seen today, offers a unique look into a form of entertainment now largely extinct. Filmed in cooperation with Ringling Bros. and Barnum & Bailey Circus, it documents many of their top acts in early postwar America.

Hard to imagine now, but there was a time when many children dreamed of running away from home to join the circus, and it's seen here with that same wide-eyed innocence, before a more enlightened awareness of the industry's mistreatment of animals, a dark facet of circus life that really only entered the public consciousness 20-odd years ago. Where in the movie adults and children alike gape in wonder at the death-defying stunts of flying artistes and laugh uproariously at the animal antics and the slapstick of the clowns, today it's hard to imagine them sitting through a performance without becoming bored and turning to their cellphones and laptops for more modern, techno-driven diversions. Ringling Bros. itself ceased operations in 2017. 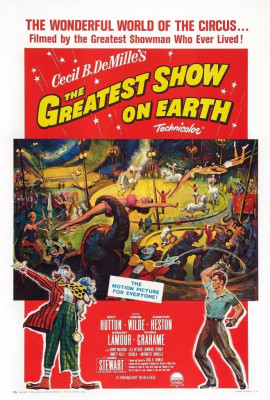 Running just over two-and-a-half hours (it seems shorter) and pompously narrated by DeMille himself, his voice famous for his long-running radio series, the all-star film is an ensemble melodrama. Brad Braden (Charlton Heston) is the humorless general manager with "sawdust in his veins," determined to keep the circus profitable for a full season in order to keep his 1,400 performers and roustabouts employed.

He's hired the Great Sebastian (Cornel Wilde), a headliner trapeze artist with a reputation as a vain troublemaker and ladies' man. Purely for commercial reasons he's given the top spot on the bill: the center ring. This upsets Brad's girlfriend, Holly (Betty Hutton), a star trapeze artist herself who's spent the last three years perfecting her act. Meanwhile, Brad must also contend with Harry (John Kellogg), a crooked midway concessionaire in league with gangster Henderson (Lawrence Tierney); pathologically jealous elephant trainer Klaus (Lyle Bettger), whose girlfriend, Angel (Gloria Grahame), had once been Sebastian's lover and now pines away for Brad; and dimwitted iron jaw artist and vocalist Phyllis (Dorothy Lamour), another of Sebastian's past lovers, who bellyaches about everything.

Only Buttons (James Stewart), a clown with a mysterious past and always in full makeup, never gives anyone trouble; indeed, he's at least as beloved as star clown Emmett Kelly (as himself).

As a source of melodrama, circuses are limiting as a movie genre. Likeminded films such as Carnival Story (1954), Trapeze (1956), The Big Circus (1959), Circus World (1964) and others all have the same plot elements: a driven circus manager determined to keep the show running at all costs; high-wire acts complicated by love triangles and tragedy; an insanely jealous man with a dangerous animal act; real circus performers and performances integrated with those faked by actors; a disaster that threatens to close the show permanently, etc.

The Greatest Show on Earth plays to DeMille's late-career strengths (and weaknesses) for overwrought, bigger-than-life drama presented on a grand scale, and in Charlton Heston he found an ideal leading man. Heston was barely 29 years old and had only appeared in one other Hollywood-made feature before this, the quite good noir Dark City (1950), yet comes off like a hardened veteran who knows absolutely everything about anything related to running a circus, which DeMille likens to a massive military operation. He even barks orders while being operated on and losing massive amounts of blood.

Much of the scorn toward Greatest Show has unfairly been dumped on top-billed Betty Hutton, DVD Savant even declaring that she "doesn't look all that attractive." But as Paramount's great transfer makes much plain, besides being past 30, Hutton clearly trained harder than any member of the cast, for her trapeze scenes. Unlike Cornel Wilde (who turned out to be afraid of heights!), Hutton clearly does most of the high-wire work herself, even in many long shots. Yes, she's saddled with insipid dialogue, but in this Blu-ray version she comes off much more appealing than I had remembered, certainly far better than Anne Baxter's campy emoting in DeMille's next film, The Ten Commandments.

In point of fact, all the dialogue is pretty terrible. At one point, Brad even exclaims to Sebastian, "You crazy wonderful fool!" Any actor able to overcome lines like that deserves a medal.

The high-def sharpness of the Blu-ray reveals something else I hadn't noticed before: DeMille's extensive use of traveling mattes. In earlier home video version, some of these optical effects were painfully obvious, as they are again here. However, on the Blu-ray, one can just barely detect dozens of other nearly seamless shots of actors in the foreground with matted-in second-unit circus footage behind them. Watching this carefully, it becomes obvious, for instance, that James Stewart spent far less time on location than the main cast; most of his footage has him matted into the action, doubled by somebody else, or sitting on a crate or some-such with generic set dressing behind him, film easily obtained on a soundstage back in Hollywood.

The film was one of the first to employ multiple star cameos. Bob Hope and Bing Crosby, cameoing here, had done likewise for each other's solo films and their "Road" comedies usually featured a cameo appearance or two, but Greatest Show, four years before the cameo-overloaded Around the World in 80 Days, may have been the first of its kind. William "Hopalong Cassidy" Boyd, astride Topper, make a touching and too-brief appearance near the beginning (it was Boyd's last film), but DeMille's cleverly inserts most of the other cameos as audience cutaways, and in so doing, keeps the movie audience's eyes' glued lest they miss one. Some are big stars, like Van Heflin and Danny Thomas, but also there are faces recognizable to 1952 audiences like Nancy Gates, and in other cases familiar bit and character actors. In one scene, spectator Arthur Q. Bryan, the voice of Warner Bros.'s Elmer Fudd, marvels at a parade of Disney characters including Mickey Mouse, apparently part of a cross tie-in promotion of Disney's then-current Alice in Wonderland. The IMDb doesn't even catch all the unbilled players. One of the showgirls, for instance, is very clearly actress Jean Willis, who even has a line or two.

This reviewer's favorite circus film is the unjustly-maligned Circus World, the big Cinerama release starring John Wayne, and a better film in every respect. For one thing, Heston's humorless circus manager is so hard-boiled throughout he becomes comical toward the end, especially while being operated on and an earlier scene where Gloria Grahame tries to seduce Mr. Iceberg by filling his pipe and offering him coffee. Wayne plays the same character more or less in Circus World, but he has a lot more dimension: a sense of humor, alternately charming and pig-headed, worried about his adopted daughter (Claudia Cardinale), carefully sheltered from the alcoholic mother (Rita Hayworth) who abandoned her. In DeMille's film, the real circus acts are colorfully paraded one after another, but never spends enough time with any of them to get a real sense of their acts. Even Emmett Kelly plays second-fiddle to Stewart's unfunny clown. In Circus World we see fewer acts presented more or less in full, and because they're of European origin, there's a greater emphasis on Cirque du Soleil-like artistry rather than just thrills or slapstick. In Greatest Show, the disaster comes in the form of a spectacular train wreck, but the miniatures used are rather rinky-dink, less convincing than those found in Eiji Tsuburaya's Japanese spectaculars. In Circus World, there are two disasters, a huge, dangerous-looking fire and the awe-inspiring capsizing of a huge freighter, done for real and full-scale. The trapeze act drama in Greatest Show is insipid while that in Circus World, primarily the relationship between former star Hayworth's relationship with Wayne and Cardinale, has real emotional meat on its bones.

Still, DeMille's captures the glamor and, more significantly, huge scale of circus life well. Restored from its original three-strip Technicolor, the film has documentary-like images of circus life, and many of the spectators in the location footage are clearly real, ordinary people. For that aspect alone, the movie is worth seeing.

Part of "Paramount Presents," the labels much-belated line of classic releases, The Greatest Show on Earth is a thing of beauty, restored in 4K from the "original camera negative," presumably meaning the original black-and-white separation negatives. Technicolor and Ringling Bros.'s circus are a natural, and throughout the image is all but a blaze of bright primary colors. The DTS-HD Master Audio mono is good for what it is, directed to all three front channels; a Dolby Digital mono French track is included, and subtitle options in both English and French. A digital copy is also included on this region "A" disc.

As with The Court Jester, another "Paramount Presents" title, Leonard Maltin is on hand for a short featurette, more targeting general audiences than film buffs, but it does hit all the expected bases and offers lots of behind-the-scenes production stills and ad art.

Not great cinema per se but most enjoyable, especially as a family film on a rainy weekend, The Greatest Show on Earth looks great and is a DVD Talk Collectors Series title