As luck would have it, I coincidentally watched Criterion's new Blu-ray of The Furies (1950) just days after viewing Ramrod (1947), a similarly odd Western with many plot and character similarities. In Ramrod, directed by Andre de Toth, Veronica Lake plays ruthless ranch owner trying to cement control of the territory away from a rival rancher in league with her estranged father (Charlie Ruggles), while a drifter, played by Joel McCrea, is caught in the middle. In The Furies, the Veronica Lake role is played by Barbara Stanwyck, the father role by Walter Huston, and the McCrea part is (sort of) split between Gilbert Roland and Wendell Corey. Ramrod is better is some ways, though The Furies is superior generally. Neither film is great, but they're both impressively odd.

Nineteen-fifty signaled a huge shift in the Western genre, away from the formula B-Westerns of Roy and Gene and Hoppy, and the classical A-Westerns of the ‘30s and ‘40s and toward more complex and adult ones, heralded by the releases of Delmer Daves's Broken Arrow, Henry King's The Gunfighter, and Anthony Mann's Winchester ‘73, the first of that director's many collaborations with actor James Stewart. Mann also directed The Furies, one of three Westerns he made that year, the other being the mostly forgotten Devil's Doorway, made at MGM.

Because it's so different, critics have struggled trying to make sense of The Furies, some categorizing as a noir Western, and indeed this may be the darkest Western ever made, at least in the visual sense. Probably 90% of exterior scenes take place at night, while interiors tend to be dimly-lit. (Early drive-ins operators must have gone nuts trying to throw enough light onto the screen.) Others have pointed out its similarities to Greek mythology (its title referring to Erinyes, female demon-gods wreaking vengeance) as well as Shakespeare, particularly Lear, though dominating all is an implied incestuous relationship between Huston's and Stanwyck's characters. 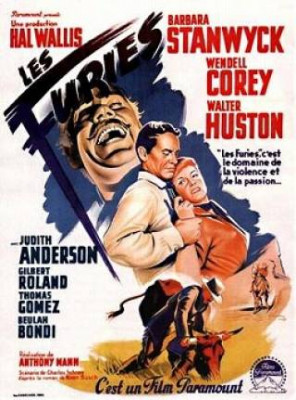 The movie opens with the return of tyrannical cattle baron T.C. Jeffords (Huston) to "The Furies," his far-as-the-eye-can-see spread, largely managed by adoring but hard-as-nails daughter, Vance (Stanwyck). Jeffords's son, Clay (John Bromfield) is largely irrelevant, ignored by both. Vance is secretly involved with Juan Herrera (Gilbert Roland), whose family is one of several squatting on Jeffords's vast land. Land and cattle rich but cash poor, T.C. is forced to borrow money from the Anaheim Bank in San Francisco, loaned on the condition that the squatters be forced off the land. Vance makes her father promise not to evict the Herreras but, also determined to inherit the Furies, she dumps Juan for Rip Darrow (Wendell Corey), only to be shocked when her father offers him a $50,000 bribe to leave her -- and he unhesitatingly accepts.

Vance's hold on the Furies weakens further when T.C. brings home a woman he plans to marry, calculating widow Flo Burnett (Judith Anderson), who admits to Vance that she's marrying T.C. mainly to secure a stake in the Furies and her own financial security. When Flo announces plans to ship Vance off to Europe, in a rage (fury?) she attacks Flo with a pair of scissors, permanently disfiguring her. This sets off a tit-for-tat series of attacks and humiliations by T.C. against his daughter, and by Vance against him, culminating with an elaborate revenge plot.

More interesting than the incestuous subtext of The Furies is that, at the height of anticommunist paranoia, a Hollywood movie could be made so condemning of unfettered capitalism, that Old West equivalents of today's billionaires are above the law. All of the major characters and most of the minor ones are corrupted: even always-likeable Wallace Ford's Scotty Hyslip, one of T.C.'s lackeys, is revealed as a former embezzler while the mostly pure Juan steals T.C.'s horses. But this, primarily, is a story of how in the untamed West the rich were the law and did whatever they wanted while the poor were so casually victimized they're not even in a position to protest the many injustices.

Much of the plot revolves around arrogant Jeffords's way of placating locals while also keeping creditors at bay: he's created his own legal tender, "TeeCees," essentially IOUs but extravagantly printed "money," like 19th century bitcoin. As in Ramrod, all relationships, even among family members, is transactional and mercenary. When T.C. first returns from San Francisco, Vance expects from him an elaborate diamond necklace, he first teasing her with a string of pearls. The ruse doesn't fool her, she clearly expecting compensation for "services rendered": her devotion to the Furies and a filial loyalty to T.C. that extends to scratching his back and Lord knows what else. The movie was Walter Huston's last; he died prior to its release. It's as if the gold dust from Treasure of the Sierra Madre hadn't been lost in a sandstorm and The Furies picks up on Huston's character some years later, corrupted by the same greed that did Fred C. Dobbs in. T.C. may be a ruthless dictator, but he still enjoys showing his men he still has The Right Stuff.

Neither Veronica Lake in Ramrod nor Barbara Stanwyck in The Furies really come off. I'd seen Lake in most of her other ‘40s films but in Ramrod de Toth can't hide her tiny physique (she must have been 4'11" and maybe 90 pounds dripping wet) and limited range. Stanwyck is better in The Furies but in these types of parts, which she returned to again and again (including Forty Guns, TV's The Big Valley and even, oddly enough, the Elvis Presley vehicle Roustabout) Stanwyck's acting is always visible. Where she disappears into her best film characters, in The Furies she's never entirely believable.

Criterion's The Furies sources not the original nitrate camera negative but rather a composite fine-grain master positive. It's therefore not quite as pristine and perfect as other 1950 titles, the film's overwhelming emphasis on nighttime exteriors and dimly-lit interiors complicating the transfer further, though it's certainly acceptable. Criterion manually removed "thousands of instances of dirt, debris, scratches, splices, and warps," which obviously helped. The mono soundtrack, derived from a 35mm optical track is uncompressed. Optional English subtitles are provided, and the disc is Region "A" encoded.

The supplements are most carry-overs from a 2008 DVD release. I was most impressed by the clever inclusion of Niven Busch's novel, published in its entirely as a separate book. All specialty labels should consider this option on future releases, especially for novels long out-of-print. Film historian Jim Kitses's audio commentary track from 2008 is included, along with a new and solid interview with critic Imogen Sara Smith. Mann himself appears in a British television interview conducted weeks, perhaps days before his untimely death, while filming A Dandy In Aspic. I don't think The Furies was even mentioned, but it's a good career overview piece. Walter Huston appears in an Intimate Interviews short subject from 1931, completely staged for the camera but entertaining and a bit enlightening nonetheless. Also included is a still gallery and trailer, along with a booklet featuring an essay by critic Robin Wood and a print interview with Mann from 1957.

The reputation of The Furies has become somewhat inflated in recent years, but it's certainly a wild, offbeat Western that deserves to be seen. Highly Recommended.