A real anomaly, Who Done It? (1956) is an Ealing comedy completely unlike the usual Ealing comedy, featuring Benny Hill in his debut feature and only starring film, a role unsuited to his talent. A frenetic but formula slapstick effort, it's a lot more like a late-period Abbott & Costello movie than anything either Ealing or Hill ever made.

Ealing Studios made a series of great postwar comedies - King Hearts and Coronets, The Lavender Hill Mob, The Man in the White Suit, The Ladykillers, etc. - movies notable for their whimsy and droll, eccentric characters. Who Done It? has no subtlety at all and the formula script, surprisingly credited to the usually better T.E.B. White, is an encyclopedia of familiar, recycled slapstick.

At the time, Hill was known primarily as a radio and emerging television comedy star, concurrent with The Goon Show. What is broadly known as The Benny Hill Show debuted on BBC1 in 1955, though it was really more a series of specials rather than a weekly series, alternating between the BBC and ITV through 1967, Thames television from 1969 to 1989, a total of 99 "episodes" made over a 34-year stretch. In between, Hill appeared in a handful of other movies, but always in supporting parts, most memorably in Chitty Chitty Bang Bang (1968) and The Italian Job (1969), but TV was really his métier. On the TV shows, Hill had complete creative control.

Beginning in 1979, the Thames-era specials were reedited for syndication in the United States, where they became an immediate sensation. Typically airing after 11:00pm on Friday or Saturday nights, Hill's mixture of racy, double entendre-laced humor, pop culture parodies, and silent movie era-influenced slapstick (often accompanied by "Yakety Sax," Hill's signature theme) garnered huge ratings. (It didn't hurt that when these shows first aired in the U.S., fleeting female nudity was inadvertently [?] left in these recut shows.) No less a giant of comedy than Charlie Chaplin admired Hill; Chaplin reportedly had a complete collection of Hill's TV work at his home in Switzerland. 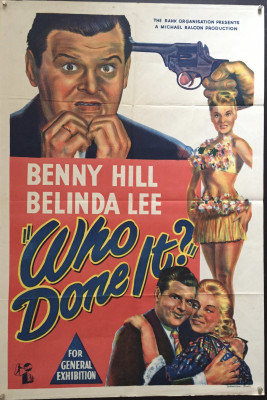 Here Benny Hill plays Hugo Dill, a fan of pulpy detective fiction working as a sweeper at an elaborate ice show. The movie was obviously scripted around a real production, the "Holiday on Ice" Corps de Ballet, and this footage is interesting as a historical artifact. Predictably, Dill's clumsiness soon has the entire production in disarray, but that's okay as he's just won a hundred pounds (and Fabian, a beagle billed as "Champion Appeline Hector of West Summerland"), both of which he intends to use to establish his own detective agency.

Hired by communist spies to impersonate scientist Otto Stumpf (Denis Shaw) at a demonstration of his weather-controlling invention, Dill is unaware that the spies actually plan on exploding the device, along with Dill, to rid the world of the West's leading scientists. A beautiful and unusually strong singer-skater, Frankie Mayne (Belinda Lee), who lost her position because of Dill's bumbling, also becomes entangled in the plot, which eventually leads to long set pieces at an international radio-television and a elaborate car chase finale.

Hill reportedly tried to liven up the formula slapstick with suggestions of his own, but he later complained "not one" of his many ideas were used in the finished film. The results are reminiscent of Columbia Pictures two-reel comedy department during the 1940s and ‘50s where, under the supervision of Jules White, the same violent slapstick style was employed regardless of the talents of the comedian(s) starring in the film. The aspiring but bumbling amateur detective plot driving Who Done It? was already stale in 1956, having been mined by everyone from Buster Keaton to Red Skelton. Except for a few funny voices (like Peter Sellers, a Hill specialty), it's the kind of generic comedy film lead anyone might have played just as well, even non-comic actors of the period like George Cole, Donald Houston, and Kenneth More.

It's the kind of broad slapstick film that children will likely find more amusing than adults. Only rarely do little flashes of the old Ealing style come through, most recognizably in the amusing scene where Dill, pretending to be Stumpf, demonstrates the high-tech invention, which makes funny sounds just like Alec Guinness's laboratory in The Man in the White Suit. (The presence of Ernest Thesiger in both films underscores this.)

Most of the rest of the cast play stock comedy characters, with Garry Marsh particularly over-the-top as Det. Inspector Hancock, at the receiving end of Dill's blunders. As the female lead, Belinda Lee is wasted as she all too often was. After a showy vehicle in Rank's The Feminine Touch (1956), a medical drama, the company immediately saddled her with this near-embarrassment. Following a suicide attempt and films in Italy, Lee died in a car accident on the highway between Los Angeles and Las Vegas. She was only 25 years old.

As with Kino's concurrent Blu-ray of The Green Man, Who Done It? boasts a 4K restoration from the original camera negative, but while that looks splendid, the 1.37:1 standard format presentation is clearly in the wrong aspect ratio, which should be 1.66:1 widescreen, made obvious by the title blocking and headroom above the actors. It does look great, however, and the DTS-HD Master Audio (mono) is also strong, with optional English subtitles provided on this Region "A" encoded disc.

Supplements include an audio commentary track by writer Bryan Reesman and a 1969 theatrical short subject starring and written by Hill, The Waiters, which runs about 30 minutes. It's far better than anything in Who Done It?.

Interesting as an unusual failure but no career highlight for its star, Who Done It? is a Rent It.