Severin // PG // May 17, 2021
List Price: $34.95 [Buy now and save at Amazon]
Review by Stuart Galbraith IV | posted June 14, 2021 | E-mail the Author
The best of the innumerable Jaws imitators, Grizzly, "Jaws with Claws!" may be derivative and uninspired, but for 1976 movie audiences it delivered the goods, with gruesome bear attacks in every reel. More impressive is that it was competently made on a budget of just $750,000 -- less than one-tenth the cost of the $9 million Jaws -- and yet it earned nearly $40 million at the box office, making it one of the most successful independent productions ever.

The behind-the-scenes stories of Grizzly, exhaustively recounted on the Blu-ray disc's special features, are far more interesting than the movie itself. Edward L. Montoro's Film Ventures International, which financed and distributed Grizzly, was a notoriously crooked company, in business from 1968-1985. Montoro reportedly refused to comply with the profit-sharing agreement with Grizzly's producers/writers David Sheldon and Harvey Flaxman, and director William Girdler (who died soon after in a helicopter crash), who had to file suit to get the money owed them. In 1985, when FVI was going bankrupt, Montoro fled the country, reportedly to Mexico, with $1 million in embezzled company funds. He and the stolen loot remain missing to this day. 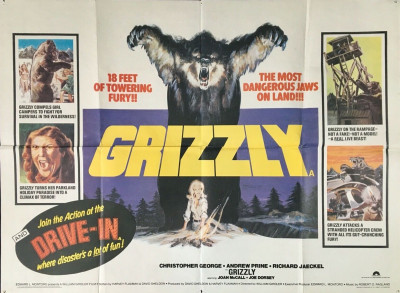 The three men, like Roy Scheider, Richard Dreyfuss, and Robert Shaw in Jaws, are at odds with the park supervisor, Charley Kittridge (Joe Dorsey), who like Murray Hamilton's mayor in the earlier film wants to keep the park open for business, despite the danger, and spins the growing tragedy to the local press. And like Jaws, a growing carnival atmosphere ensues as hunters from miles around swarm the park, eager to kill the grizzly themselves but who only gum up Kelly's search for the bloodthirsty beast.

Grizzly deserves points for a production polish that belies its comparatively low budget. The anamorphic wide screen format (Todd-AO 35) helps give it a more epic quality while showing off the park's scenery, including some impressive second unit helicopter flyovers. The musical score by Robert O. Ragland, known chiefly for his exploitation film work, is also unusually lush and scored with a big orchestra. George, Jaeckel, and Prine were not big marquee names, but they were familiar faces to moviegoers of the time, George for the TV series Rat Patrol, Jaeckel for his decades of movie work (including an Oscar nomination for Sometimes a Great Notion), and Prine for his near-constant presence in television guest spots and, occasionally, films like Chism, the 1970 John Wayne Western co-starring Christopher George. Their performances elevate the inferior material.

Likewise Joe Dorsey's park supervisor, Dorsey being one those faces seen in myriad big films throughout the 1970s and early ‘80s (The Longest Yard, Norma Rae, and especially Brainstorm) without viewers knowing the name of the actor they remember from past work. Dorsey even resembles Murray Hamilton slightly, and like Grizzly's stars he rises above the material.

The movie itself ain't much, just a series of bear attacks every ten minutes or so of screentime, with a lot of arguing and angst in between killings about the best way to find and kill (or, briefly discussed, capture) the killer grizzly. For a 1976 mainstream release rated PG, Grizzly is fairly gruesome, with bloody, violent attacks on women and even children, with much dismemberment (including, incredibly, the decapitation of a horse!). Grindhouse audiences had been used to this level of graphic violence for nearly a decade but, for mainstream theatergoers in 1976, Grizzly was unusually gruesome.

Jaws, of course, famously employed a mechanical shark, though because it never seemed to work properly it's not in the film all that much. Grizzly's budget was too low to seriously consider such animatronic magic, and for most of the film director Girdler relies on P.O.V. shots combined with brief shots of a real bear in tight closeup. For the climax, though, an 11-feet-tall Kodiak bear named Teddy doubled for the 15-foot Grizzly. When I first saw the film in its network television premiere, I had assumed the big bear interacted with a miniature helicopter maybe one-half or three-quarters scale but no -- the bear really was as big as it appears in the film.

A Severin release, Grizzly has been remastered in 2K from "the internegative" and the results are far superior to earlier home video releases, though still imperfect. Todd-AO 35 was akin to CinemaScope and Panavision, but movies shot in that process often possess a subtly different look for reasons I can't explain: darker and more contrasty with more visible grain. Conquest of the Planet of the Apes (1972) has all those earmarks, as does Grizzly and other Todd-AO 35 films. Or maybe it has more to do with the fact that Severin is sourcing an IN rather than the original camera negative. In any case, Grizzly looks better than ever, but not quite perfect. The DTS-HD Master Audio 2.0 mono is surprisingly robust, and optional English subtitles are offered on this region "A" disc.

The extensive supplements, a mix of new and older material, begin with two audio commentary tracks, one with historians Nathaniel Thompson and Troy Howarth, and the second with producer David Sheldon and actress Joan McCall. Featurettes in high-definition include a 45-minute career retrospective of director Girdler, hosted by Stephen Thrower, an interview with actor Tom Arcuragi and, once again Sheldon and McCall. There's a 36-minute long archival audio-only interview with Girdler and business partner J Patrick Kelly III, a seven-minute archival making-of featurette, radio spots and trailers in high-def.

Unpretentious and entertaining, if derivative, Grizzly achieves its modest aims and scores a bullseye. Not bad, considering, and Recommended.