The Criterion Collection // Unrated // May 25, 2021
List Price: $39.95 [Buy now and save at Amazon]
Review by Stuart Galbraith IV | posted June 15, 2021 | E-mail the Author
It was during a binge-watch of myriad film noir that I first encountered Nightmare Alley (1947). After dozens of other good-to-great noir, Nightmare Alley, directed by Edmond Goulding, proved a real shocker on many levels; its basic plot, reminiscent of Tod Browning's notorious Freaks (1932), has supernatural and even horror film elements. It's a film best viewed cold, without any knowledge of what it's about (If you haven't seen it yet, you'll want to stop reading here), and while seeing it again all these years later was minus all its surprises (while noticing a lot of Production Code-era compromises), it's a film that still impresses. When it was new, it had to have left movie audiences shell-shocked, especially fans of Fox star Tyrone Power, who gives one of his very best performances playing a character light years removed his usual screen persona. 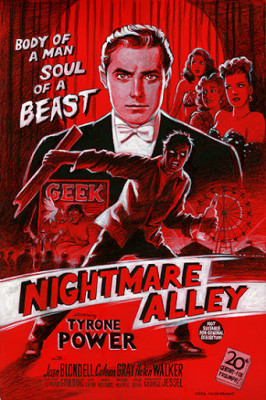 Based on William Lindsay Gresham's novel The Great Stanton, published the year before, the film is mostly set in a seedy, traveling carnival where barker Stanton "Stan" Carlisle (Power) is fascinated by the carnival's popular geek, billed as a half-man, half-ape creature that bites the heads off live chickens. Stan also shills for "Mademoiselle Zeena" (Joan Blondell), who performs a colorful mind-reading act, barely aided by her hopelessly alcoholic husband, Pete (Ian Keith), they former headliners in Vaudeville until Pete starting drinking.

Their earlier success was attributed to their use of a complex code worth a small fortune, a "nest egg" Zeena considers selling in order to send Pete away for the "cure." Stan is flirtatious with both Zeena and beautiful Molly (Coleen Gray), assistant to Bruno the Strongman (Mike Mazurki), hoping middle-aged Zeena will teach him the priceless code. However, after a tarot card reading suggests teaching Stan the code will result in Pete's death, Zeena (she rhymes tarot with "carrot") refuses Stan's romantic and professional advances.

Soon after, while Zeena tries weaning Pete off the booze, he bumps into Stan who, feeling sorry for the pathetic drunk, hands him a bottle of moonshine he's just bought, unaware that he's accidentally given Pete an adjacent bottle of wood alcohol, which kills Pete within hours. Though devastated by her husband's death, Zeena finally agrees to teach Stan the code, with Molly's help.

However, the burgeoning romance between Stan and Molly is discovered, and the family of carnies force them to marry (Carny code or Production Code, I wonder?), though proves is a blessing in disguise: Stan and Molly leave the carnival, forming a new act using the code, which becomes a nightclub sensation. After encountering a dodgy "consulting psychologist," Lilith Ritter (Helen Walter), who treats Chicago's elite class, secretly recording their sessions, Stan hits upon the idea of an even greater con, but a visit from Zeena and her tarot cards predict even greater tragedy.

Nightmare Alley is a stunner, hypnotic with its portrait of unseemly carnival life that's both seedy and romanticized all at once. Psychiatry, already looked upon with great skepticism in 1947, is portrayed here with utter contempt, viewed as much a con for suckers as anything on the midway. Jules Furthman, who penned many of Howard Hawks' best films (including Only Angels Have Wings, To Have and Have Not, and Rio Bravo), adapted from the novel by Gresham, whose own life tragically mirrored Pete and Stanton's in some respects. (He was an abusive alcoholic who eventually took his own life.)

One of the great things about the film is the delicate handling of the various confidence tricks. The movie audience is always aware how the mind reading acts are pulled off generally, while always leaving an air of mystery about them. Indeed, the ambiguity is such to imply that Stan is not only an unusually, naturally talented performer (he impresses the other carnies with his cold reading of a hostile sheriff, disarming his threats of mass arrest in the process), but also that he may actually possess some powers of ESP. Further, Zeena's tarot card readings are uncannily, consistently accurate also, giving the picture a supernatural air. Late in the film Power fakes a poltergeist staged so convincingly that the effect - even though we know it's not real - is nonetheless mesmerizing, almost scary.

Nightmare Alley was, arguably, Power's finest film performance, the undervalued actor creating a character somewhat unusual in film noir, likeable and almost an audience surrogate in the first act, ruthless and almost psychopathic later, pathetic and sympathetic at the end. Ben Nye created the makeup that subtly but disturbingly transforms Stan in the last scenes. One is reminded of the less successful efforts in the Spencer Tracy Dr. Jekyll and Mr. Hyde, with its minimal makeup, and how convincing Power is in contrast. Stan is driven by a need to manipulate and control others (as opposed to monetary greed or lust, the usual motives that drive most noir) while at the same time continually upping the ante, like a heroin addict increasing his doses. At the carnival he's strongly attracted to the con games because "it gives you a sort of superior felling....It's as if you were in the know, and they were on the outside looking in." Stanton is amoral as opposed to immoral; the former is much harder to play and pull off, and this leads him astray, making his ultimate fate all the more tragic.

To Molly's great discomfort, cocky Stanton eventually adopts a kind of evangelist fervor to the act, and Power, always an underrated actor, is superb. Indeed, the performances are terrific all-around, from a perfectly-cast Blondell to Ian Keith's Pete, a man all-too-aware of how far he's fallen.

Cleverly, the carny world is seen only from the vantage of the general vicinity where Stanton, Zeena, Bruno, and Molly work and sleep - their neighborhood, so to speak. Stanton becomes fascinated with a geek act a few tents down (the importance of which becomes clear later on), but the geek himself is never seen clearly, another good idea.

Producer George Jessel (yes, the Toastmaster General himself) and his estate held up the picture's rights for many years, making Nightmare Alley somewhat harder to see than other classic noirs. It looked okay in an earlier DVD version, but Criterion here sources a 4K scan of a 35mm nitrate composite print. The results are less than perfect: like other Fox titles, at times it feels overly-processed, with too much DNR though, in this case, that's mostly limited to the opening titles and other process shots. Overall, it's mostly pleasing to the eye. The LPCM 1.0 mono audio, also sourced from composite elements, fares better. Optional English subtitles are offered on this region "A" disc.

Supplements abound. They include a fascinating featurette hosted by sideshow historian Todd Robbins, a video essay by critic Imogen Sara Smith, a 2007 interview with actress Colleen Gray, and a 1971 audio interview with director Henry King (who discovered and directed Power in numerous films). Noir historians James Ursini and Alain Silver provide an enlightening audio commentary, while Kim Morgan contributes a booklet essay. A trailer, sadly textless and lacking narration, is also included. A neat extra rounds out the supplements: a collection of six tarot cards.

Guillermo del Toro has directed a remake of Nightmare Alley, scheduled for release this December. It's a rare instance of a film that could benefit being made, and by hands that could pull it off. In the meantime, the original film still holds up remarkably well, given a fine Blu-ray release from Criterion. A DVD Talk Collector Series title.