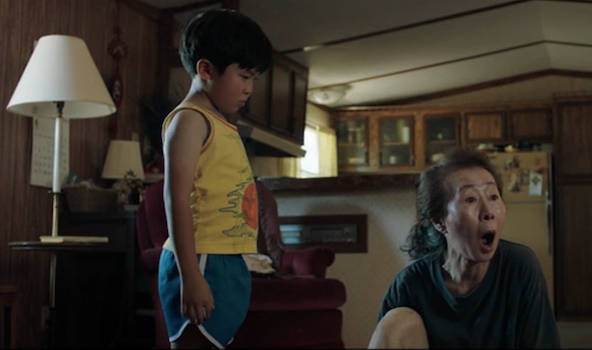 Minari is a great film, upholding the informal tradition of intimacy in American indie cinema. Certain cinephiles like to armchair quarterback the Academy Awards and, being of that sort, I would eagerly join the crowd who would have given the most recent Best Picture Oscar to this quiet character study set in the underexposed middle of the United States. Not that the actual winner, Nomadland, is without merit, but the family story of Minari -- so brilliantly brought to life by the pitch-perfect cast -- is more immediate and, to this viewer, more resonant.

Set in the 1980s, Minari is a semi-autobiographical remembrance by writer-director Lee Isaac Chung. Chung's stand-in is David (Alan Kim), a shy little boy with a heart defect. At the start of the film, David is transplanted to rural Arkansas with his slightly older sister Anne (Noel Kate Cho) and his Korean immigrant parents, Jacob (Steven Yeun) and Monica (Yeri Han). They have left behind California and a bustling city life for an isolated trailer on a big plot of land where Jacob hopes to start a Korean vegetable farm. Monica is skeptical, to put it mildly. The film gradually reveals that the prior owner of the land became suicidal because he was unable to get anything to grow, so her skepticism seems warranted.

With a haunted backstory like this, the film could conceivably turn into an Amityville Horror situation. Instead, nothing supernatural is required to create tensions within the family.

Jacob and Monica work as chicken sexers, sorting male from female chicks in a hatchery. Jacob is oddly talented at the task but hates its soul-crushing mundanity. That's why he wants to grow and sell his own food, to have something that's his. Monica understands somewhat, but finds herself crushed in a different way, by the isolation and low-rent amenities of their new life.

Jacob suggests Monica's mother, currently still in Korea, come and live with them -- to help with the kids and hopefully help Monica feel a little more stable. Enter Soon-ja (Yuh-Jung Youn, delightful in her Oscar-winning role). For little David, Soon-ja is a horrible disappointment as a grandma: she can't cook or bake cookies. She is raucous, loud-mouthed, fond of cards, and obsessed with watching American wrestling on television.

Minari is character-driven and doesn't depend on big plot turns, but Chung's script is a delicate and intricate interweaving of little stories: David's resistance to Soon-ja; Jacob's unusual friendship with Paul (Will Patton), an evangelical white farm worker who could have stumbled out of Sling Blade; Monica's desire to maintain her standard of living in middle-of-nowhere America. Each little story bumps against the others, creating new tensions and complications in organic and sometimes surprising ways. Steven Yeun and Yeri Han invest their characters with rich histories that the film only tersely suggests, making them effortlessly compelling and sympathetic -- even when Jacob and Monica stubbornly refuse to see beyond their own goals.

Despite the increasing family strife at its center, Minari is oddly cozy. The film has the comforting familiarity of an oft-viewed photo album without over-indulging in cutesy nostalgia. There's a gentleness to Chung's approach, but it doesn't short-shrift the emotional complexity of his reconfigured memories. The honesty and naturalness of the filmmaking is what makes it disarming and ultimately quite powerful.

The Blu-ray
The Minari Blu-ray also comes with a Digital HD code.

The Video:
The AVC-encoded 1080p 2.39:1 presentation is exactly what you hope for a brand-new film shot digitally. Excellent depth and clarity, with a film-like texture. A high bitrate guarantees no noticeable encoding issues.

The Audio:
The Korean and English DTS-HD MA 5.1 surround audio mix is strong and clear. Not super flashy, but noticeable ambience in the surround speakers and Emile Mosseri's musical score gets to show off a bit. Burned-in English subtitles appear for the Korean dialogue, and the disc offers English SDH and Spanish subtitles options.

- A fairly laidback, chatty, and consistently informative discussion about making the film and old family memories. Thankfully, it never peters out.

Final Thoughts:
Minari is an intimate reflection on childhood, family, and the immigrant experience that both warms and breaks your heart. Highly Recommended.