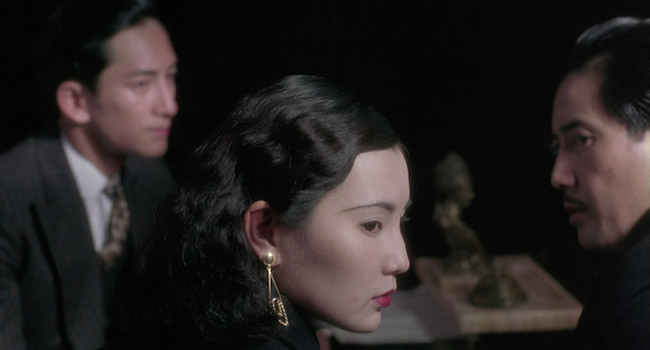 Ruan Lingyu is touted as the "Greta Garbo of China" on the box for the 1991 film Center Stage from director Stanley Kwan. Watching Kwan's deconstructed biopic of Ruan, however, one might think more immediately of a doomed early Hollywood starlet whose unfortunate exploits became fodder for one of Kenneth Anger's Hollywood Babylon books. Ruan committed suicide in 1935, at age 24, seemingly to escape from malicious gossip in the press. In the process, she became a legend.

Kwan's film examines Ruan's short time as a top box office star and the love triangle that was her undoing. Rather than tell a straight rise-and-fall story, Kwan juxtaposes dramatized vignettes from Ruan's life with modern-day interviews, film clips of actual Ruan Lingyu performances, and some meta-dramatic moments depicting Center Stage's film crew at work. All these elements combine to create a tricky look not only at a life, but at the facts and mythologies that go into the making of a film legend.

In interviews, Kwan's cast (in casual modern dress) ponder whether Ruan would be as famous if she hadn't died at her peak. At one point, Kwan asks star Maggie Cheung (Irma Vep), who plays Ruan Lingyu in the dramatic scenes, if she would commit suicide over the same sort of scandal as depicted in the film. Cheung clearly wants to laugh off the question, but thoughtfully responds that if she ever killed herself that it would be "for her" and not other people.

This reflective, fractured approach to telling Ruan's story is thought-provoking but it takes some getting used to. The style of the dramatic scenes feeds into this offbeat approach. The design and lighting is noir-ish and melodramatic, while the performances are simultaneously naturalistic and presentational. I'm reminded of self-consciously styled films like Todd Haynes's Far from Heaven and Wong Kar Wai's In the Mood for Love, where the filmmakers find the humanity within an aesthetically specific artifice. However, Center Stage eschews the referential quality of the former film and the overwhelming sensuality of the latter. It's like an elegiac soap opera that gradually gains power as the film progresses.

Lawrence Ng is playboy Chang Ta-Min, who has been attached to Ruan since she was a teen. He cheats on her and drains her bank account, so she leaves him for an older, wealthier married man, Tang Chi-Shan (Han Chin). As portrayed in the film, Ruan doesn't seem to mind being a kept woman. It makes a comfortable life for herself, her mother, and her adopted daughter. Chang can't stand it, though, and publicizes the affair, positioning himself as an injured party. This causes Ruan to unravel.

Tony Leung Ka Fai (Election) plays director Tsai Chu-Sheng, who casts Ruan in a fact-based melodrama about a young actress who can't cope with societal pressures and kills herself. Leung is charmingly sweet and shy as Tsai, who clearly falls in love with Ruan during the making of their film. Center Stage, however, judges Tsai harshly as a hypocrite, for refusing to help Ruan when her circumstances begin to mirror those in the film they made and for ultimately bowing to pressure to cut the film and neuter its message.

Ruan's story is set within the context of a specific era in Chinese history -- with China under attack from Japan -- and some of the political implications informing certain dialogue exchanges and actions might take some decoding for viewers not properly versed in what was going on then.

Center Stage is a rich and layered film, offering simple cinematic pleasures and complicated ideas that require some processing. The self-conscious aspects of the film can sometimes come off a little precious and dated -- the use of black-and-white for the interview sections feels particularly '90s. On the other hand, when I try to picture the film without those elements, I see a far more forgettable film. As a self-critiquing film biography, Center Stage is a unique treat for cinephiles. 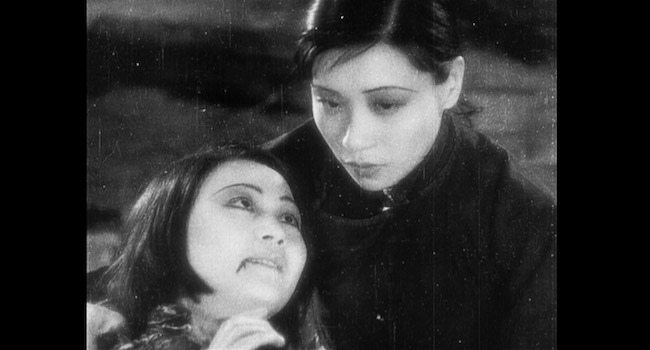 The Blu-ray
Center Stage is packaged with a booklet featuring an essay by Metrograph programmer Aliza Ma.

The Video:
The AVC-encoded 1080p 1.85:1 presentation is sourced from a new 4K restoration. Excellent clarity and well-resolved film grain. Colors and contrast are rich and pleasing. The black-and-white sequences look a little grainier, but it looks like a choice. Also, there is a slight and sporadic darkening at the bottom of the black-and-white footage -- presumably to facilitate subtitles, although the English subs do not sync up with the darkening and lightening -- and this becomes distracting.

The Audio:
The LPCM 2.0 mono is clean, clear, and well-supported. The box says the dialogue is a mixture of Cantonese and Mandarin, although the characters state at various times they are speaking in the Shanghainese dialect; as a non-speaker, I cannot know if this is actually the case. Optional English subtitles are provided for the bulk of the dialogue; a few brief exchanges in English are left unsubtitled.

Final Thoughts:
I was honestly surprised by Center Stage. I was expecting a tasteful period drama, but instead I discovered a tricky drama/doc hybrid that reflects on filmmaking, celebrity, politics, and love. The film looks great in this new remaster. Check it out! Highly Recommended. 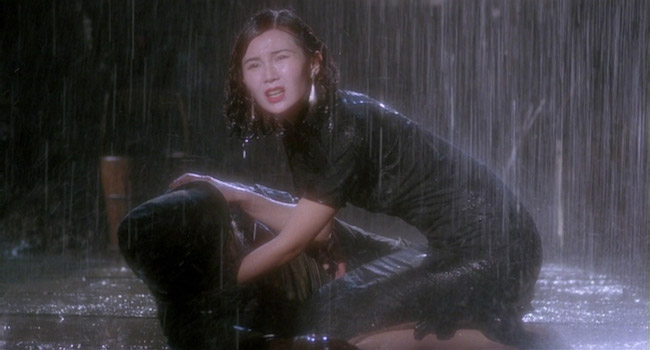