Kino // Unrated // July 27, 2021
List Price: $24.95 [Buy now and save at Amazon]
Review by Stuart Galbraith IV | posted June 29, 2021 | E-mail the Author
By 1965, actor James Stewart, pushing 60, was nearing the end of both his starring career in feature films and his long association with Universal Pictures. Shenandoah was his penultimate starring film for that company (The Rare Breed followed, in 1966) and this Civil War drama is a curious mix of family film blandness with an unexpectedly harder edge recalling Stewart's earlier, ‘50s Westerns made in collaboration with director Anthony Mann. Visually uninteresting and lacking historical verisimilitude, Shenandoah nonetheless comes off well for other reasons, and Stewart gives one of his better if more overlooked performances. 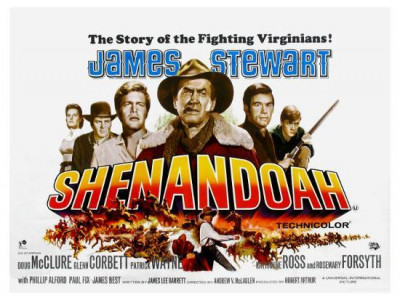 Set in 1864 Virginia, the film stars Stewart as Charlie Anderson, widower patriarch of the large Anderson farm, some 500 acres, and his equally big family: six sons and one daughter, all adults except the youngest, "Boy" (Phillip Alford, of To Kill a Mockingbird), who is sixteen. A resolute isolationist, Anderson is determined to keep his boys from joining the Confederacy: together they've built and maintained their big spread all by themselves, without slaves, so why should they fight someone else's battles?

After several subplots -- one concerning daughter Jennie (Rosemary Forsyth, in her screen debut) wanting to marry Confederate officer Sam (Doug McClure), another concerning the birth of Anderson's first grandchild, from second son James (Patrick Wayne) and daughter-in-law Ann (Katherine Ross, also debuting) -- the war inevitably begins encroaching on the Andersons' farm and lives, despite everyone's best efforts. After Boy and his friend, a slave from another family named Gabriel (Eugene Jackson, Jr.), stumble upon a Confederate ambush, a Union patrol mistakes Boy for a young Reb and takes him prisoner. Anderson and most of the family set out to find him, but as the Confederacy is on the verge of total collapse, finding Boy proves a near-impossibility.

Andrew V. McLaglen had been directing feature films since the mid-‘50s, but really made his mark in television, especially as the primary director on Gunsmoke for many seasons, where he ultimately helmed 96 episodes. He was usually assigned the best scripts and shows requiring extensive location work, which McLaglen gave a movie-like sheen. The son of actor Victor McLaglen and long associated with John Wayne (who produced but did not star in Andrew's first feature, Man in the Vault), the hit McLintock! (1963) established McLaglen as a major feature film director, the first of five films he did for Wayne. Shenandoah was McLaglen's next film, the first of three with Stewart.

Oddly, though, Shenandoah has little of the qualities McLaglen brought even to episodes of Gunsmoke. It's a very ordinary-looking movie, well-acted by Stewart but visually dull and lacking authentic historical atmosphere. It was a substantial hit, earning more than $17 against a cost of probably $3 million or less. The movie even looks a little cheap at times; a battle sequence that opens the film is actually stock footage from Raintree County (1958).

Some facets of James Lee Barrett's original screenplay ring inauthentic as well. While many southern white families did not own slaves, the movie largely skirts the basic question of slavery, preferring to focus on Anderson's isolationism, "sitting out the war" that eventually encroaches upon and brings great tragedy to his family anyway. With others in the village sacrificing their sons to the war, Anderson's actions, unmotivated by his religion, come off as principled yet selfish, though the movie under-develops these ideas.

Other than a few African-American Union soldiers seen briefly, Gabriel is the only black character in the story. Apparently, he's a slave from a nearby farm, but allowed to spend most of his time with Boy, fishing and the like, which seems unlikely in 1864 Virginia. Boy is mistaken for a Reb because he wears a Confederate cap he found floating in a river, yet no one in the family cautions him against wearing it, which equally improbable.

But Anderson's bullheaded determination to protect his family and, indeed, not even feel the impact of a war waging just beyond their property lines, is interesting, and Stewart impressively plays Anderson with a contained intensity often threatening to bubble to the surface. When even his Herculean efforts fail, and the family suffers multiple tragedies, Anderson's grief is palpable.

Probably at least in part McLaglen's doing, Shenandoah is chockfull of actors he'd frequently worked with before, on Gunsmoke and elsewhere. Some of these are awkward fits: Denver Pyle plays a Swedish-American minister, a part seemingly written for John Qualen or Karl Swenson. Pyle is okay, but his accent is downright bizarre, as much Irish as Scandinavian. On the other hand, George Kennedy is superb, cast against type as a world-weary Union colonel sympathetic to Anderson's search for Boy.

Licensed from Universal, Shenandoah is presented in its original 1.85:1 widescreen, seemingly sourcing an older high-def transfer. The image is adequate but unexceptional. The DTS-HD Master Audio (mono) is fine, and optional English subtitles are provided on this region "A" encoded disc.

Supplements include a new audio commentary by critics Michael F. Blake, C. Courtney Joyner, and Constantine Nasr. The Defiant Virginian is an 8mm (silent) digest version of the film, in black-and-white. It's a nice extra but the print sourced is in very poor condition, not really reflective of how good Universal-8 titles could look. A trailer rounds out the extras.

Shenandoah is the kind of good movie that could have been a lot better with a lot of fine-tuning and more care. It was eventually successfully adapted as a stage musical in the 1970s, starring John Cullum in Stewart's role. As for the movie, it's not great but has its strong moments and is Recommended.