Bureau: The Complete Series, The

A French espionage-political thriller, The Bureau (Le Bureau des Légendes, "The Bureau of Legends," 2015-present) is, for me, one of those cases where I-as-reviewer snapped up a title in our screener pile I knew nothing about, but took a chance on based on a handful of rave reviews I found on the Internet. Happily, those raves are largely justified; The Bureau is an excellent television series that's subtle and intelligent, adult, and timely as all get-out.

Overall, it has the look, tone, and pacing of recent Scandinavian detective shows, combined with a cynicism and paranoia not unlike the novels of John le Carré and, to a lesser degree, the adventure-thriller works of Alistair MacLean. A new DVD set of Seasons 1-5 is billed "The Complete Series," but it's unclear whether or not additional episodes might be made. For the purposes of this review I've made it through Seasons 1 and 2, the latter reportedly the best of the five, though some viewers argue it gets even better from there. 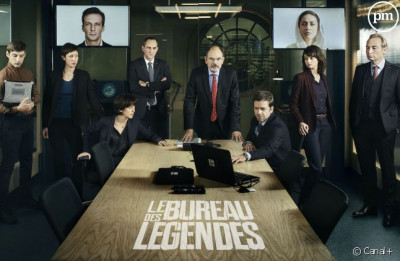 The series is primarily set at the DGSE, the Direction générale de la sécurité extérieure, or Directorate-General for External Security, France's real-life foreign intelligence agency, their CIA or MI6. Though it quickly evolves into an ensemble drama, the first season revolves primarily around highly-skilled agent Guillaume Debailly (Mathieu Kassovitz), codename "Malotru" (or "Lout"). The series open with Guillaume about to pull out of Damascus, Syria, where he's spent the last six years undercover, recruiting informants. Called back to Paris, he's forced to leave his girlfriend behind, beautiful Nadia El Mansour (Zineb Triki), a Syrian history professor unconnected with his spying activities. Nonetheless, per DGSE protocol, his false identity is wiped clean and he vanishes completely into the ether. Problem is they are deeply in love with one another, and when she turns up unexpectedly in Paris, they secretly renew their romance, threatening Guillaume's position at the Bureau, and perhaps even national security.

The first season and continuing into the second, the various story threads trace Guillaume's efforts to keep his continuing relationship with Nadia from his employers, even after it becomes clear that in Paris Nadia is somehow connected to secret political dealings between Syrian and Russian officials, negotiations already carefully monitored by the CIA. Meanwhile, another agent working undercover in Algeria, codename "Cyclone," has gone missing after a DUI arrest, possibly handed over to Muslim extremists. Marina, meanwhile works to establish a rapport with a high-ranking Iranian to win an official appointment in Tehran.

The first season does a fine job establishing its gallery of reticent characters, whose motives and means are uniformly ambiguous. The spy game, learns the audience, is all about never showing revealing emotions or allowing one's self to ever become close to anyone that, on DGSE orders, one might have to betray. Some of these betrayals, the ends justifying the means, are at times brutally cruel and unforgiving, requiring of each spy an ability to detach themselves from naturally-occurring human feelings. Trainer Marie-Jeanne, for instance, clearly becomes attached to the spies in the field on her watch (she seems to keep an unstated bisexual or maybe non-sexual love for both Guillaume and Marina to herself), yet in several episodes she casually orders innocent bystanders terrorized when they get in the way of their missions. Marina herself is tested multiple times, including kidnapped and put through an ordeal of humiliation, sleep-, water- and food-deprivation, psychological and physical tortures all to test her nerve before letting her loose.

Mostly in French but with a lot of scenes in English, Arabic, and other languages, The Bureau is truly international. It's not clear to this reviewer where all of it was shot, but much of it is set in Algeria, Syria, Iran, and elsewhere, and the locations, perhaps augmented by seamless CGI, all appear authentic. Also very impressive is that while the series relies on state-of-the-art technologies, everything is entirely believable, so much so the viewer may walk away feeling a little paranoid about how easy it is in this age of cellphones and laptops to track one's every move. Some of this is downright ingenious: a Muslim radical keeps in touch with his sister Paris through a simple code left on a website devoted to dogs with outrageous hairstyles. Likewise, the ways the Bureau's staff can so easily manipulate others is both clever and frightening.

It's also refreshing to watch a series of this type that connects so directly with current events. Gone are the days with spy shows and movies created fictional Iron Curtain, Middle Eastern or Central American regimes. This series names names and ties into current events in ways that are often fascinating. In one case, a French employee of the Bureau turns out to be a mole working for the CIA, partly because their spouse was killed in one of the 9/11 planes that struck the World Trade Center, the mole recruited soon after. The believability of The Bureau makes high-concept movies, even the James Bond films, seem ludicrous with their overreliance on technology and scenes of people able to do almost literally anything on a computer. When characters in The Bureau huddle around computer monitors, motivation, verisimilitude, and reason are omnipresent.

I also like that the program eschews stereotypes almost inevitable in American and British films and TV shows of its type. African and Middle Eastern countries are presented in modern, 21st century terms.

The acting across the board is impressive, particularly by supporting players Jean-Pierre Darroussin, Florence Loiret-Caille, Jonathan Zaccaï (as a veteran analyst), and, beginning in Season 2, Pauline Etienne as a neophyte analyst.

Shot digitally in high-def (ProRes 4444 HD) for 1.78:1 widescreen, The Bureau looks and sounds great, the 55-minute episodes presented on 15 single-sided, double-layered DVDs, with each season getting its own DVD case. The Dolby Stereo stereo surround is also impressive (though I've noticed on some episodes the left and right channels appear reversed. The English subtitles are generally excellent on these Region 1 encoded discs.

One of the best-ever shows of this type, The Bureau is a DVD Talk Collectors Series title.