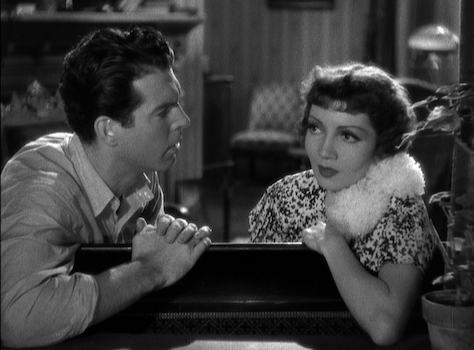 The Bride Comes Home (1935) is one of a trio of Claudette Colbert-Fred MacMurray romantic comedies that Kino Lorber Studio Classics is releasing on Blu-ray this summer. (The others are The Gilded Lily, also from '35, and 1943's No Time for Love.)

As a vehicle for Colbert and MacMurray, The Bride Comes Home shows off their unique and shared charms quite pleasantly. As a movie, it's a forgettable, undercooked trifle with moments of shocking brilliance. The premise in a nutshell is that Colbert is a poor little rich girl whose family has fallen on hard times. She goes out looking for work and enters the office of a men's magazine run by an old high-society chum (a young Robert Young, from Father Knows Best) who has been nursing a crush since she and he were both wee. Young hires Colbert on the spot, much to the annoyance of Young's bodyguard-turned-editor-in-chief, MacMurray. MacMurray and Colbert bicker because they like each other, and soon the newspaper angle is forgotten for a round of matrimonial musical chairs. Colbert decides to marry MacMurray, but then switches to Young, and then wonders if she should switch back again...

The direction by Wesley Ruggles and script credited to Claude Binyon (based on a story by Elisabeth Sanxay Holding) show intermittent signs of life but are mostly pretty flat and rote. The supporting cast does a lot to enliven the proceedings though. William Collier Sr. is an amusing old coot in the role of Colbert's down-on-his-luck dad. Famed master of the slow burn, Edgar Kennedy, steals the finale of the film as the greatly annoyed officiant of an increasingly crazy marriage ceremony.

This is far from a must-see, but fans of the stars will be pleasantly diverted. 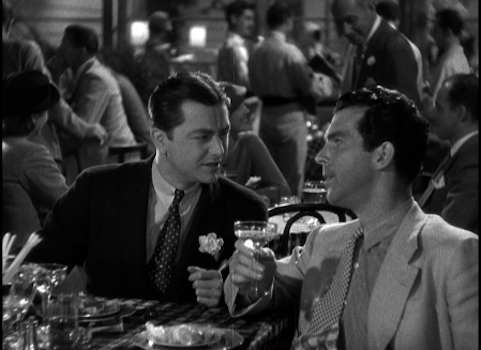 The Video:
The AVC-encoded 1080p 1.37:1 presentation is sourced from an old master with no digital restoration. The image is fairly crisp, with decent detail. Like most of the recent releases from Kino Lorber, the encode bitrate is extremely generous, so there are no noticeable digital compression issues. Still, the image shows consistent scratches and film wear, and it suffers from a frequent minor wobble (particularly noticeable on the opening title cards). It's still pretty watchable, but it doesn't compare to most modern scans and restorations of classic films.

The Audio:
The soundtrack is presented in a DTS-HD MA 2.0 mono audio mix that is a little quiet but is otherwise solid for a film of this age. No noticeable hiss or noise. The dialogue is fairly boxy and limited. An English subtitles option is included.

- Like a lot of Kino's scholarly commentaries of late, there isn't a lot of screen-specific analysis. But Gambin offers a throughly researched discussion of the main players of the film, in front and behind the camera. It's a worthwhile exploration of this era of studio romcom filmmaking.
Final Thoughts:
This one is probably more for completists than casual film lovers, but The Bride Comes Home offers enough cute moments and surprisingly big laughs (especially that Edgar Kennedy ending) that it comes mildly Recommended. 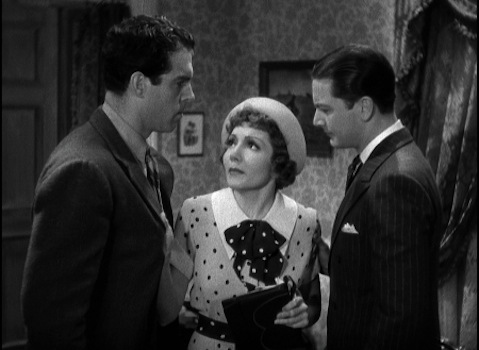