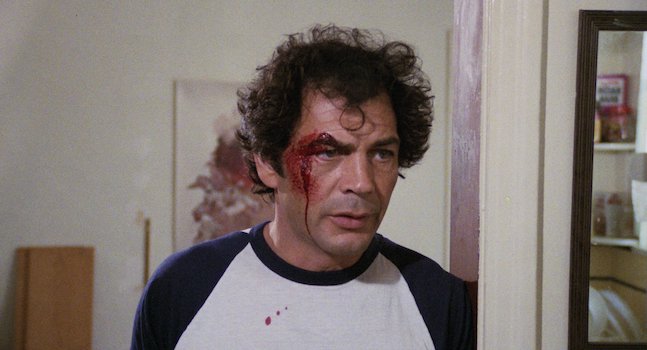 The 1983 crime thriller Walking the Edge finds future Oscar nominee Robert Forster (Jackie Brown) right in the thick of his run as an exploitation star. Forster plays Jason Walk, a former baseball pitcher turned numbers runner who operates out of a yellow cab. Walk is pegged as a man with an assertiveness problem, and he is first glimpsed in the film getting short-changed by a customer who won't pay up after a bad bet. One imagines the role being tailor-made for Forster, who specializes in men whose gruff charm is offset by an undercurrent of weariness.

Walk's world is thrown for a loop when Christine Holloway (Nancy Kwan) hails his cab. Christine has seen her husband and son gunned down in front of her, and she is on a mission of revenge. When she has Walk pull into a body shop, little does he know it's a front for the gang of killers, headed up by Brusstar (Joe Spinell). Christine manages to shoot one of the baddies in the head but misses the rest in the ensuing confusion. Walk decides to offer Christine a place to lay low and, before you know it, they're both marked for death.

Walking the Edge is a real treat. The flick has the bones of a black-and-white-era B-picture but its dialogue is ornamented with colorful, coarse language that places it firmly in the '80s. One of the standout moments in the film involves Jason Walk holding off an irate bar patron who wants to enter the bathroom he is in by yelling, "Shut the fuck up! I'm whacking off!" Not even Quentin Tarantino would have written that for Forster to say.*

Director Norbert Meisel vacillates between the sleazy and the sweet, and it works better than it honestly should. It certainly helps that Forster and Kwan make a compelling central couple, while Spinell is just one of the all-time great screen slimebags. Frankie Hill has a couple of great scenes as a streetwalker who alternately taunts Walk and helps him with his troubles. A Martinez (Powwow Highway) is similarly great as Walk's only friend, who sticks his neck out for his buddy probably more than he should.

The variety of tones don't all blend perfectly. Meisel's approach to violence is gore-heavy and honestly seems more appropriate for a slasher flick. His decision to intercut Walk and Christine's love scene with images of bloody torture -- and not quick cuts either -- is tonally awkward and downright confusing. On the other hand, especially considering that Walk's first name is Jason, it's kind of fun to see Forster's character taunt Spinell's baddie with the corpses of his dispatched friends.

Genre fans and fans of seeing different eras of Los Angeles depicted onscreen should have a tawdry good time with this one.

*To be fair, on the included archival audio commentary, Forster says that he thinks he improvised the line. 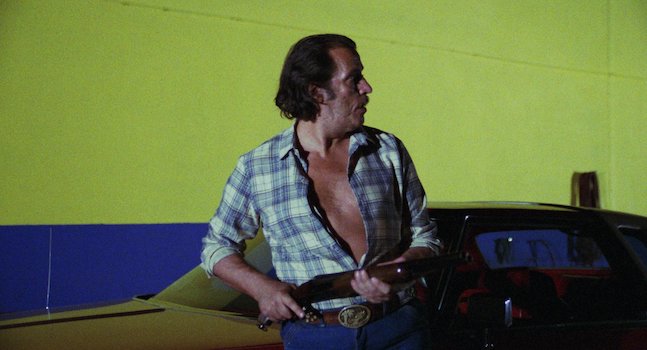 The Blu-ray
Walking the Edge comes with reversible cover art and a booklet featuring an essay by Jim Hemphill. Like all Fun City Editions titles so far, the initial run is offered with a limited edition slipcover on the Vinegar Syndrome site.

The Video:
Sourced from a new 4K restoration, this AVC-encoded 1080p 1.85:1 presentation is outstanding. Excellent clarity and rich colors. Minimal dirt and damage, and an overall satisfying filmic texture. Pardon the cliche, but one imagines this film looks better here than in its original release.

The Audio:
One element immediately stands out from the DTS-HD MA 2.0 audio mix, and that is Jay Chattaway's funk jazz score. Sure, the style positively screams "1983!" but it's hard to deny that it is crisply mixed, with the slap bass offering a nicely propulsive energy. Dialogue and other ambience are layered in well. Certain other online reviews of this Blu-ray note that the disc offers no subtitles, but the version I watched was an updated replacement version with one subtitle option: English SDH.

- The first is a new discussion between exploitation experts Chris Poggiali and Matt Verboys, and it's chock full of all sorts of background info and trivia. The second is carried over from the 2000 Anchor Bay DVD and features a discussion with Robert Forster, Nancy Kwan, and director Norbert Meisel, moderated by Dave Szulkin. Despite some dead spots, it's an entertaining chat between old colleagues.

Final Thoughts:
Walking the Edge is an exploitation gem. It's loose, it's bonkers, and it's proof that Robert Forster is a movie star no matter what kind of flick you stick him in. The rest of the cast, including Nancy Kwan and Joe Spinell, are no slouches either. Fun City Editions' disc is so lovingly made that it's a must-own for fans of the tough and tawdry. Highly Recommended. 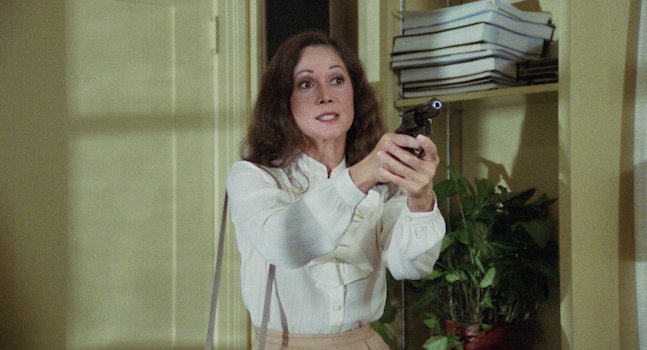