Maverick director Samuel Fuller's movies, even those he made working within conventional Hollywood genres, are invariably off-kilter, unusual and engagingly innovative, and populated by colorful characters of the type and/or preciseness one rarely found in ordinary movies. Pickup on South Street (1953), Fuller's second feature for 20th Century-Fox, has elements of film noir and Cold War espionage but the film subverts many of those genre conventions, mainly because Fuller finds its low-life characters fascinating and is largely nonjudgmental of their petty criminal activities, at times even admiring them.

Fuller certainly admires Skip McCoy, the pickpocket played by Richard Widmark, who despite his utter lack of "patriotism" in combating fifth columnist menace, becomes the film's unlikely hero. The picture surprises in many other ways, too, with several outstanding, sometimes unexpectedly good performances; flashes of violence pushing Production Code restrictions to its limits; an anticommunist underpinning that turns out to be irrelevant; and a continually fascinating mixture of intimate character study and "pure cinema" storytelling. 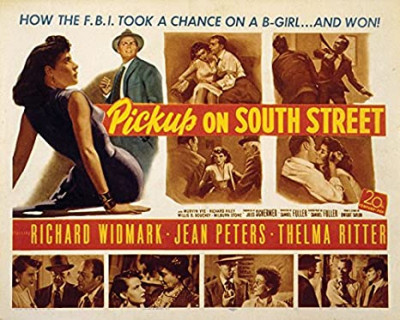 The complicated premise, supposedly based on a story by Dwight Taylor but written almost entirely new by Fuller, opens on a cramped New York subway where Skip (Widmark), a professional "cannon," steals a wallet from Candy's (Jean Peters) handbag. Neither is aware that two police detectives have Candy under surveillance and witnessed the crime.

She's being followed as part of an investigation into a spy ring and, indeed, inside the stolen wallet Skip finds an envelope of top-secret microfilm B-girl Candy agreed to deliver on behalf of her ex-lover, Joey (Richard Kiley), who's been passing information to Communist agents, though Candy is oblivious of this.

Police Capt. Dan Tiger (Murvyn Vye) tracks Skip down thanks to tips provided by paid informant Moe (Thelma Ritter), who's been saving up her dough to avoid being buried in Potter's Field. ("It would kill me," she says.) Both Tiger's detectives (including those played by Milburn Stone, Willis Bouchey, and Stuart Randall) and increasingly anxious Joey, under pressure from his commie contacts (Parley Baer and George Eldredge), converge on Skip's waterfront shack, Joey still using Candy to get the film back.

But Skip's no dope, realizing the value of the film and, utterly disinterested in Cold War-era politics, is only too happy to finally make a big score selling the film back to the red agents.

Pickup on South Street is one of a small handful of movies, American ones at least, exploring this very particular milieu. Harry in Your Pocket (1973), about a "wire mob," a gang of pickpockets, comes to mind, which explores the mechanics of pickpocketing with character studies of those in that profession; and House of Games (1987), David Mamet's psychological study of obsession in the world of con artists.

In Pickup, Fuller clearly is interested in how these petty thieves operate and their unspoken code about one another. In an early scene Ritter's Moe asks one of the detectives who witnessed Skip's pickpocketing to describe it in minute detail: Was he reading a newspaper? The headlines or the classifieds? How did he hold it in his hand? Which hand? Every cannon, she explains has his own unique style. Later, when she informs the cops where Skip lives, Skip doesn't mind: "She's gotta eat, too," he says. In the extra features, Fuller describes a meeting with Fox studio head and FBI Director J. Edgar Hoover, recalling with great relish Hoover's apoplexic reaction to Skip's lack of "patriotism," his willingness to sell out America -- and he's the hero!

Fuller surprises in other ways. A scene with Joey beating Candy is unusually brutal and chaotic for the period, they crashing into furniture and stumbling in the mayhem. Jean Peters never made much of an impression as an actress, remembered today more for her marriage to billionaire Howard Hughes than her movie credits. But she's genuinely impressive throughout Pickup on South Street, convincing as a uneducated, almost ordinary girl too dumb to understand the whirlwind of intrigue she finds herself at the center of, attracted to Skip but unable to really see either his good or bad points.

Fuller's direction is less flashy than his previous feature, Park Row (1952), his best film in this writer's opinion, but he makes some marvelous choices throughout. Most memorable is a long monologue by Thelma Ritter's Moe, Fuller's camera slowly moving in on the actress, almost completely ignoring the other character in the room. That scene won Ritter her fourth consecutive Best Supporting Actress Oscar nomination; she steals the film, but aided and abetted by Fuller.

High-def transfers of Fox titles of this period are real hit-and-miss, but Pickup on South Street, presented in its original black-and-white, standard (1.37:1) framing looks great throughout, with inky blacks and recreated New York backstreets one can almost smell in this new 4K transfer. The mono audio, sourced from the 35mm optical soundtrack negative is also well above average. SDH subtitles are offered on this region "A" encoded disc.

Criterion's supplements include: a new interview/video essay by critic and noir specialist Imogen Sara Smith; a lively 1989 interview with Fuller, focusing on Pickup on South Street; a rather amazing 1982 French TV film, with Fuller dissecting Pickup's long opening scene aboard the subway car, told visually and bereft of dialogue. (Fuller uses a Moviola or flat-bed editor of some kind, but the effect is like a pre-laserdisc era audio commentary.) Also included is a 1954 radio adaptation featuring Ritter, trailers for nearly all of Fuller's movies, and a fat booklet featuring essays by Luc Sante, Martin Scorsese, and Fuller himself.